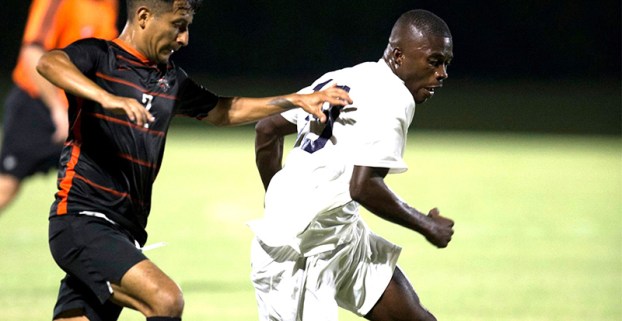 GSW junior forward Divin Moke (19) scored the lone goal of the match for the Hurricanes in GSW’s 4-1 to Auburn University at Montgomery (AUM). Photo by GSW

Early goals by AUM too much for Hurricanes to overcome

MONTGOMERY, AL – Auburn University at Montgomery (AUM) scored three goals in a span of six minutes midway through the first half and went on to defeat Georgia Southwestern State (GSW) 4-1 in a non-conference matchup on Wednesday, September 18, at the AUM Soccer Complex.

The Hurricanes have now lost three straight games and drop to 1-3 overall on the season, while the Warhawks improve to 2-3.

However, the Hurricanes were not able to draw any closer and AUM struck again in the 70th minute when Alexis Arriaga scored to secure the 4-1 victory for the Warhawks.

AUM had a total of six shots on goal in the match, while the Hurricanes were held to four. The Hurricanes came into Wednesday’s game ranked seventh in the nation in NCAA Division II in the accumulation of yellow cards (12), but did not draw a card in Wednesday’s match.

GSW goalkeeper Oneil Lewis had one save for the Hurricanes and Kellan O’Hara led GSW with three shots on goal.

The Hurricanes will try to stop their three-game losing streak when they travel to Rome, GA to face Shorter University on Saturday, September 21. Kickoff is scheduled for 4 p.m.