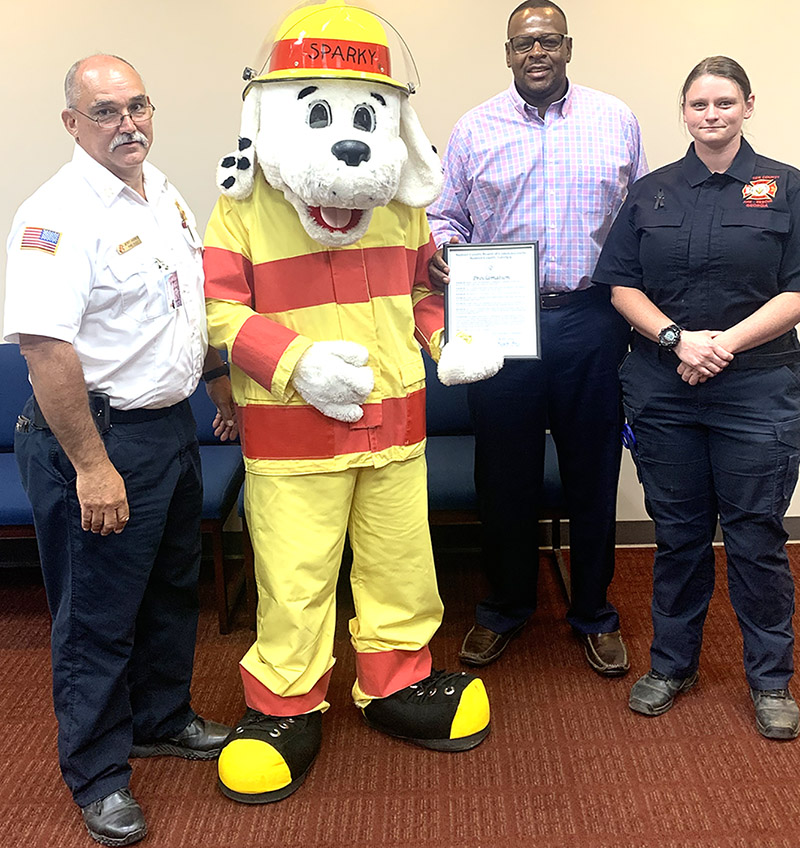 Commissioner Mark Waddell was not present at the meeting due to personal business.

Board Chairman Clay Jones presented a proclamation plaque commemorating the occasion to Sumter County Fire and Rescue Chief Jerry Harmon. Sumter County firefighter Sabrina Rueda and the Sumter Fire & Rescue mascot Sparky joined Harmon in the presentation of the plaque. The theme for Fire Prevention Week is “Not every hero wears a cape. Plan and practice your escape.”

Later in the meeting, Harmon told the board that his department spent most of the day conducting interviews to fill several vacancies and that there would be a few more interviews to be conducted the following morning. Harmon also mentioned that the Sumter County Fair is coming to town next week and that Sumter County Fire & Rescue is getting prepared for it. “We’ve been working really close with them (the fair organizers). We had a meeting today to try to finalize some details,” Harmon said. He also mentioned that the department will be at the Plains Peanut Festival on Saturday, Sept. 28, where they will conduct a public education seminar. Harmon also stated that Sumter Fire & Rescue is still trying to get their numbers up to 88 firefighters on staff by the end of September.

The board approved Resolution Number 2019-088 for the appointment of Alphonso Baker to the Sumter County Board of Tax Assessors. General Operations Administrator and County Clerk Rayetta Volley stated that the board of commissioners approved Baker’s appointment to the tax assessors’ board at the work session on Sept. 10, but that resolutions are needed for these particular appointments.

Jones asked for a motion to approve Resolution Number 2019-088 for the appointment of Baker, which was made by Commissioner George Torbert and seconded by Commissioner Scott Roberson. It passed unanimously.

Roberson made a motion to go into closed session which was seconded by Torbert, and passed unanimously.