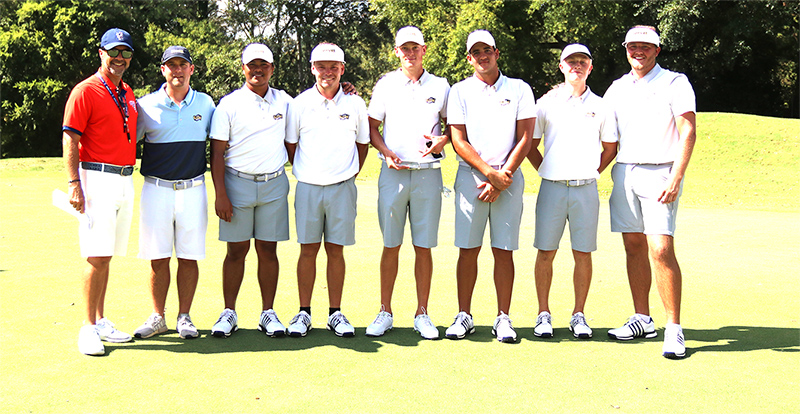 The Georgia Southwestern State University men’s golf team won the AFLAC/Cougar Invitational, which was played this past Monday and Tuesday, September 23-24, at the Country Club of Columbus in Columbus, GA. Photo by Arthur Thompson

COLUMBUS, GA – A final score of 848 marked the lowest 54-hole total score in school history as the Georgia Southwestern State University men’s golf team carried a Round 3 low score of 280 (-4) to win the AFLAC/Cougar Invitational. The tournament was played Monday and Tuesday, September 23-24, at the Country Club of Columbus.

After ending the first day of competition in fifth place, the Hurricanes continued to rise up the leaderboard to win their first tournament of the 2019-2020 season.

Vincent Norman opened his senior year with a remarkable first-place win by shooting rounds of 71, 67 and 68 for a seven-under-par 206. Norman is tied for most individual wins (3) in GSW history.

The Hurricanes previously won the AFLAC/Cougar Invitational back in 2011, shooting an 856 (+4).

Up next for the Hurricanes is the GolfRank Invitational Tuesday and Wednesday, October 7-8, at the PGA National Champions Course in Palm Beach Gardens, FL. The tournament will be hosted by Nova Southeastern University.