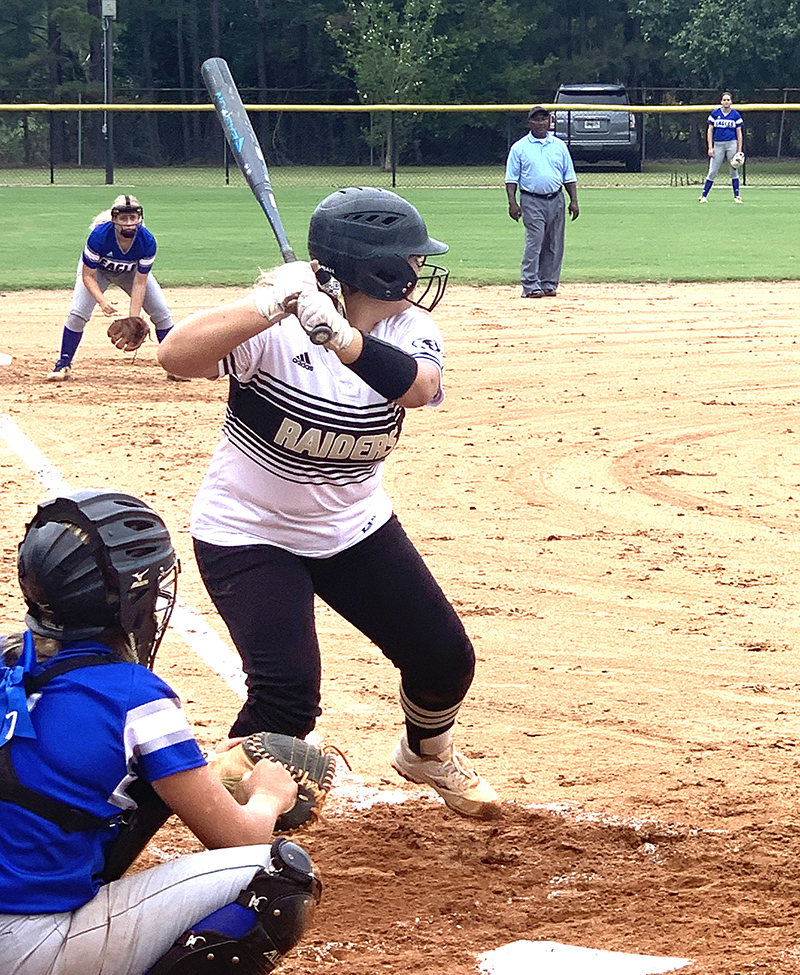 Southland Academy catcher Sara Beth Storey is seen here batting in a game earlier this season. Storey went 1-for-3 with a two-run double in the loss to SGA. ATR Archive

DAMASCUS, GA – Coming off a dominating 13-1 victory at Brookwood on Thursday, September 26, the Southland Academy (SA) Raider softball team traveled to Damascus, GA with the expectation of toppling the Warriors of Southwest Georgia Academy (SGA). Unfortunately for the Raiders, they struggled defensively by committing five errors. SGA took advantage of those errors and defeated SA 9-3 on Monday, September 30, at the SGA softball complex in Damascus, GA.

The Raiders also struggled offensively. They were only able to muster six hits on the night against SGA pitcher Savana Bradford. Bradford pitched all seven innings and gave up three runs on six hits. She also struck out nine SA hitters in the process.

The Warriors scored one run in the bottom of the first inning, but the Raiders were able to take a 2-1 lead in the top of the third. Morgan Weaver and Lightner both singled to lead off the frame. Alli Dent then executed a sacrifice bunt, moving Weaver to third and Lightner to second base. After Morgan Minick struck out for the second out, Storey belted a two-run double to left field to give the Raiders a 2-1 lead.

However, it didn’t last long. The Warriors scored three runs on a single, a walk and two errors in the bottom of the third to take a 4-2 lead.

The Raiders were able to cut their deficit to 4-3 by scoring a run in the top of the fifth. Minick led off the frame by getting hit by a pitch. Later on in the inning with two outs, Minick stole third base and scored on a wild pitch.

Gillian Still led the Warriors’ offensive attack by going 2-for-3 at the plate with one RBI and Kate Hattaway went 2-for-4 with a double and two RBIs.

SA starting pitcher Alli Dent pitched six innings. Dent gave up nine runs on 10 hits, but only four of those nine runs were earned. She walked two batters and struck out three.

With the loss, the Raiders fall to 9-9 overall and 4-2 in the Region 3-AAA standings. They are currently in second place in the region and trail Valwood (6-0) by two games. The Raiders will try to get back into the win column when they host Windsor Academy on Thursday, October 2. It will be Senior Day that day, and the Raiders will honor seniors Abby Lightner and Rylan Youngdale. First pitch is scheduled for 4:30 p.m.