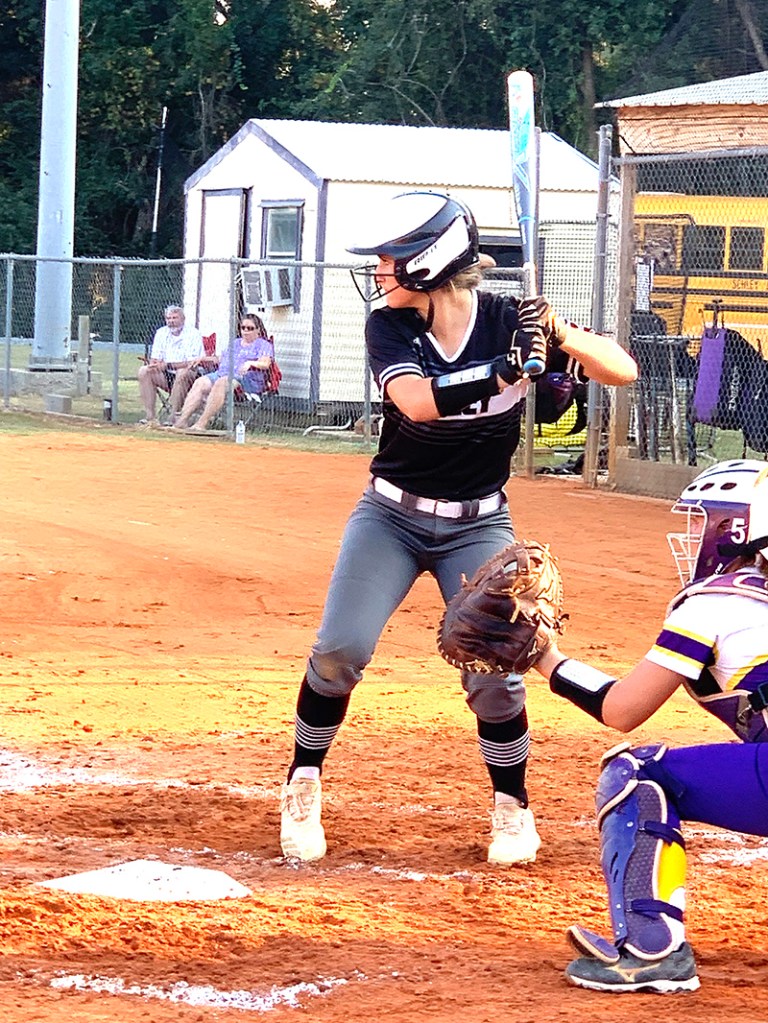 Schley County first baseman Berkely Goodin went 2-for-4 at the plate with two RBIS to help lead the Wildcats to a 12-2 win over Crawford County. Photo by Ken Gustafson

The Wildcats (19-5, 12-2) were able to exact revenge after losing to CC by the score of 7-2 in Ellaville back on Tuesday, September 3. “I knew we were better than them. We lost to them earlier in the year and didn’t take them seriously. We let one get away from us. It’s nice to bounce back and not take them for granted and play our game and see how we come out,” SC head coach Jody Sellars said. “We did a little bit of everything. We bunted well. We hit it well. We didn’t play defense well at times. We’ve got to clean that up. Typically, that’s uncharacteristic of us, but I like where we’re at. We’ve played four solid games overall out of the last five that we’ve played.”

Even though the Wildcats won, they too struggled defensively. They committed seven errors in the contest. 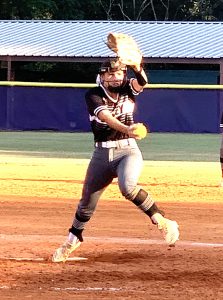 Schley County starting pitcher Saige Whaley had another excellent outing. She gave up only two runs on four hits to lead the Wildcats to a 12-2 win over Crawford County.
Photo by Ken Gustafson

SC pitcher Saige Whaley continued her good work in the circle. Whaley gave up two unearned runs on four hits, struck out one batter and walked none.

Both teams scored a run in the first inning, but the Wildcats were able to take a 3-1 lead in the top of the second. Perri DeVane led off the inning by laying down a bunt and reaching on an error by CC pitcher Riley Scaggs. DeVane was able to advance all the way to third base on the error. DeVane was then able to score on another error, giving her an inside-the-park home run. 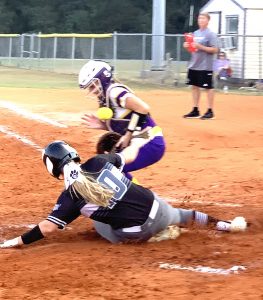 Schley County’s Rene Rix slides safely into home plate.
Rix was 1-for-4 with a run scored and two RBIs in the Wildcats’ win.
Photo by Ken Gustafson

Goodin then singled to left field, but was thrown out trying to steal second base. Crawford then struck out for the second out of the inning. With two outs, Tamia Kelley reached on another CC error, stole second and advanced to third on a passed ball. Alexis Bradshaw then drew a walk, putting runners on first and third with two outs. Kelley then scored on another CC error to give SC a 3-1 lead.

The Wildcats added two more runs in the top of the third. Saige Whaley led off the inning with a walk. After Landry Whaley popped out to shortstop, DeVane executed a bunt single, putting runners on first and second with one out. Whaley and DeVane advanced to third and second respectively thanks to an error by CC shortstop Selena Linsenbach. Goodin then hit into a fielder’s choice, scoring Whaley from third. Crawford then belted an RBI single into right field to give the Wildcats a 5-1 lead. 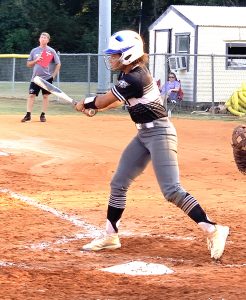 SC right fielder Tamia Kelley went 1-for-4 with two runs scored to help the Wildcats in the 12-2 victory over Crawford County.
Photo by Ken Gustafson

SC added three more runs in the top of the fourth inning to take an 8-1 lead. The Wildcats took advantage of two errors committed by the Eagles. The big hit in the inning was Landry Whaley’s two-run double.

CC answered in the bottom of the fourth with a run, but the Wildcats would later put the game away for good in the top of the seventh. They scored four runs on five hits to secure their 12-2 victory.

Like many softball teams around the state, the Wildcats have a ritual that they use to bring them good luck. They hang a small baby doll on the fence in the dugout. Each player will touch the doll for good luck before they go up to bat. In Tuesday’s game against the Eagles, some of the SC players were “slapping” the doll, causing them to have fun and joke about “slapping the baby.” 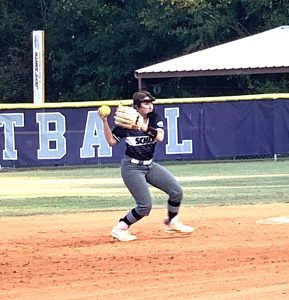 SC shortstop Hannah Crawford fields a ground ball. Crawford was 1-for-4 with a single and two RBIs.
Photo by Ken Gustafson

According to Sheila DeVane, Perri DeVane’s mother, the doll belongs to Whitely Robinson, the daughter of SC assistant coach Hannah Robinson. After one particular game earlier in the season in which the Wildcats played really well, the doll was left in the dugout. Being that they played so well, the team decided to use the doll as a good luck charm. The team has been “slapping the baby” ever since. The SC players have actually given the doll a name: Meredith Lucille Schley. 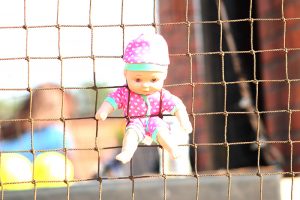 This is Meredith Lucille Schley: the doll that each SC player touches to bring them good luck before they go up to gat in a game.
Photo by Sheila DeVane

The Wildcats will finish the regular season on Wednesday, October 2, when they host Westfield on Senior Day. Nyiah Kelley, Tamia Kelley, Saige Whaley and Alexis Bradshaw will all be honored on Senior Day. First pitch is scheduled for 5:30 p.m