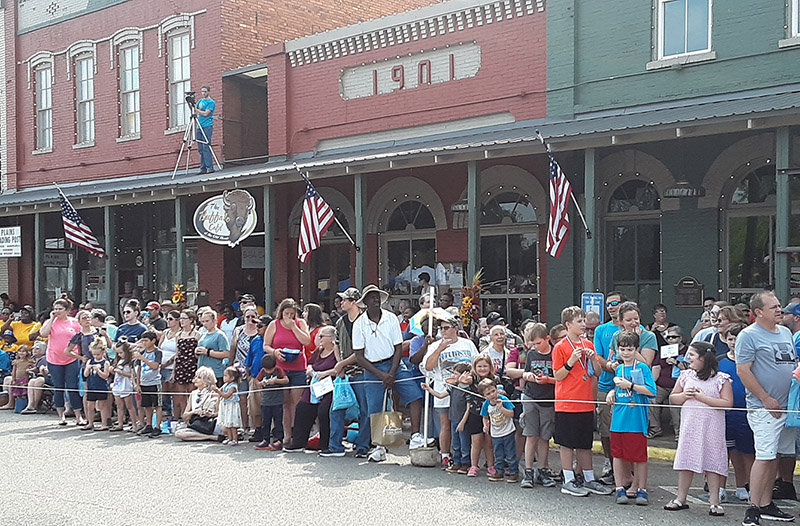 Crowds lined the downtown street Saturday awaiting the start of the parade at the 23rd annual Plains Peanut Festival.

PLAINS — As the crowds gathered Saturday alongside the main roadway, the anticipation of the crowds could be heard through excited chattering at the annual Plains Peanut Festival. Traditional parade tunes were played for the introduction. However, there was a special feature this year, as former President Jimmy Carter and former first lady Rosalynn waved and looked on from the balcony of the Plains Historic Inn, as “Happy Birthday” was played, and the crowds joined into sing happy birthday to the former president. 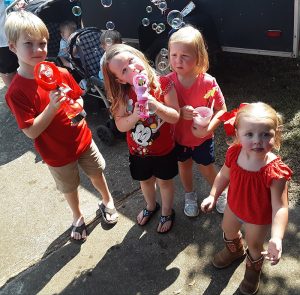 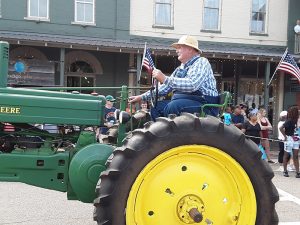 In the center of the downtown park area, across the street from the Inn, a huge replica of a patriotic birthday cake stood, approximately 13 feet tall, with a big number 95 crowning the top of the cake to commemorate Jimmy Carter’s birthday on Oct. 1. 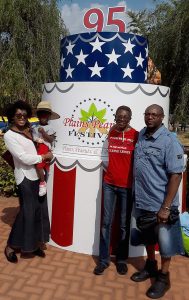 After the crowds sang, the parade started with its participants consisting mainly of farmers and their tractors, forestry queens and their crowns, the Plains Boys and Girls Club, and magnificent music of local marching bands. Former Sumter County Commissioner Bill Bowen was one of the participants riding his tractor. 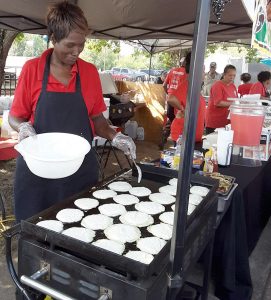 Other attractions included arts and crafts, food, drinks, and rides for the children. Various vendors lined the streets of the park area, from near and far. Many vendors have been coming to the festival for decades. 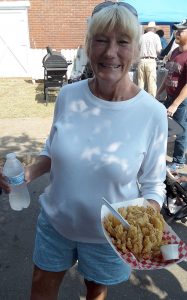 Cindy Harris of Plains is ready to sample the funnel cakes at the Plains Peanut Festival.

Members of the crowd cooled themselves off with a glass of lemonade, soda, Italian ice, and good old Southern sweet iced tea. 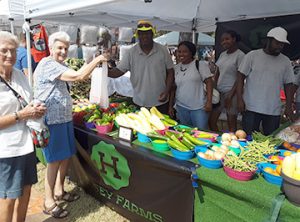 A group in the crowd, standing beside the birthday cake, were from Albany. They were the family of the late Steven Minter. “My uncle who just passed away, and was personally recommended by President Carter to serve as Secretary of the United States Department of Education; this was when the department was first implemented,” said Andrea Lewis, who attended of the parade with her parents, Al and Val Lewis, along with her daughter Adynn Lewis Dupont. Lewis said she was hoping to speak with the former president and see if he was coming to the memorial of her late uncle on Nov 2. 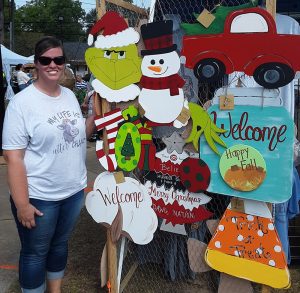 Ashley Perryman of Richland is shown with her handmade door hangers.

The scent of funnel cakes filled the air, as homemade goodies such as apple pies, jellies, and candy apples were purchased by passers-by. The family of Julie and Gordy Bonner was found strolling through the kiddie rides. Eight-year-old Parks said he was having fun until he rode the airplanes. “They made me sick!” he said with a frown, pointing to the airplanes, as he stood beside his six-year-old sister Chandler, who held up her prize gold fish, all tied up in a plastic bag, filled halfway with water. 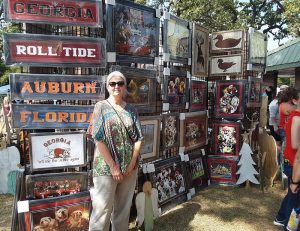 Penny Whitlet from Plains is shown with her collegiate-themed items for sale.

As children’s voices and laughter echoed through the streets lined with vendors, American flags, which patriotically decorated the park and downtown area, fluttered in the wind, as the hot breezes filtered in over the sweltering heat of the day. 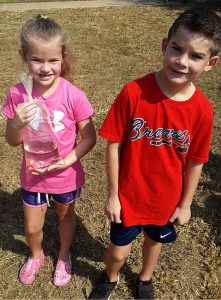 The scent of boiled peanuts also wafted across the air, as crowds lined up for a bite to eat from Kate’s Soul Food. Marolyn Willis from Preston was found frying water hoecake bread. Willis said, “Kate’s Soul food has been participating in the festival for 12 years now.” 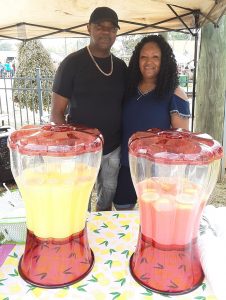 Ronnie and Valerie Crimes did a brisk business with cold lemonade during the sweltering heat of the Plains Peanut Festival on Saturday.

Alisha Perryman was found standing beside her door hangers. She said it was her first year attending the festival as a vendor. Another vendor, Penny Whitley of Plains, was found promoting her collegiate home décor and accessories. 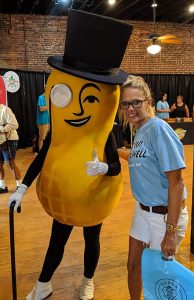 Again, Plains was the perfect host for a downhome good time for family and friends to reunite and celebrate some of the blessings of living in the south: peanuts, a former U.S. president, music, food, and fun.