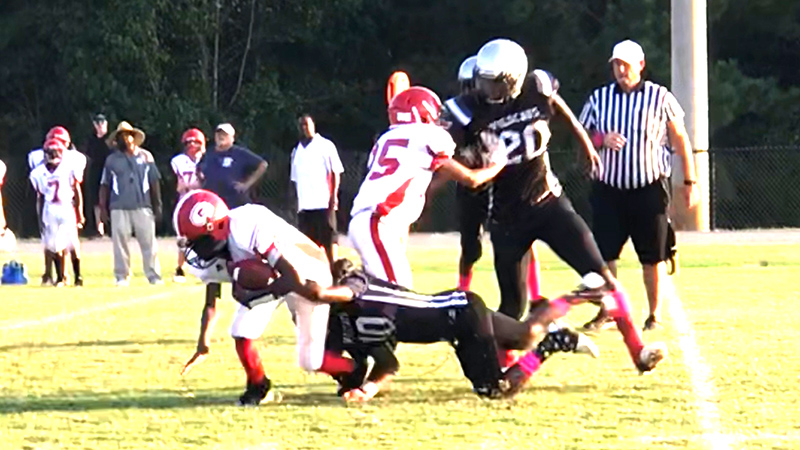 Kabreon Aldridge of the SCMS football team (10) makes a tackle in the 40-6 win over Greenville. Photo by Shelley Bishop

ELLAVILLE – Led by running back Jalewis Solomon’s three touchdowns, the Schley County Middle School football team (SCMS) took control early and never looked back on their way to a 40-6 rout of Greenville Middle School (GMS) in the first round of the Region 4 Middle School Playoffs.

The Wildcats scored their first touchdown with 2:11 left in the first quarter. Running back Zayden Walker ran the ball 56 yards for the Wildcats’ first points of the game. Jack Clark scored the two-point conversion to give SCMS an 8-0 lead.

Then with 1:41 left in the first half, Solomon scored the first of his three touchdowns on a 14-yard run. Clark scored another two-point try to increase the Wildcats’ lead to 16-0 at halftime.

SCMS quarterback Jay Kanazawa is back to throw. Kanazawa threw a 44-yard touchdown pass in the win over GMS.
Photo by Shelley Bishop

In the second half, the Wildcats continued to dominate. With 7:30 to go in the third quarter, SCMS quarterback Jay Kanazawa threw a 44-yard touchdown pass to Clark. Walker scored the two-point conversion and the Wildcats were up 24-0.

Solomon scored his second touchdown on a five-yard run. Clark scored another two-point conversion and the Wildcats were up 32-0 with 5:45 to go in the third quarter. 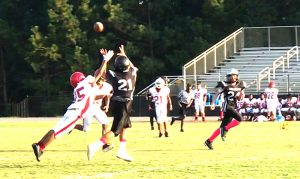 Jack Clark (21) goes up to catch a pass.
Photo by Shelley Bishop

Then with 2:37 to go in the third, Solomon scored his third touchdown of the day by scampering 22 yards to the end zone. Solomon scored on the two-point conversion attempt to complete the scoring for the Wildcats.

GMS scored a touchdown with 51 seconds left in the game, but by then, the Wildcats had done what they needed to do and were victorious by the score of 40-6.

Up next for the wildcats is a trip to Manchester, GA to take on the Blue Devils of Manchester Middle School on Wednesday, October 9. Kickoff is scheduled for 5 p.m.