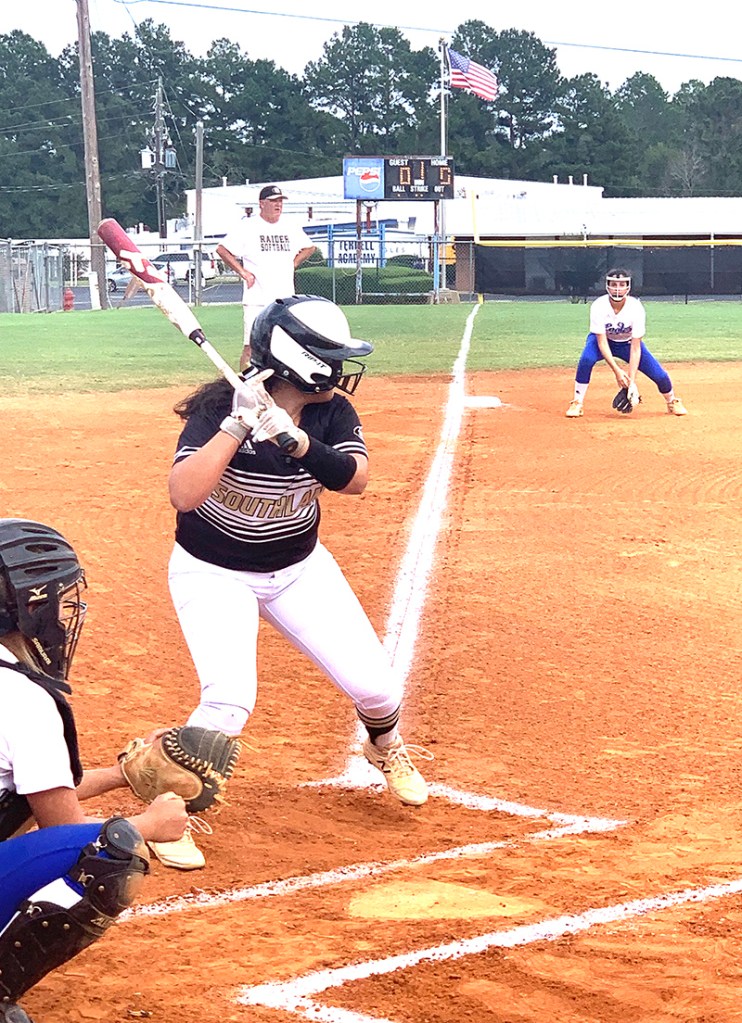 Southland Academy right fielder Katie Rogers went 3-for-4 with an RBI double to lead the Raiders’ offensive attack in their 8-6 loss at Terrell Academy. Photo by Ken Gustafson

DAWSON, GA – In spite of scoring six runs on 12 hits, the Southland Academy Raider softball team (SA) lost to Terrell Academy (TA) by the score of 8-6 in a non-region game on Monday, October 7, at the TA softball complex.

While the Raiders were able to score runs, they had opportunities in the later innings to score more runs, but were unable to capitalize. For the game, the Raiders stranded a total of eight runners in scoring position.

“We hit the ball really well in the first two innings…got four runs and then didn’t get much offense after that,” SA head coach Rusty Tondee said. “We had the bases loaded twice in the fifth and sixth innings with less than two outs and only scored one run. You have to take advantage of those chances and make it hurt and we didn’t do that today.” 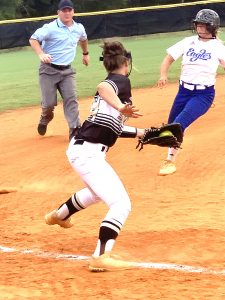 Going into the top of the second inning, the game was tied 1-1, but the Raiders got the bats going. Reese Roland led off the inning with a double to center field. Dent followed that up with a single, advancing Roland to third with no outs. After Dent stole second base, Roland was able to score on an error by the TA third baseman. Dent advanced to third on that same error and Morgan Minick drew a walk, putting runners at the corners with no outs. 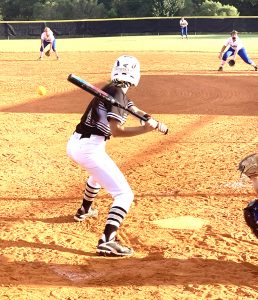 Morgan Weaver gets a single in the top of the sixth inning for the Raiders. Weaver went 1-for-5 for the game with a run scored.
Photo by Ken Gustafson

SA took advantage of the situation when Abby Lightner drove in two more runs on an RBI single, giving the Raiders a 4-1 lead.

However, the Eagles responded in the bottom of the third with three runs on four hits to tie the game.

Then in the bottom of the fourth, TA scored three more runs. The Eagles took advantage of two walks, an error and a hit batsman. The big play came when Sierra Brogdon belted a two-run double to give TA a 6-4 lead. Emma Jackson was thrown out at home plate for the second out, but the Eagles were able to score another run, giving themselves a 7-4 lead.

In the top of the fifth inning, the Raiders had a chance to tie or take the lead. Rogers knocked a leadoff single into left field and Holly McCain drew a walk to put runners at first and second with no outs. However, Roland flew out to right field and Dent flew out to center field. Morgan Minick singled to load the bases for Lightner, but she grounded into a fielder’s choice to end the threat.

The Raiders were able to score a run in the top of the sixth. With the bases loaded and one out, McCain drove in Morgan Weaver on a fielder’s choice. However, with a runner on second and two outs, Roland grounded out to second base to end the inning.

The Eagles scored another run in the bottom of the sixth to take an 8-5 lead, but the Raiders had one last chance in the seventh to tie or even take the lead. Dent led off with a single. Even though Minick struck out, the TA catcher dropped the strike three pitch, allowing Dent to advance all the way to third base. Dent would then score on a passed ball to cut the SA deficit to 8-6. However, both Lightner and Weaver struck out to end the game.

SA pitcher Rylan Youngdale gave up eight runs on 11 hits in the ball game. She struck out three batters and walked two. Brogdon was the hot hitter for the Eagles. She went 3-for-4 with two runs scored and two RBIs.

Allie Debary started in the circle for TA. Debary gave up six runs on 12 hits in seven innings of work. She struck out three batters and walked three.

With the exception of one error, the Raider defense was solid. On the other hand, the Eagles committed four errors on the day.

With the loss, the Raiders drop to 9-11 overall and have now lost three straight games. They will try to end their losing streak when they host Crisp Academy in their regular season finale on Tuesday, October 8, at 4:30 p.m.