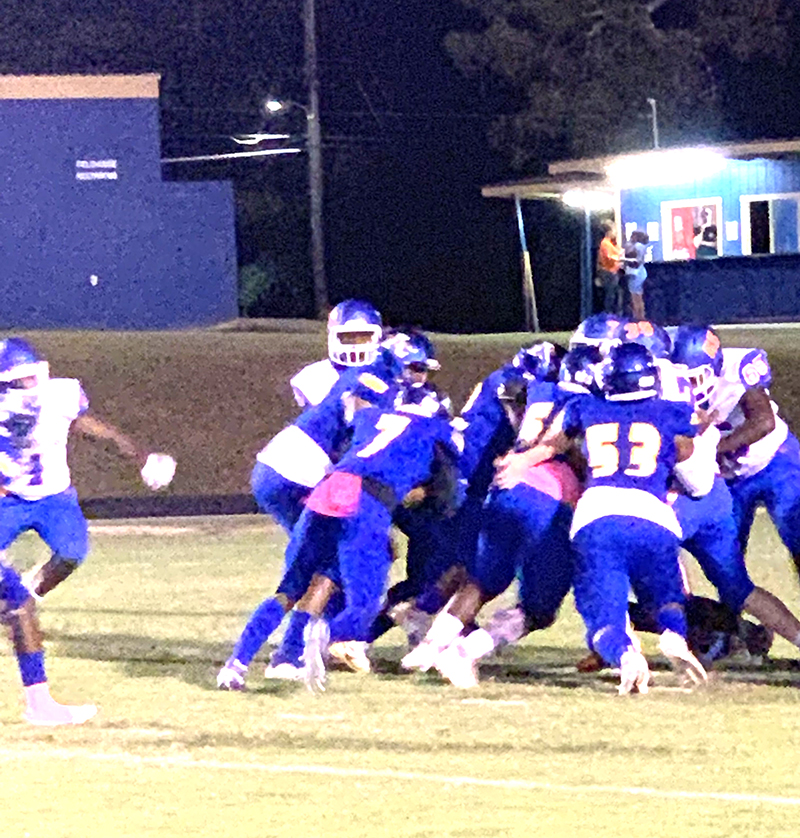 ASHS quarterback Kanova Willoughby (7) gets the necessary inches on fourth down to get a first down inside the CHS five-yard line. The Panthers would later score on the drive. Photo by Ken Gustafson

AMERICUS – The Americus-Sumter Panther football team (ASHS) made good use of a desperately needed night off last Friday and spent this past week preparing for their Region 1-AAAA contest against Columbus High School (CHS). That preparation paid off as the Panthers were able to rout the Blue Devils 55-7 on Friday, October 11, at Alton Shell Stadium on Breast Cancer Awareness Night.

The ASHS players wore pink socks and the referees used pink penalty flags in commemoration of the night.

The Blue Devils won the toss, but elected to receive the ball to start the second half. That gave ASHS a chance to put points on the board early in the game, which they did.

Midway through the first quarter, the Panthers moved the ball down into CHS territory. A big play in that drive was a pass from ASHS quarterback Kanova Willoughby to his brother, Quevoluia Willoughby, for a big gain. A few plays later, Willoughby found his brother again, but this time, it was for a short touchdown reception. The point-after attempt failed, but the Panthers had a 6-0 lead. 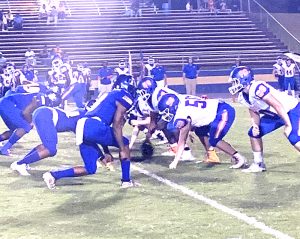 The Americus-Sumter defensive line (blue jerseys) is ready to make a stop on the Blue Devils.
Photo by Ken Gustafson

Later on in the quarter, the Panther defense came up with a big play. They were able to force a turnover on a fumble recovery, giving the Panther offense great field position. The ASHS offense took advantage of the good fortune by moving the ball down inside the CHS five-yard line. A few plays later, Kanova Willoughby scored on a quarterback keeper. The extra point by Alexis Vasquez was good, and the Panthers led 13-0 with 3:22 to go in the first quarter.

The Panther defense was able to stop the Blue Devils on their next possession, forcing them to punt the football to the ASHS offense. The Panthers took advantage once again as they moved the ball down inside the CHS 10-yard line. The Blue Devil defense was able to force the Panthers’ into a fourth-down situation, but Willoughby was able to get the necessary yardage to keep the drive alive. Then a couple of plays later, running back Christian Waymon scored from five-yards out. The extra point by Vasquez was good, giving the Panthers a commanding 20-0 lead with 7:37 left in the first half. 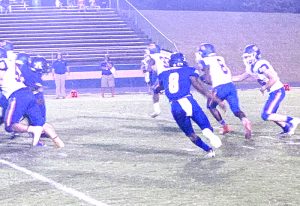 The Panther defense came up big once again when cornerback A.J. Stokes intercepted CHS quarterback Bryant Mansfield’s pass and ran the ball 43 yards the other way for another ASHS touchdown. The extra point by Vasquez was good, giving the Panthers a 27-0 lead.

The Panther defense stopped the Blue Devils again on offense and got the ball back. They cashed in once again by mounting a drive down to the CHS five-yard line. Keyvontay Nelson then scored a touchdown from five-yards out and Vasquez kicked the extra point to give ASHS a 34-0 lead.

However, the Panthers were still not done. The ASHS defense stopped the Blue Devils once again and forced a punt. Trevian Thomas returned the punt 72 yards for another Panther Touchdown. The extra point by Vasquez was good and the Panthers went into halftime with a comfortable 41-0 lead. 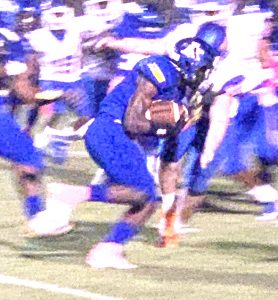 ASHS running back Christian Waymon with the ball. Waymon scored a touchdown in the win over Columbus.
Photo by Ken Gustafson

The Panthers picked up where they left off when Jawaski Whitehead recovered fumble and ran the ball 30 yards into CHS territory. A few plays later, Kanova Willoughby scored a touchdown on a quarterback keeper. The extra point by Vasquez was good, extending the Panthers’ lead to 48-0.

The Panthers added to their lead when defensive end P.J. Larry intercepted a pass and ran it back for a touchdown. The extra point by Vasquez was good and the ASHS lead was increased to 55-0. 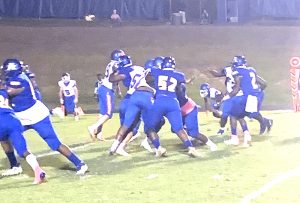 Americus-Sumter offensive lineman Aston Fletcher (52) blocks up front during one of the Panthers’ drives for a touchdown.
Photo by Ken Gustafson

The Panther defense wreaked havoc all night on the Blue Devils’ offense. They forced CHS into at least five turnovers on the night.

CHS running back Tre Peterson was able to score with about a minute left, but by then, the Panthers had taken care of business.

ASHS improves to 3-3 overall and 3-1 in the Region 1-AAAA standings. They will travel to Columbus next Thursday night, October 17, to take on Northside (Columbus) at Kinnett Stadium on the campus of Shaw High School. Kickoff is scheduled for 7 p.m.