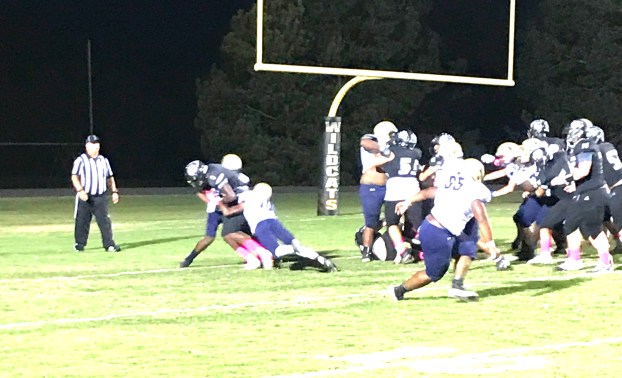 Schley County running back Zamon Ross fights his way towards the Wildcats' first touchdown of the game in their 49-14 win over Taylor County. Photo by Gabe Theiss

Wildcats continue to roll with region win over Taylor County

ELLAVILLE – The Schley County Wildcat football team (SCHS) ran their Region 4-A record to 3-0 with a hard-fought 49-14 win over Taylor County (TC) on Friday, October 11, at Schley County High School.

SCHS running back Zamon Ross got the Wildcats on the board with an eight-yard touchdown run. The extra point by Demarkis Clark was good and the Wildcats had a 7-0 lead with 4:17 left in the first quarter.

Running back Trent Bivins added to the Wildcats’ lead when he broke free and ran the ball 92 yards for a touchdown. The extra point by Aaron Pinckard was good to give SCHS a 14-0 lead with 9:14 left in the first half.

However, the Vikings had something to say. Running back Martavioun Little scored a touchdown from 24-yards out. The extra point by Jax Windham was good and the Vikings had cut the Wildcats’ lead to 14-7 with two minutes left before halftime.

The Wildcats fought right back as SCHS quarterback Garett Peavy threw a 26-yard touchdown pass to Landon Dailey with 28 seconds left before halftime. The point after by Pinckard was good, putting the Wildcats up 21-7 at halftime.

However, the Wildcats still weren’t done. Luke Renfroe scored on a 10-yard run. The extra point by Demarkis Clark was good and the Wildcats had a 42-7 lead with 9:01 left in the game.

TC was able to get another touchdown when quarterback Jabin Ford threw a 68-yard touchdown pass to Ladarious Johnson. The extra point by Windham was good to make the score 42-14 SCHS with 8:16 left.

However, the Wildcats were able to get one more touchdown to put the icing on the cake. Running back Jarrett Long scored on a six-yard run. The extra point by Pinckard was good and SCHS won by the score of 49-14.

On defense, the Wildcats were equally as impressive. Dailey led the team in tackles with five and Zykevious Walker had four tackles, including one tackle for a loss.

With the win, the Wildcats improve to 4-2 overall and 3-0 in the Region 4-A standings. They will travel to Montezuma, GA on Friday, October 18, to take on Macon County in another Region 4-A contest. Kickoff is scheduled for 7:30 p.m.

AMERICUS – The Americus-Sumter Panther football team (ASHS) made good use of a desperately needed night off last Friday and... read more