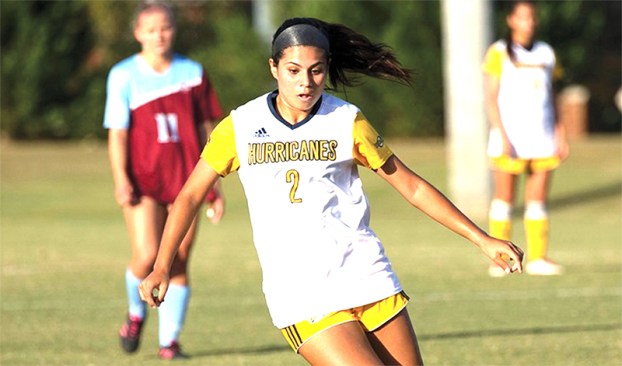 FLORENCE, SC – An early second-half goal proved to be the only difference in a Peach Belt Conference (PBC) match between the Lady Hurricanes of Georgia Southwestern State University and Francis Marion University (FMU). In the 54th minute, FMU’s Dayle McEwen found a loose ball inside the box and scored the only goal of the match to give the Patriots a 1-0 win on Saturday, October 12, at Hartzler Field on the FMU campus.

The Lady Hurricanes took only five shots, with three of them landing on goal. Alison Rugel led GSW with two shots, followed by Eduardo Giusti, Leila Hamed and Geraldine Alvarez.

In the 34th minute, Alvarez fired a 20-yard shot on goal, but FMU goalkeeper Micahla Kitchen was there for the save.

The Patriots were dominant in the run of play and it showed in the stat sheet as they out shot the Lady Hurricanes 14-5. GSW goalkeeper Hannah Morrone registered six saves in the match.

GSW will try to rebound with a win when they host Emmanuel College in a non-conference match on Wednesday, October 16, at 6 p.m.