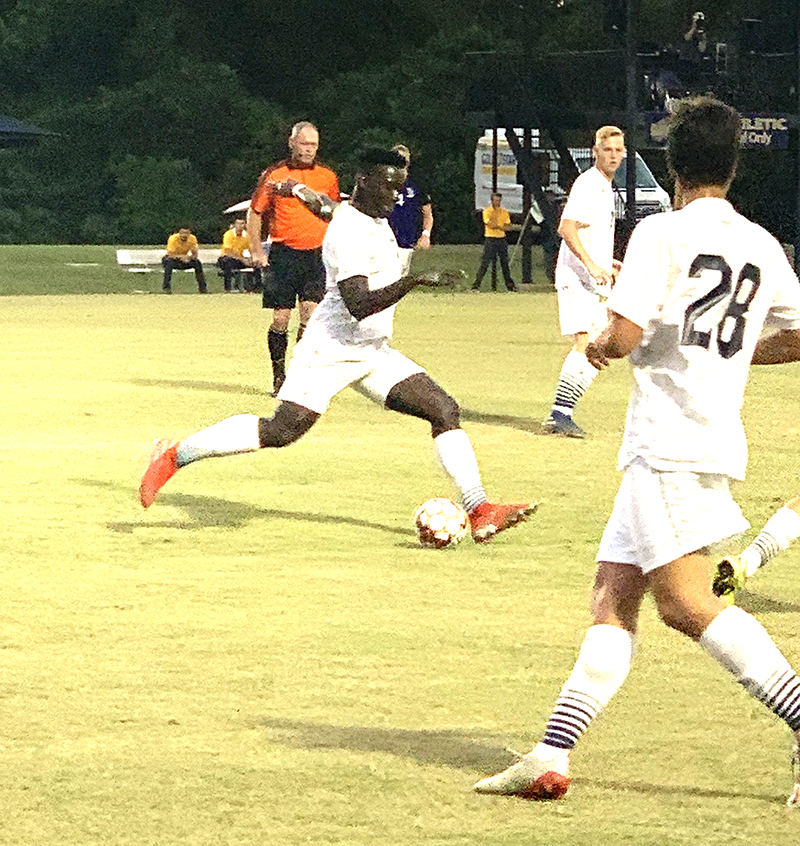 GSW junior center midfielder Raschaad Buchannan advances the ball up the field for the Hurricanes against YHC. Photo by Ken Gustafson

AMERICUS – The Georgia Southwestern State University men’s soccer team (GSW) tried to go tow-to-toe with the nationally ranked Mountain Lions of Young Harris College (YHC). However, the Hurricanes were dominated in this match by YHC from start to finish and lost 4-0 on Saturday, October 12, at Hurricane Field on the GSW campus.
With the loss, GSW drops to 3-6 overall and 0-2 in the Peach Belt Conference (PBC). YHC improves to 7-3 overall and 1-1 in the PBC.

After the game, GSW head coach Eric Crawford told the Americus Times-Recorder that his team needs to show a much higher work rate in match competition.

“We knew what we were up against when a ranked team is coming into town,” Crawford said. “We set up to kind of hit on the break and be a counter-attacking presence. We knew they were going to see a lot of the ball, but the big thing for us is we’ve got to bring a work rate to games. We know that if we don’t work, teams are going to come in and they’re going to have their way with us. The big thing for us is just work rate, work rate, work rate. We’ve got to go back to the drawing board and back at it this week.” 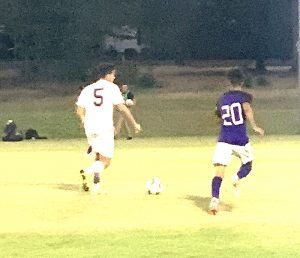 The Mountain Lions played a possession-oriented game, moving the ball from side to side across the field in a quick and efficient manner. The Hurricanes struggled to earn possession of the ball due to YHC’s precise passing. As a result, the Mountain Lions had numerous chances to score multiple goals in the first half. YHC came into this match ranked second in the NCAA Division II rankings in shots per game (18.56) and shots on goal (9.00). Those statistics manifested themselves in the first half, as the GSW back line was under siege for virtually the entire half. The Mountain Lions sent several crosses in front of goal, but their shots either went wide of the net or sailed over the cross bar. For the game, YHC had an overwhelming advantage over GSW in shots on goal (31-3).

In spite of the first-half offensive attack of the Mountain Lions, the Hurricanes managed to keep the score tied at 0-0 until the 20th minute. However, at that point, GSW was whistled for a foul just outside the 18-yard box and YHC was awarded a direct kick. Dani Fischer took the kick and it hit the near post as GSW goalkeeper Matthew sherry dove to try to save it. However, Fischer rebounded his own shot and put the ball in the back of the net to give YHC a 1-0 halftime lead. 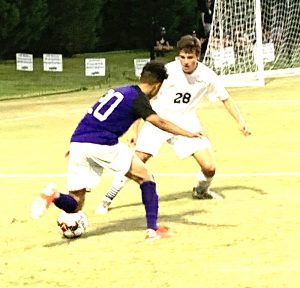 GSW freshman forward Sebastian Da Silva (28) is in a defensive position against a YHC forward.
Photo by Ken Gustafson

Three minutes into the second half, the Hurricanes found themselves down by two goals. GSW was whistled for a foul inside the 18-yard box and the Mountain Lions were awarded a penalty kick. Seba Andreassen stepped up and converted the penalty kick to give YHC a 2-0 lead. Later on in the 70th minute, Andreassen struck again for his second goal of the game. Then in the 88th minute, Sondre Olsen scored to complete the Mountain Lions’ 4-0 win over the Hurricanes.

Divin Moke led GSW with two shots and Matthew Sherry tallied three saves on the night for the Hurricanes.

GSW will try to rebound from this setback when they host Pensacola Christian College in a non-conference match on Thursday, October 17, at 7 p.m.