Jets and Lady Jets get experience during pre-season scrimmages 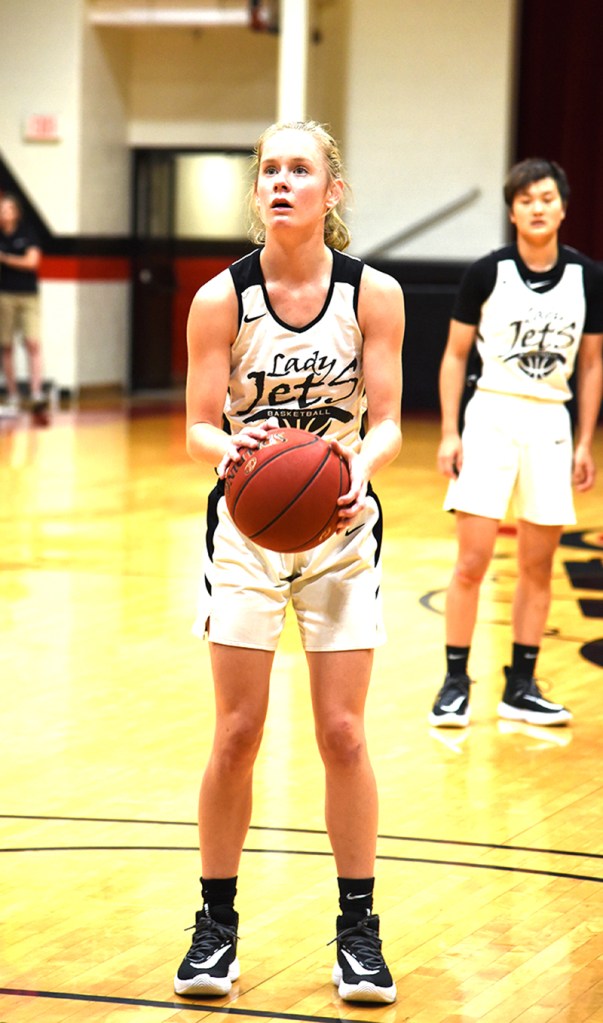 Anna McKendree, 14, returning sophomore guard from Flowery Branch, GA, did a good job of leading the Lady Jets in outside shooting against the Joint Base Landley-Eustis, VA team in a scrimmage recently. She is shown here at the free throw line. Photo by Su Ann Bird

AMERICUS – The South Georgia Technical College (SGTC) Jets and Lady Jets basketball teams took to the court recently to gain some valuable experience in pre-season jamborees and scrimmages to get themselves ready for the official start of their 2019-2020 regular seasons.

The Lady Jets hosted the Joint Base Langley-Eustis Lady Raptors from Virginia and played a six-period scrimmage that saw the 2019 Military Basketball Association (MBA) champions take a 75-70 win over SGTC at the end of the four-quarter regulation period.

The Joint Base Langley-Eustis women’s basketball team consists of women from the U.S. Air force, U.S. Army, U.S Navy and military dependents. They were coached by former SGTC Jets standout Darnell Hobson. Hobson was a member of the SGTC 2002-04 squad and played under former SGTC head coach Chris Wade. Hobson continued his education and athletic career at Edward Waters College in Jacksonville, FL. He came back for the SGTC Alumni sophomore celebration in 2019 and was selected to play for the black team during the alumni game, which featured nearly 30 former Jets and Lady Jets. 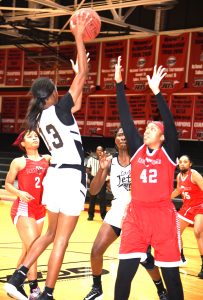 Yasriyyah Wazzeerud-Din, 13, a returning sophomore forward from Marietta, GA is shown above passing the ball inside in the scrimmage.
Photo by Su Ann Bird

The Lady Raptors defeated a semi-pro team in Las Vegas, NV in May 2019 to capture the MBA championship trophy. They compete against local colleges and universities tot rain for their bigger tournament games.

“This is a time for us to learn and work,” SGTC Lady Jets head coach James Frey said. “We did some things right and we saw some things that we still need to work on before the season starts.”

Frey was pleased with his squad’s three-point shooting. The Lady Jets shot over 40 percent from beyond the arc. However, Frey was not as pleased with the Lady Jets’ inside game. “Most of our big girls are freshmen and they have to adjust to college basketball. We need to do a better job of rebounding, blocking out and putting the ball back up. We have got to communicate better,” Frey said.

The Lady Jets will have the opportunity to work on those details this week before they host Thomas University in another scrimmage on Saturday, October 19, at the Hangar on the SGTC campus. 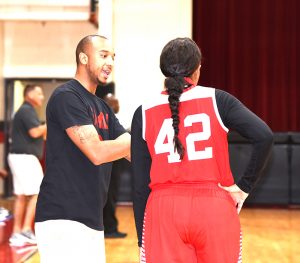 Former Jet standout Darnell Hobson, who was coaching against the Lady Jets, is shown above talking to one of his players from the Joint Base Landley-Eustis squad.
Photo by Su Ann Bird

As far as the SGTC men’s basketball team is concerned, head coach Travis Garrett was experimenting to see what his starting line-up will look like by playing a lot of guys during the pre-season scrimmages. On Saturday, October 12, the Jets traveled to Orlando, FL for the JUCO All-American Jamboree. On Wednesday, October 16, they will go to Cochran, GA to scrimmage Middle Georgia State College. Tip off for that game is scheduled for 6 p.m.

“Our first time out, I played everyone in all three games so I could evaluate them,” Garrett said. “I now have a better idea going forward as we continue to prepare for Cape Fear in our season opener on November 1. We play a very good Middle Georgia State team on Wednesday. They have a lot of upperclassmen so I am looking forward to seeing our guys compete and improve from this weekend.”

The Jets will also travel to Emerson, GA for the CB Hoops JUCO Jamboree on Saturday, October 19. They will then host Thomas University on Tuesday, October 22. That will conclude the preseason. It all begins for real when the Jets travel to Wilmington, NC on Friday, November 1, to open the 2019-2020 season in the Region 10/17 Tipoff at Cape Fear Community College.

The Lady Jets will also begin their season on Saturday, November 1. They will take on Santa Fe College in the first round of the Lady Jets Tip Off Classic. Tip off for that game will be at 7 p.m. at the Hangar.