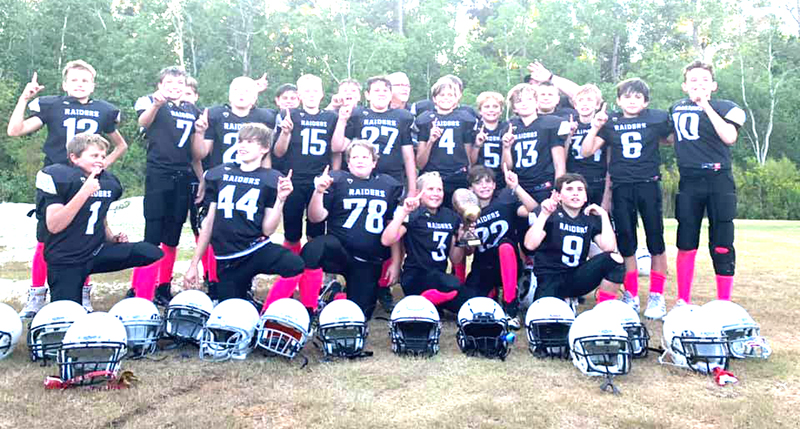 The Raiders finish the season with a record of 5-1.

The championship game was not decided until the final minute of play, but the Raiders were able to hang on and win.

SA began the game on defense, with the knights having the ball at their own 30-yard line. The Raider defense forced the DWS offense into a five-yard loss, forcing the Knights to punt.

The Raiders began their first possession of the game at their own 42-yard line. They used a strong ground game, featuring the running attack of Mac McMichael and Garrett Love. AS a result, SA was able to move the ball down to the DWS six-yard line. Then on fourth and one, the Raiders gave the ball to Cade Futch, who gained first-down yardage by diving to the DWS three-yard line. Then on first and goal from the three, Evan Fender ran around the right side for the game’s first touchdown. SA failed to convert the two-point attempt, but had an early 6-0 lead.

The SA offense got the ball back and went right to work. They continued to spread the ball around as Love, Fender, Futch, McMichael and Thomas Fowler all contributed to the SA ground game. Allen Styck caught a pass on the drive and Fender completed the drive by scoring his second touchdown. This time, Fender was able to complete the two-point conversion to give the Raiders a 14-0 lead.

On their next possession, the Knights decided to try to move the ball through the air. They scored their first touchdown with 14 seconds left, but failed to convert the two-point try. Nevertheless, the Raiders’ lead had been cut to 14-6 by halftime.

The Raiders began the second half on offense. However, they turned the ball over to the Knights on a fumble.

DWS took over at the SA 40-yard line with all of the momentum on their side. The Knights quickly picked up nine yards and looked like they were stealing momentum away from the Raiders. However, the Raider defense was able to force DWS into a fourth-down situation. On fourth and one from the SA 31, the Knights were unable to gain the necessary yardage and the ball went over on downs to the Raiders.

From that point on, the SA offensive line took the game over. Led by Futch, Brock Shrable, Jack Saye, Slade Griffin, Jameson Payne and Brooks Potter, the line was able to create holes for running backs Thomas Fowler and Evan Fender to run through and lead the Raider offense on a 57-yard drive to the DWS 12-yard line.

Then on first and 10 from the DWS 12, McMichael dropped back and threw a strike to wide receiver Bryant Roland for the Raiders’ third and final touchdown of the game, making the score 20-6 in favor of the Raiders.

The Knights were only able to gain two total yards on their next two offensive possessions. This was due to the stout defensive play of the Raiders. The SA defense was able to record four sacks on those two DWS drives. Brock Shrable, Cohen Rogers, Cade Futch, Allen Styck, Turner Simmons and Kinney Kennebrew all recorded sacks on the day for the Raiders.

The SA defense held the Knights to just 58 yards of total offense on the day. The SA defensive backfield had pass brake ups by Fender, McMichael and Peyton Gilbert.

“This team is amazing and they had great leadership,” SA head coach Mike McGlaun said. “Although we will be losing talented sixth graders, we have some very good players returning next year, like Jase Peterson, Noah Mixon, Peyton Sellers, Ben Haugabook, Dan Williams, Cade Ledger, Brooks Potter, Slade Griffin, Turner Simmons and Peyton Gilbert. Those young guys already scored against Tiftarea’s starting defense and against SGA (Southwest Georgia Academy). I am really proud of the sixth graders. I am also sad to see them moving on. I am excited about this group of fifth graders. I am interested to see what they can do.”