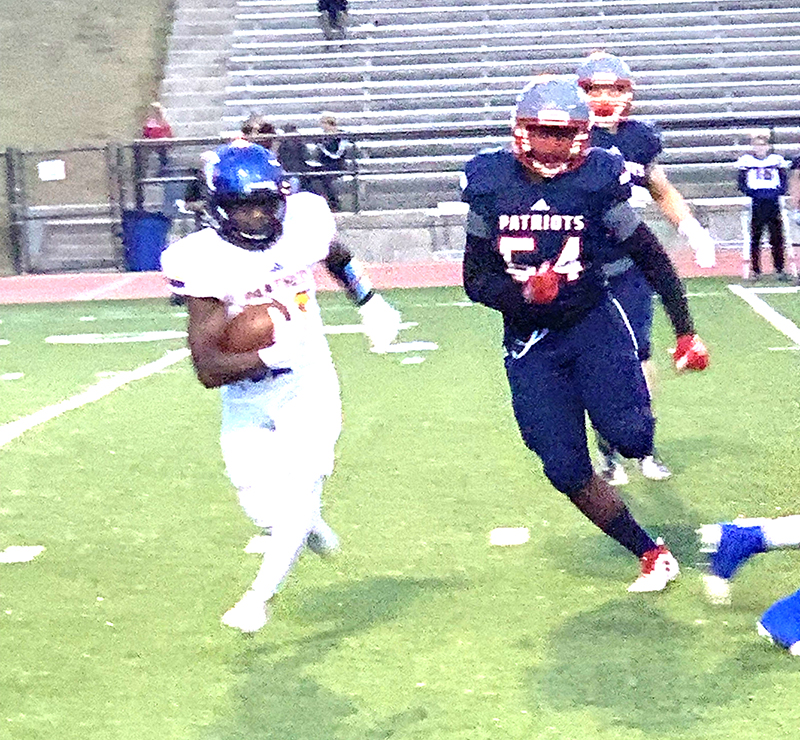 COLUMBUS, GA – The Americus-Sumter High School football team (ASHS) struggled in the first half against winless Northside High School (NHS), but took control of the game in the fourth quarter to secure a hard-fought 47-32 Region 1-AAAA victory over the Patriots in their Homecoming game on Thursday, October 17, at Kinnett Stadium in Columbus, GA.

With the win, the Panthers climb to 4-3 overall and 4-1 in the Region 1-AAAA standings. They are currently tied for second place with their next opponent, the Cairo Syrupmakers. NHS is still winless on the season at 0-8.

The Panthers were able to take control of the game in the fourth quarter by scoring three touchdowns, with one of them coming from their defense. 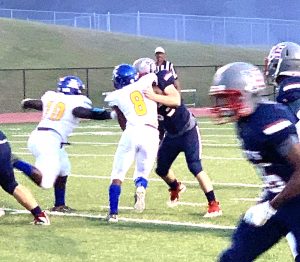 Outside linebacker Calvin Wright (8) and defensive lineman Tytravion Benn (70) both try to put pressure on the Northside offense.
Photo by Ken Gustafson

In the first quarter, ASHS struggled on offense, while the Patriots were able to score first. NHS quarterback Chandler Blanton was able to engineer a four-play, 58-yard drive to lead his team down inside the ASHS 10-yard line. Blanton capped the drive off with a touchdown pass to Jackson Nagy. The extra point attempt was good and the Patriots had an early 7-0 lead.

In the waning minutes of the first quarter, the Panther offense finally got going. Quarterback Kanova Willoughby was able to find Michael Johnson for a huge gain down inside NHS territory. Willoughby then threw a 20-yard touchdown pass to his brother, Quevoluia Willoughby. The point after attempt was by Alexis Vasquez was no good, but the Panthers were able to get on the board, trailing 7-6 with a little over a minute left in the quarter.

However, a few minutes into the second quarter, the Panthers were about to punt from their own end zone when a bad snap took place. The Panthers had to fall on the ball in the end zone, which resulted in a safety for the Patriots and a 9-6 lead for NHS.

The Patriots added to their lead later in the second quarter when Chipper Walker made a short field goal to give NHS a 12-6 lead. 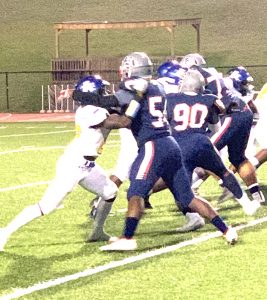 ASHS running back Christian Waymon is blocking an NHS defensive lineman during one of the Panthers’ offensive possessions.
Photo by Ken Gustafson

However, on the ensuing kickoff, Trevian Thomas was able to get ASHS back into the game. He ran the kick off back 88 yards for a Panther touchdown. The extra point by Alexis Vasquez was good and the Panthers had a 13-12 lead at that point.

ASHS had a chance to add to their lead in the waning minutes of the half when Vasquez attempted a 37-yard field goal, but the attempt was no good and score remained 13-12 in favor of the Panthers.

With less than a minute left in the half, the Panthers mounted another drive. They were able to move the ball down to the NHS eight-yard line. Then on second and goal, Willoughby scored a touchdown on a quarterback keeper from eight yards out. Vasquez’s extra point was good and the Panthers had a 20-12 lead at halftime.

ASHS won the toss before the game started, but elected to defer until the second half. However, on their first possession of the third quarter, ASHS fumbled the ball and Whitt Spurlock of NHS recovered it at the Panthers’ 45-yard line. Spurlock then ran the ball back the other way for a Patriot touchdown. The point after attempt was good and the ASHS lead was cut to 20-19 with less than 11 minutes left in the third quarter.

The Panthers fumbled the ball again on their next possession inside their own territory and Sheldon Brown of NHS recovered the ball. This would lead to a 13-yard touchdown pass from Blanton to Ellu Mcmoore to give the Patriots the lead. The point after attempt was good and all of a sudden, the Panthers found themselves down 26-20. 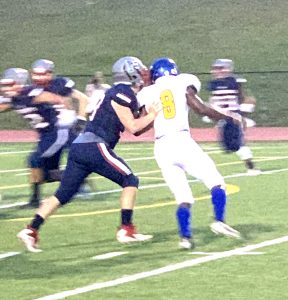 ASHS outside linebacker Calvin Wright is in the Patriots’ backfield trying to make a play.
Photo by Ken Gustafson

However, thanks to another long kick off return by Thomas, the Panthers started their next drive with great field possession. They were able to move the ball down inside the NHS 10-yard line. Then on second and goal from the five, running back P.J. Larry scored a rushing touchdown. However, Vasquez’s extra point attempt was blocked, making the score deadlocked at 26-26.

On their next possession, the Patriots responded by moving the ball down to the ASHS 13-yard line. The Panther defense was able to force NHS to attempt a short field goal. However, Walker’s field goal attempt was no good and the score remained tied at 26-26.

With less than three minutes left in the third quarter, ASHS punter P.J. Larry attempted a fake punt. Larry ran the ball for the necessary first-down yardage, but the Panthers were flagged for an illegal shift, forcing them to punt the ball away.

The Patriots threatened again with less than 10 minutes left in the game. Blanton threw a short pass to Joshua Bogan, who ran the ball all the way down to the ASHS 31-yard line. On third and 10 from the ASHS 30, Blanton tried the same play to Bogan, but ASHS defensive back A.J. Stokes was there to make the tackle for a two-yard loss. As a result, the Patriots were forced to attempt another long field goal. Walker’s attempt was no good and the Panthers had the ball on their own 20-yard line with 8:01 to go. 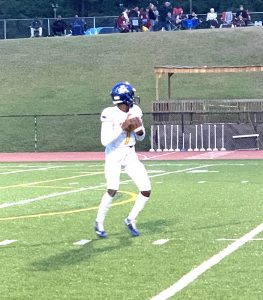 Americus-Sumter quarterback Kanova Willoughby is back to pass against Northside. Willoughby threw for one touchdown and ran for another to lead the Panthers to a 47-32 win over the Patriots.

ASHS took the game over midway through the fourth quarter. Kanova Willoughby was able to give his team the lead by scampering 52 yards for an ASHS touchdown. A few minutes later, the Panther defense was able to score a touchdown when Eric Aldridge recovered a fumble in the end zone. Not long after that, the Panthers put the icing on the cake when P.J. Larry intercepted Blanton’s pass and ran the ball down near the NHS 10-yard line. A couple of plays later, running back Keyvontay Nelson scored a rushing touchdown. The extra point was good and the Panthers led 47-26.

However, the Patriots weren’t done just yet. On third and 17 from the NHS 22, Blanton threw a short pass to Darryl Stannard, who ran the ball 78 yards for a Patriot touchdown. The extra point was no good, but NHS had suddenly cut the Panthers’ lead to 47-32 with 1:44 to play.

After a few running plays, the Panthers punted with less than 40 seconds left. However, the punt was blocked and the Patriots had the ball at the ASHS 21 yard line. The Panther defense was able to hold the Patriots from scoring and ASHS left Kinnett Stadium with a hard-fought 47-32 win.

Up next for the Panthers is a tough but important Region 1-AAAA home game against Cairo (5-2, 4-1) on Friday, October 25. Kickoff from Alton Shell Stadium is scheduled for 7:30 p.m.