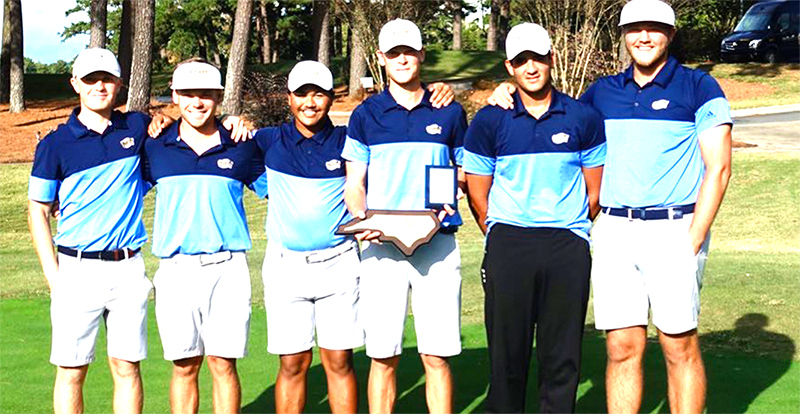 The No. 2-ranked Georgia Southwestern State University men’s golf team is seen here with their championship plaque after winning the Queens Invitational. Photo by Arthur Thompson

KANNAPOLIS, NC – The No. 2 ranked Georgia Southwestern State University men’s golf team won the Queens Invitational tournament as they carded a nine-under 275 during Round 3 of the tournament to move up the leaderboard into first place. The Hurricanes finished with a total score of 835 (-17). With scores of 279, 281 and 275, GSW broke the 18-hole, 36-hole and 54-hole program record at the Golf Club at Irish Creek in Kannapolis, NC.

The Queens Invitational was hosted by Queens College in Charlotte, NC.

GSW senior Vincent Norman shot a Round 3 score of 70 and finished with an eight-under 205, picking up his third individual tournament championship of the season. Cole Madison led Round 3 for the Hurricanes by carding a tournament-low score of 66. Madison finished tied for ninth place with a total score of 210 (-3). Saksit Jairak shot a 70 in the third round, followed by Chase McLain, who carded a 72. Simon Estrada shot a 69 in Round 3 and earned a total score of 215 (+2) to finish tied for 25th place. All five GSW golfers finished in the top 25.

Norman won the tiebreaker to edge out USC Aiken’s Leo Johansson, who finished with a total score of 205 (-8) for a second-place finish. Dan Bradbury and Erik Fogel of Lincoln Memorial University finished in third and fourth place respectively with scores of 207 (-6) and 208 (-5).

The Hurricanes closed out their fall 2019 season with two wins and two top-five finishes. They will return to the green in 2020 when they compete in the Newberry College Invitational Monday and Tuesday, February 17-18.