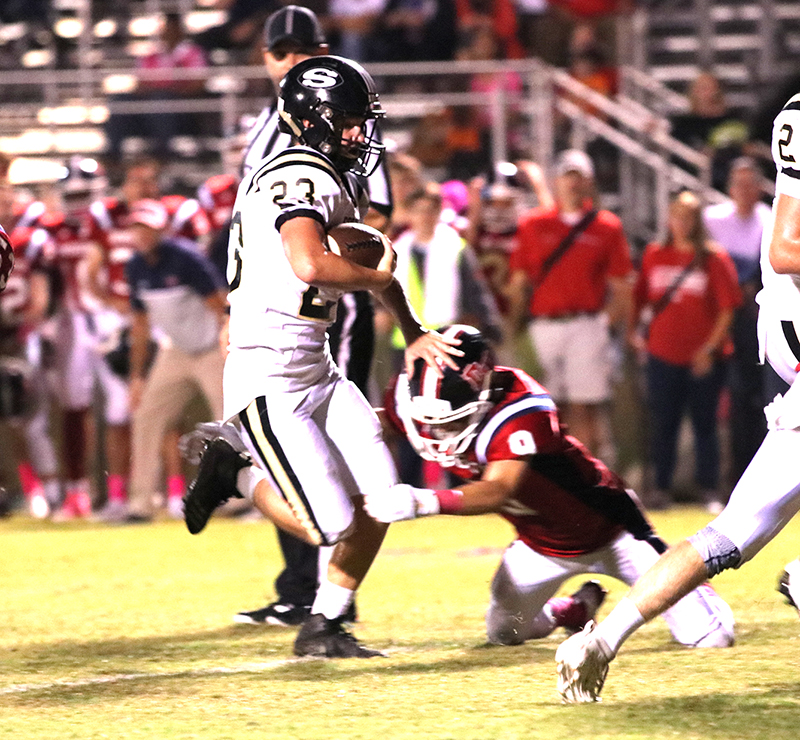 Southland Academy running back James Griffin rushed for 29 yards on five carries in the Raiders’ 10-0 loss at Deerfield-Windsor. Photo by Sherry Bass

ALBANY, GA – The Southland Academy Raider football team (SA) made the 40-mile drive down to Albany with the expectation of leaving with a win over their arch rivals Deerfield-Windsor (DWS). However, the Knights were able to stifle the normally potent Raider offense. As a result, DWS handed the Raiders a 10-0 shutout loss on Friday, October 25, at Webb Memorial Stadium.

With the loss, the Raiders fall to 4-4 overall and 1-2 in the GISA Region 3-AAA standings.

The normally strong SA running game was neutralized by the DWS defense. SA running back Clay Owens was held to just five yards on eight carries. James Griffin had the most success on the ground for the Raiders, but was only able to rush for 29 yards on five carries. 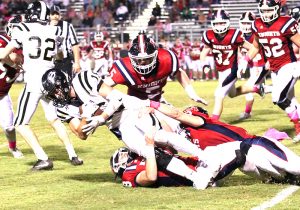 Southland quarterback Landon Law tries to fight for yardage on a running play against DWS.
Photo by Sherry Bass

SA quarterback Landon Law was held to 18 yards on 10 carries and Owen Exley had six yards on three carries. In total, the Raiders gained 66 yards on the ground on 29 carries.

The Knights, on the other hand, rushed for a total of 107 yards on 38 carries.

In the passing game, Law completed four passes for 44 yards and threw one interception. 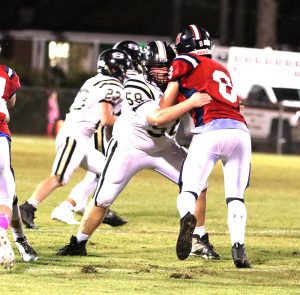 According to published reports, the Raiders were able to move the ball down to the DWS 12-yard line on the first drive of the game and had an opportunity to score. However, the DWS defense forced the Raiders into trying a field goal. Unfortunately for SA, the field goal attempt hit the upright and neither team could score until the second half.

According to published reports, DWS freshman quarterback Travis Ray threw a touchdown pass to Drew Reich to get the Knights on the board. Spears Wilson’s extra point attempt was good and the Knights had a 7-0 lead.

Later on in the fourth quarter, Wilson kicked a 21-yard field goal to complete the scoring for the Knights.

On a positive note for the Raiders, their defense played extremely well. Nathan Duke led the SA defense with nine tackles and Hunter McCain had eight.

The Raiders will try to rebound from this setback when they host Creekside Christian Academy on Friday, November 1, at 7:30 p.m.