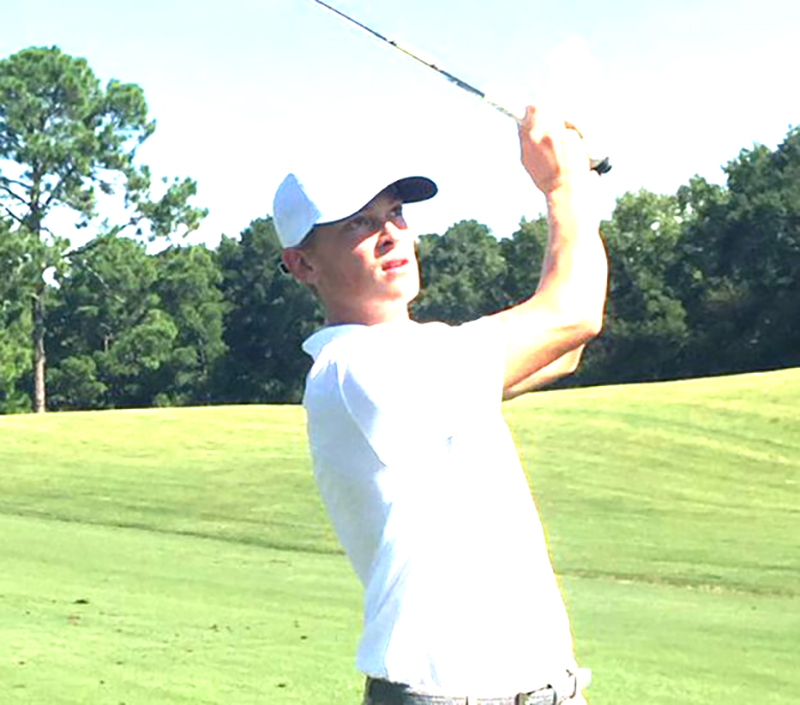 AMERICUS, GA – Georgia Southwestern State University senior golfer Vincent Norman and his teammates are experiencing unprecedented success as the GSW men’s golf team is currently ranked #1 in the nation in the NCAA Division II rankings, according to Golfstat.com.

The Hurricanes moved up from #2 to #1 after winning the Queens Invitational with a total score of 835 (17 under par). That tournament took place on Monday and Tuesday, October 21-22, in Kannapolis, NC. In that tournament, Norman shot a 70 in the final round for a total individual score of 205 (eight under par) to lead the Hurricanes to victory.

Like every other great athlete, Norman’s journey to this point in his athletic career has been a long one. Norman grew up in Stockholm, Sweden and is the son of Cleas and Eva Norman. His older sister, Vendela Norman, was a former swimmer at East Carolina University.

Growing up in Sweden, Norman didn’t start taking golf seriously until his teenage years. “I was quite late with that. I played a lot of hockey growing up and soccer for a bit,” Norman said. “I was into hockey until I was, like, 15 and then basically from age 13 or 14 maybe, I started playing golf for real. I hit balls on the range with my Dad since I was a little kid, like five, six or seven years old. Then going into high school, I had to make a choice between hockey and golf and I picked golf.”

Norman believes that he chose golf over hockey due to the environment that he grew up in back home and the golf club he grew up in. “There were a lot of good people just loving golf, I guess…just out playing for fun,” Norman said. This golf environment that Norman grew up in proved to be the catalyst that would lead him to choose golf over hockey. It would lead Norman to excel at the sport to the point to where he is now leading the number one-ranked Hurricanes to a possible national championship.

While he had some schools in Florida recruiting him, Norman found out about Georgia Southwestern State through a friend of his who played for current GSW head coach Darcy Donaldson at Concord University in Athens, WV, where Donaldson was serving as an assistant coach.

No doubt Norman has watched a lot of great players on the PGA Tour, but he credits much of his golf game and his pattern of play to two Swedish professional golfers: Alex Noren and Kristoffer Broberg. According to Wikipedia, Noren earned a spot on the European Tour in 2007 by finishing the previous year in third place in the Challenge Tour rankings. Noren would later make the cut at the 2008 Open Championship (2008 British Open) and finished in 19th place. Broberg won his first tournament on the European Tour at the 2015 BMW Masters. To win that tournament, he defeated 2018 Masters champion Patrick Reed in a sudden-death playoff. “Kristoffer was my mentor. He’s a really good friend of mine,” Norman said. “He’s always been kind of a big brother for me. He’s been so good. He’s taken me on his shoulder since I was 14 or 15. I learned from him and practiced with him every day.”

Upon graduation in the spring, Norman would like to try to qualify for the PGA Tour. “That’s what I’m going to do this offseason. I might give the PGA Tour a go. Otherwise, I might go back and play in some stuff leading up to the European Tour,” Norman said. Norman himself has already competed on the European Tour. This past August, Norman competed in the Scandinavian Invitation at the Hills Golf and Sports Club in Gothenburg, Sweden.

According to information on GSW’s athletic website, www.gswcanes.com, since he came to GSW in the fall of 2016, Norman has played nothing but outstanding golf for the Hurricanes. As a freshman during the 2016-17 season, Norman played in six tournaments and earned two top-10 finishes. His best outing that year was finishing in sixth place at the NCAA Division II South/Southeast Preview. During that tournament, Norman’s lowest score was a round of 71.

During his sophomore year, Norman steadily improved. He played in 10 tournaments and won the Hurricane Invitational with a total individual score of 134. His lowest round during that tournament was a 64. During the 2017-18 season, Norman was ranked third in the Peach Belt Conference (PBC) with a 71.55 stroke average. That same year, he was named to the NCAA Division II PING All-Southeast Team and was named an NCAA Division II PING All-American. Norman also garnered PBC First Team All-Conference honors.

This year, Norman has already gotten off to a torrid start. He has already won three out of four tournaments. He won this year’s Aflac/Cougar Invitational, which was played back in September. In that tournament, Norman shot rounds of 71, 67 and 68 for a total score of 206 (seven under par). He also won the Shark Invitational with a total score of 214 (12 under par) and most recently; he won the Queens Invitational Tournament with a total score of 205 (eight under par). Norman is currently shooting a 69.08 scoring average and has already been named the PBC Golfer of the Week three times this season. According to Norman, the best round of golf that he has shot since he stepped on the GSW campus four years ago came earlier this month at the GolfRank Invitational at the PGA National Champions Course in Palm Beach, FL. “The best one came last month at the PGA National course. It was a round of 64. It was a really tough course. That’s been the best one,” Norman said.

In May of 2020, Norman will graduate from GSW with a degree in Business Management. If a professional career in golf doesn’t work out, Norman would like to do something that involves sports, such as being in sports management.

Obviously, Norman has watched Tiger Woods and the rest of the world’s best golfers perform at the highest level. Of those great PGA golfers, Woods is indeed the one that Norman admires the most. “It’s probably Tiger. I mean, he’s done so much for the sport since watching him since I was a kid,” Norman said. “He’s probably the reason a lot of us play golf too. It’s got to be Tiger.”

Being that Norman has achieved so much success on the golf course during his time at GSW, he has certainly made many great golf shots. While it was tough for him to come up with one at first, one shot in particular sticks out in his mind. “That’s a tough one,” Norman said. “A good one that I had was this year when we played in a playoff. It was like a team playoff. I made a 20 footer for birdie to win it for us. That was maybe the best shot under that pressure and winning it for the team and not only for myself.” Norman went on to say that this shot took place at this year’s Aflac/Cougar Invitational played back in September.

In college golf, there are two seasons: a fall season and a spring season, which is the more important one. This year’s fall season ended with the Queens Invitational, which took place a week ago. Norman and the number one-ranked GSW Hurricanes will begin the spring season on Monday and Tuesday, February 17-18, at the Newberry Invitational. The tournament will be played at the Ocean Course at Kiawah Island, SC.

Though he originally is not from Americus, Vincent Norman can and should be considered a hometown hero to Americus and Sumter County. Not only is he a great golfer, he is a great man as well. It is too early to be talking about a national championship in golf for GSW right now. There is a lot of golf to be played. However, the Hurricanes have the talent to make that goal a reality. Norman is not only capable of leading GSW to a national title, but is also capable of earning himself a spot on the PGA Tour. Let’s hope that both of these things happen.