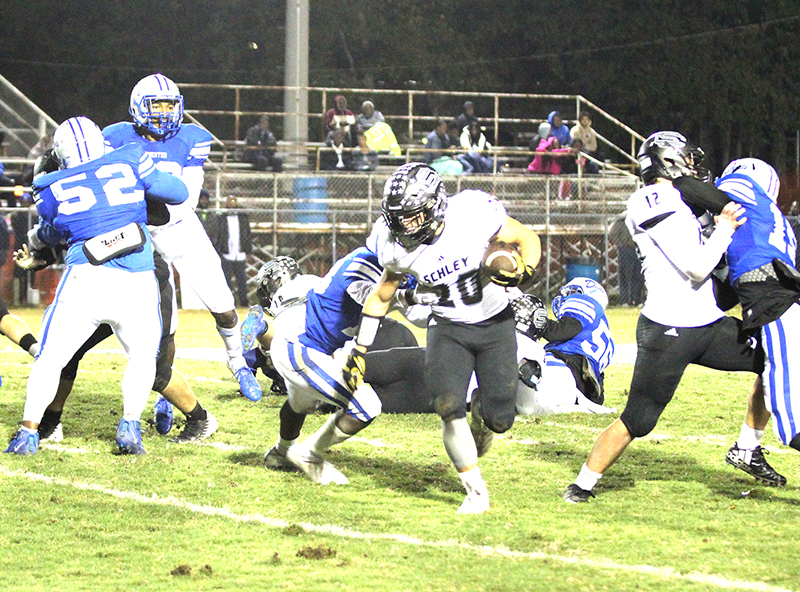 Schley County running back Trent Bivins (20) rushed for 120 yards on 11 carries and scored one rushing touchdown in the Wildcats 34-20 loss to Manchester. Photo by Sheila DeVane

MANCHESTER, GA – After the first quarter between Schley County (SCHS) and Manchester (MHS), the Wildcats only trailed the Blue Devils 8-0, but MHS scored 14 points in the second quarter to take a 22-6 halftime lead. It was a deficit that SCHS couldn’t overcome as they went on to lose to the Blue Devils 34-20 on Friday, November 1, at Manchester High School.

SCHS running back Trent Bivins produced a strong running game for the Wildcats. Bivins rushed for 120 yards on 11 carries and scored one rushing touchdown to lead the Wildcats’ offensive attack, but it was not enough.

MHS opened the scoring when quarterback Morgan Raymond threw a four-yard touchdown pass to Nick Foster. The Blue Devils decided to convert a two-point conversion and did so when Raymond found Foster again in the end zone to give MHS an 8-0 lead with 7:08 left in the first quarter. 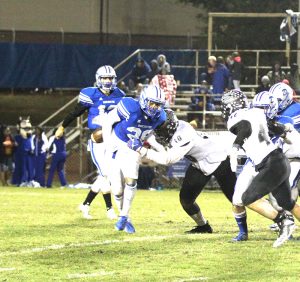 Schley County defensive end Zykevious Walker (10) knocks the ball out of an MHS running back’s hands. The ball is eventually recovered by Malachi Banks of SCHS.
Photo by Sheila DeVane

The Blue Devils added to their lead in the second quarter when Raymond threw a 44-yard touchdown pass to Foster. The two-point conversion attempt failed, but MHS had a 14-0 lead with 10:02 left in the first half.

The Wildcats responded a minute later when Bivins ran the ball 46 yards for a touchdown. SCHS tried a two-point conversion as quarterback Garrett Peavy tried to score on a quarterback keeper, but was unsuccessful. Nevertheless, SCHS had cut into the Blue Devils’ lead at 14-6 with 9:02 left before halftime.

However, MHS responded as running back Anthony Ferguson scored a rushing touchdown. The two-point conversion was good, giving the Blue Devils a 22-6 lead at the half.

The Wildcats were able to bring their deficit back to 10 points when Zykevious Walker scored from one-yard out. The two-point conversion attempt by Bivins failed, but SCHS was back within striking distance, trailing 22-12 with 9:35 left in the third quarter.

However, the Blue Devils responded again as Ferguson scored his second touchdown of the game on a 22-yard run. Foster tried to score on the two-point conversion attempt, but failed. Nevertheless, the Blue Devils had extended their lead back to 16 points at 28-12 with 5:05 left in the third quarter.

The Wildcats tried to keep themselves in the game, as Landon Dailey was able to score a rushing touchdown from five yards out. Peavy was able to convert the two-point attempt by completing a pass to Jarrett Long. With 2:01 remaining in the third quarter, the Wildcats were within just eight points, trailing 28-20.

However, the Blue Devils sealed their victory when Raymond threw a 35-yard touchdown pass to Foster. The two-point conversion attempt failed, but MHS had done enough to earn a 34-20 victory over the Wildcats.

In addition to the 120 rushing yards by Bivins, SC running back Zamon Ross rushed for 90 yards on 14 carries.

On the defensive side of the ball, Walker, who applies most of his trade at defensive end, tallied eight tackles and one sack on the evening. Bivins also tallied 11 tackles, including two tackles for a loss. Jarrett Long also had eight tackles in the game for the Wildcats.

In the passing game, Peavy went 3 for 13 for 21 yards and his longest completion was a pass caught by Ross for 15 yards.

The Wildcats will finish out the regular season when they host Brookstone (6-3, 4-1) on Friday, November 8. It will be Senior Night at SCHS and 14 seniors on the Wildcats’ roster will be recognized and honored for their efforts throughout their SCHS football careers.

As far as the state playoffs are concerned, the Wildcats will not know whether or not they have qualified until after Friday’s game.

Raiders bounce back with win over Cougars