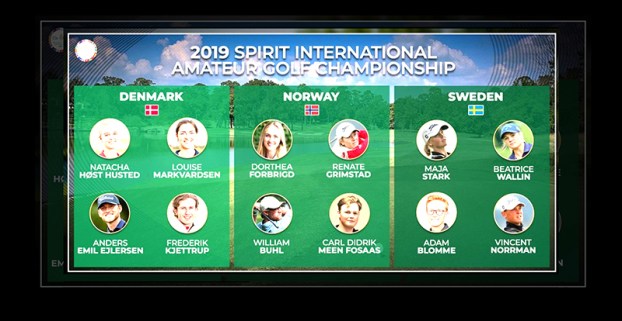 TRINITY, TX – Georgia Southwestern State University senior golfer Vincent Norrman has been selected to represent his home country of Sweden at the 2019 Spirit International Amateur Golf Championship. A total of 76 golfers from 19 countries and representing six continents will compete Thursday through Saturday, November 7-9, at the Whispering Pines Golf Club in Trinity, TX.

The Spirit International will pair two male and two female amateur golfers from each country to compete for a chance at gold. The biennial tournament is back for the first time since 2015, as the 2017 tournament was canceled due to Hurricane Harvey.

Norrman, who according to Golfstat.com is the top-ranked golfer in the NCAA Division II level, will be joining many golfers from NCAA Division I schools who are competing in the field. Some of the Division I schools that will have golfers competing in this tournament are No. 3 Georgia Tech, No. 4 Texas Tech and No. 7 Duke. Norrman won three of the four collegiate events he participated in this fall and he leads the Peach Belt Conference with a 69.08 scoring average.

The Spirit International is a celebration of goodwill through the game of golf. There is an opening and closing ceremony, in addition to festive dinner parties throughout the week of the tournament. Camp Olympia, one of the premiere summer camps in the country, provides international village accommodations for the golfers, allowing them to mix and socialize after play.

The 2019 Spirit International is a 54-hole four-ball stroke play competition. There are three concurrent competition categories: International Team, Men’s Team and Women’s Team. Gold, silver and bronze commemorative medals are awarded to the top finishers in each competition.