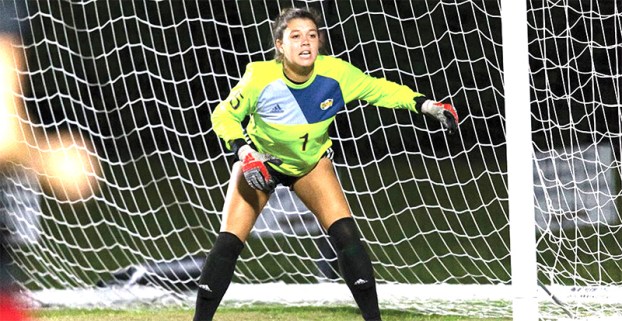 AMERICUS – The Georgia Southwestern State University women’s soccer team (GSW) was hoping to win their last home game of the season when they faced off with Columbus State University (CSU). However, the Lady Cougars took total control of the match early and dominated throughout on their way to a 4-0 win over GSW on Wednesday, November 6, at Hurricane Field.

Not only were the Lady Hurricanes held scoreless, they were not able to register even one shot during the first half. In contrast, the Lady Cougars tallied 14 first-half shots. For the match, the Lady Hurricanes were able to muster only two shots, while CSU had a total of 21. Nine of those 21 shots were on goal.

In the second half, freshman forward Payton Johnson let off a shot that landed to the right of the goal. The only other GSW shot during the match came off a header by sophomore forward Emily Collum that sailed too high. GSW sophomore goalkeeper Hannah Morrone finished the match with five saves.

The Lady Cougars’ first goal of the match came from Carley Canzoneri in the 35th minute. CSU got their second goal of the game in the 54th minute by Brenna Harrison. Brooke Ouimette then scored two more second-half goals to complete the scoring for CSU.

The Lady Hurricanes will close out the 2019 season on the road by traveling to Greenwood, SC to take on the Lady Bearcats of Lander University on Saturday, November 9. Kickoff is scheduled for 7 p.m.