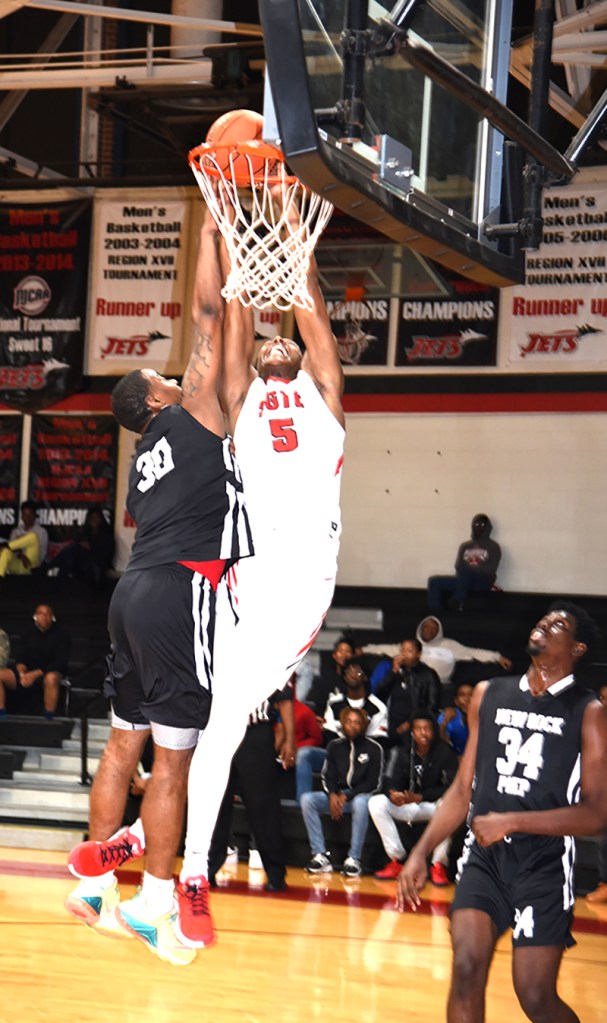 SGTC sophomore guard Justin Johnson (5) is shown going up for a dunk against New Rock Prep. He has been the leading scorer for the Jets in the first five games this season. Photo by Su Ann Bird

AMERICUS – The South Georgia Technical College (SGTC) men’s basketball team improved its record to 3-2 with a 102-77 win over New Rock Prep (NRP) in the Jets’ first home game of the 2019-20 season on Monday, November 11, at the Hanger.

“We have played some good teams and this is a chance to get the guys ready for the conference season,” SGTC head coach Travis Garrett said. “We have a lot of talent. We just have to get it all together.”

“Justin is playing well, but we know as the season progresses that our opponents are going to key on him and we have got to have some other players to step up and fill in that gap,” Garrett said.

Johnson was named the Georgia Collegiate Athletic Conference (GCAA) Division I Player of the Week for November 11. In both games of the Veterans Day Classic, Johnson averaged 26 points, eight rebounds, three assists, one block and 3.5 steals.

Samari Tyson of the Lady Jets was named the GCAA Division I women’s player of the week. Tyson averaged 17.5 points, 4.5 rebounds, five assists and three steals during the same week.

SGTC never trailed against NRP, though NRP did tie the contest a couple of times early in the first half. The Jets took control of the game in the first half and led at halftime 52-36. SGTC continued to dominate throughout the second half en route to the 102-77 win.

In addition to Johnson, other SGTC players scored in double figures. Lamont Sanders, Jairus Carroll and Tabais Long each scored 11 points. Brice Paster also chipped in 10 points in the winning cause.

SGTC will be hosting the Pete Arrington Classic this Friday and Saturday, November 15-16. The Jets will play Wake Technical College on Friday at 7:30 p.m., followed by a Saturday afternoon game against Triton College. Tip off for that game is scheduled for 3 p.m.

The Lady Jets will also be at home on Saturday, November 16. They will host Andrew College (AC) in a GCAA matchup at 5 p.m.

However, before their Saturday contest against AC, the Lady Jets will travel to Macon for a conference game at Central Georgia Technical College on Wednesday, November 13. Tip off is scheduled for 5:30 p.m.