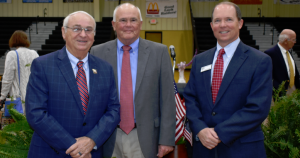 Southland Academy’s tribute to Veterans was an amazing and deeply moving program filled with many special touches.  From the tri-board displays by the fourth graders, handmade red poppy bookmarks by the preschool students, the sweet voices of the Lower School students as they sang special tributes contributed to a truly heartfelt, patriotic celebration of the honored guests, the veterans and their families.  The POW~MIA table and presentation of their flag along with the posting of each of the military flags, the letters written by students, the special music by the band and the hymns that were played, the eloquent student speeches, the playing of Taps by Veteran, Mike Saliba, and the recognition of all Veterans as they stood when the song representing each branch of service was played captured the attention and emotions of everyone present.

With earnest regard to God and country, Mr. Dale Davis, Air Force Veteran and grandfather to Sarah Davis (4thgrade) and Carli Davis (1st grade) offered the closing prayer.  With high esteem and respect, Southland was pleased to have Air Force Veteran Bill McGowan as the keynote speaker.  Mr. McGowan delivered an inspiring message not only to the veterans but to the students as well.  While reminiscent of his own military experiences, he praised all veterans for their service and commitment.  Mr. McGowan proudly credited several Americus citizens such as coaches and teachers for helping to prepare him physically and emotionally for the military.  Emphasizing selflessness and true heroism, Mr. McGowan admirably spoke of local Medal of Honor Recipient:  Korean War, Luther H. Story, United States Army.   Southland Academy is most humbled to pay tribute to America’s heroes, our veterans of the United States of America.