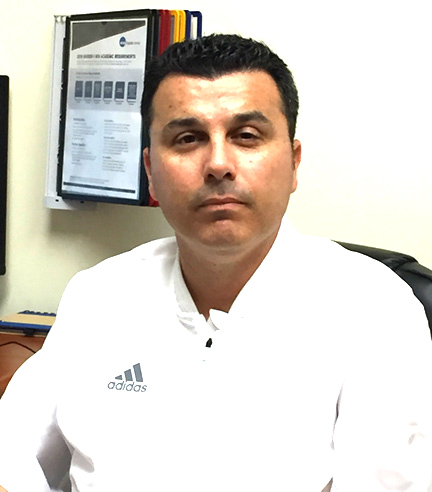 GSW women’s soccer coach Enrique Rodriguez has decided to step down after three seasons. He plans to pursue other professional opportunities, while spending more time with his family. ATR Archive

AMERICUS – Georgia Southwestern State University Director of Athletics Mike Leeder announced on Wednesday, November 13, that GSW Women’s head soccer coach Enrique Rodriguez has decided to step down from that position after three seasons due to personal reasons. Rodriguez plans to pursue other professional opportunities, while spending more time with his family.

“I’m grateful to GSW for the opportunity to lead the women’s soccer program these past seasons,” Rodriguez said. “I want to thank the support staff and, most importantly, the student-athletes I’ve had the privilege to meet and work alongside. My family will be reunited again and that is a priority now for me.”

Rodriguez was introduced as the Lady Hurricanes’ head coach in March 2017. A national search for his successor begins immediately.

“We wish Enrique and his family nothing but the best moving forward,” Leeder said. “I appreciate his commitment and the effort put forth towards meeting the vision of our department when it comes to involvement in campus activities, student-athlete success in the classroom and the program’s dedication to community service, while continuing to build competitiveness on the field.”