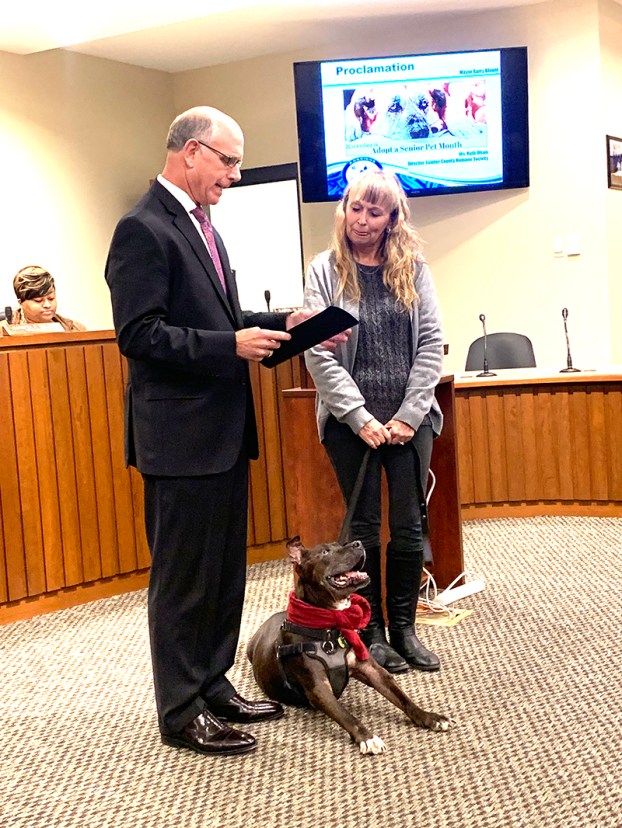 Mayor Blount presented Olson with a special proclamation plaque proclaiming November as National Adopt a Senior Pet Month and honoring the Sumter County Humane Society for its work throughout county in providing shelter to numerous dogs and cats. Olson brought with her a pit mix named Charlie up to the front of the chamber as she was being presented with the proclamation plaque.

Mayor Blount also presented Ms. Fanesha Holmes with a proclamation. Holmes was invited by Councilwoman Juanita Wilson to be the Honorary Council Member for November. 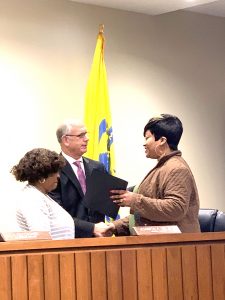 Mayor Blount presents Ms. Fanesha Holmes with a proclamation as the Honorary Council Member for November. Holmes was invited by Councilwoman Juanita Wilson to be this month’s honorary council member.
Photo by Ken Gustafson

The council also heard from Lori Gadson, Executive Director of New Horizons Habitat for Humanity (HFH). Gadson gave an update on what the organization does and the amount of homes that it has provided for people in Americus and throughout Sumter County. “We’ve been in this community for 20 years and it disheartens me that a lot of people still don’t know who we are and what it is that we do,” Gadson said. “As we are approaching 2020, I wanted to reinvent through a renaissance, our affiliate, New Horizons.” Gadson went on to do a power point presentation, showing the various HFH homes across the country. She explained that each home typically has a floor plan between 1,000 square feet and 1,500 square feet. “It’s really based on the needs of the family,” Gadson said. “Our community right here in Americus-Sumter County, they need us.” Gadson then showed a video slide of an orientation that over 100 families in Americus and throughout Sumter County attended because they were interested in housing. “Really quickly, I wanted to dispel a lot of myths and misconceptions about what it is that we do,” Gadson said. “The biggest one, I think, that we first need to talk about is that you never own your home or your land. That could not be further from the truth,” she said. Gadson went on to explain that once a person purchases an HFH home, that person owns the land that it comes on. “Another big misconception is that you do not have to pay for a Habitat home,” Gadson said. “If you don’t pay, you can’t stay.” She went on to explain that if all else fails, HFH does go beyond the call of duty, but sometimes foreclosure is necessary. 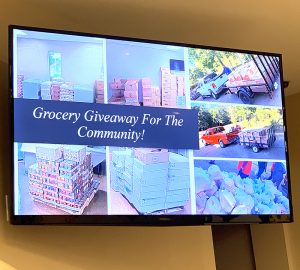 Rev. Courtney Moore, senior pastor of Kingdom Church in Americus, presents a power point presentation to the city council describing the various ministries that his church is involved in throughout Sumter County. One of those ministries is a grocery giveaway for people in the community who are in need.
Photo by Ken Gustafson

The ACS also got to here from Rev. Courtney Moore, Senior Pastor of the Kingdom Church in Americus. Rev. Moore explained to the ACS via a power point presentation the various ministries and charitable works that the church is involved in throughout Americus and Sumter County. The purpose for Rev. Moore’s presentation was to bring awareness to what is happening in the community. “We are in this community because we care,” Rev. Moore said. “We have a mandate. We have an assignment and we want to partner with the city to show how much we care and the city cares. We are hands on in the community.” Rev. Moore showed a clip of his church and its outreach being highlighted on TV newscasts such as WALB and a station out of Macon. “It’s not just me who is doing this. It’s the ministry of Kingdom Church who is making this happen,” Rev. Moore said. Moore went on to say that he is somewhat disappointed because he wants help from the city to do some of the things that are needed in the community and he doesn’t feel that he’s getting enough help from the city. “If Macon can pick us up, I should hear something from Americus,” Moore said.

Once Rev. Moore was done with his presentation, Councilman Nelson Brown stated that when a person comes to speak to the ACS and the city leaders, the city needs to reply and respond to that individual so that he or she doesn’t come and speak without hearing anything back from the city. Brown stated that City Manager Charles L. Coney, who was not present at the meeting, needs to give a response to Rev. Moore’s request for more assistance.

In other items, the ACS approved an alcohol license application for the sale of liquor, beer and wine to Maruti Package Store, located at 1602 Forsyth Street. Councilman Daryl Dowdell made a motion for approval and Councilman Brown seconded the motion. The ACS voted unanimously to approve the alcohol license.

The ACS approved an ordinance amendment based on the opinion offered by Municipal Court Judge M. Michael Greene concerning the “Drinking at Sidewalk Tables” Ordinance. The council said it would like to suspend the rules and take action this month. Councilman Brown made a motion to approve the amendment and Councilman Kelvin Pless seconded the motion. The ACS voted and the amendment passed unanimously.