Panthers get overwhelmed by Sandy Creek in state playoffs 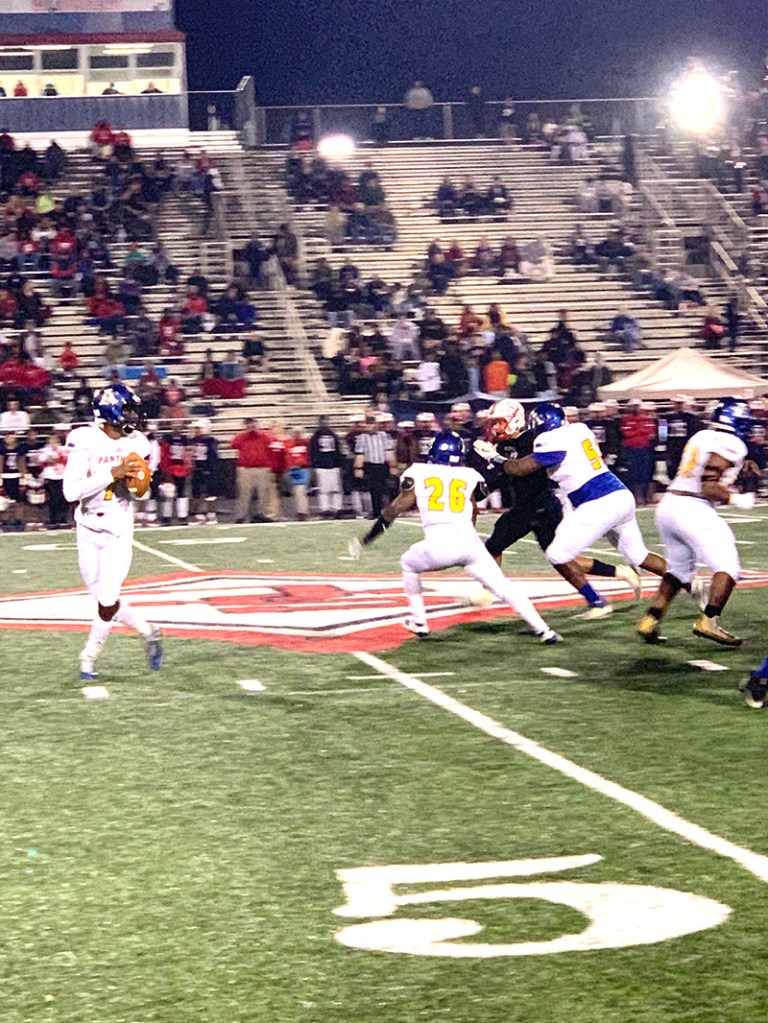 ASHS quarterback Kanova Willoughby is back to pass against Sandy Creek. Willoughby threw one touchdown pass and three interceptions on the night. Photo by Ken Gustafson

TYRONE, GA – The Americus-Sumter High School football team (ASHS) came into Tyrone, GA just south of Atlanta hoping to topple one of the best teams in state in the GHSA AAAA classification: the Patriots of Sand Creek. However, the Patriots scored 28 unanswered points in the first half on their way to a 56-7 victory over the Panthers in the second round of the GHSA Class AAAA State Playoffs on Friday, November 22, at Sandy Creek High School (SCHS).

ASHS finishes their season at 6-6 and SCHS improves to 11-1. They will host Madison County next Friday night in the state quarterfinals. 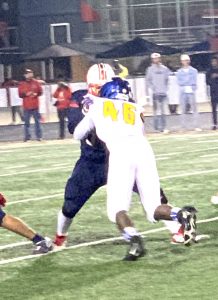 SCHS wide receiver/cornerback Brian Branch had a career day for the Patriots. He caught three touchdown receptions and intercepted ASHS quarterback Kanova Willoughby three times. On Willoughby’s third interception, Branch ran the ball back for a touchdown. With that interception, Branch also broke the SCHS school record for career interceptions (15). For the game, the Panthers committed four turnovers.

The Panthers got off to a great start when Willoughby threw a 63-yard touchdown pass to Michael Johnson in the first quarter. The extra point by Alexis Vasquez was good and ASHS had an early 7-0 lead.

However, from that point on, it was all SCHS. The Patriots showed why they came into this game with a record of 10-1. Later on in the first quarter, SCHS quarterback Matthew Williams threw a touchdown pass to Branch. The extra point by David Gonzalez was good and the game was tied at 7-7. 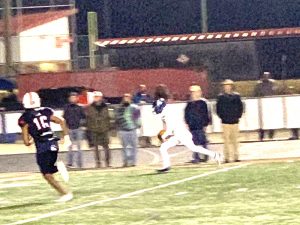 In the second quarter, the Patriots began to assert themselves on both sides of the ball. They began to move the ball on offense by mainly executing passing plays. They would take the lead with 5:49 left in the first half when running back Rashad Amos scored a rushing touchdown. The extra point by Gonzalez was good and the Patriots had a 14-7 lead.

During the remainder of the first half, the Panthers tried to move the ball on offense, but they were unable to mount a serious drive against the stout defense of the Patriots. The Panther defense continued to struggle against the SCHS offense, which was growing in confidence and making plays. SCHS added to their lead when Williams found Branch for his second touchdown reception of the night. The extra point by Gonzalez was good and SCHS had expanded its lead to 21-7.

Just before the half ended, the Patriots added to their lead when Williams found Branch for his third touchdown of the night. The extra point by Gonzalez was good and ASHS went into halftime trailing 28-7. 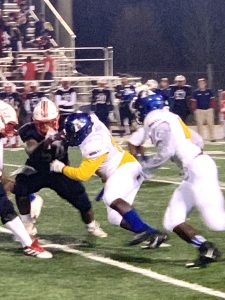 Tytavion Benn (70) and Michael Holt (46) both try to fight their way into the Sandy Creek backfield.
Photo by Ken Gustafson

Things went from bad to worse for the Panthers to start the second half. Being that SCHS had won the coin toss and elected to defer until the second half, they would get the football to start the third quarter. Williams went to work right away by throwing a 65-yard touchdown pass to Ahmad Jackson. The extra point was good and SCHS led 35-7.

On the Panthers’ ensuing possession, Willoughby’s pass was intercepted by Branch and run back for a touchdown. With that interception, Branch broke the SCHS school record for career interceptions (15).

The Patriots added to their lead when Williams found Jackson again in the end zone for his second touchdown reception of the night to increase the SCHS lead to 49-7. 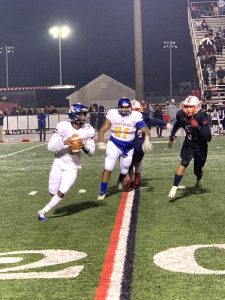 The SCHS defense continued to cause problems for the Panther offense in the second half by forcing several three-and outs. They also continued to harass Willoughby and sacked him at least three times in the game.

Late in the third quarter, ASHS head coach Ross Couch decided to bring in backup quarterback Cameron Evans to give him some experience. Unfortunately, the Patriot defense continued to force turnovers. As he was about to be sacked, Evans threw a desperation pass that was intercepted by Kylan Wimbish.

Early in the fourth quarter, the Patriots once again were able to move the ball down inside the ASHS 20-yard line. Then on second down and two from the ASHS five-yard line, running back Dorian Graham scored a rushing touchdown to complete the scoring for SCHS.