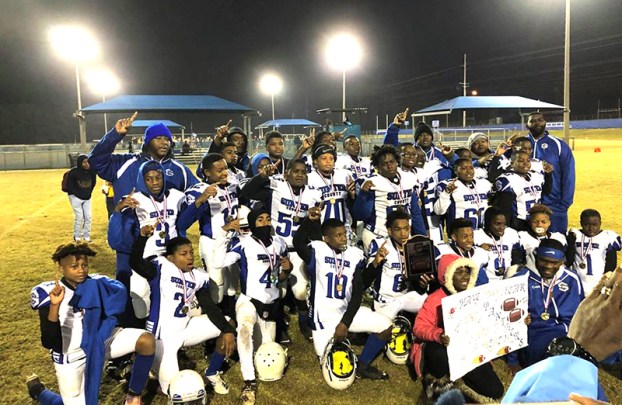 The Sumter County 12u All-Star football team poses for a team picture with their championship trophy after defeating Crisp County 20-6 to win the GRPA District 3 12u Championship. Photo by Tim Estes

The 12u team, coached by Brandon Gooden, defeated the 12u Crisp County All-Stars 20-6 to win the District 3 Championship at the 12u level. “The team played hard and had to overcome a lot of adversity,” Gooden said. “All runners ran very hard and the defense was flying to the ball. I was very pleased from both sides of the ball performance.”

A.J. Kearse and Torey Smith each scored offensive touchdowns for the 12u All-Stars. They also were able to force a turnover as Jaylen Brown recovered a fumble. That fumble recovery resulted in a touchdown that sealed the game for Sumter County.

“I’m proud of the guys and the coaches,” Gooden said. “They really have worked very hard to get this win and are ready to move on to the state tournament.” 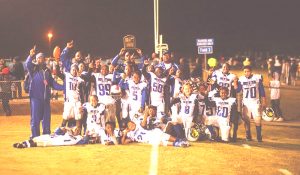 The Sumter County 10u All-Star football team poses for a team picture with their championship trophy after defeating Crisp County 25-0 to win the GRPA 10u District 3 Championship.
Photo by Tim Estes

The SCPRD 10u team, coached by Mark Arnett, won their district championship by beating the Crisp County 10u All-Stars 25-0. “We came out slow, but in the second half of the game, we really dominated the game the way we should have,” Arnett said. “We’ve worked hard to get better every day at practice and that showed last night on the field.”

Wildcats on the wrong side of repeated history