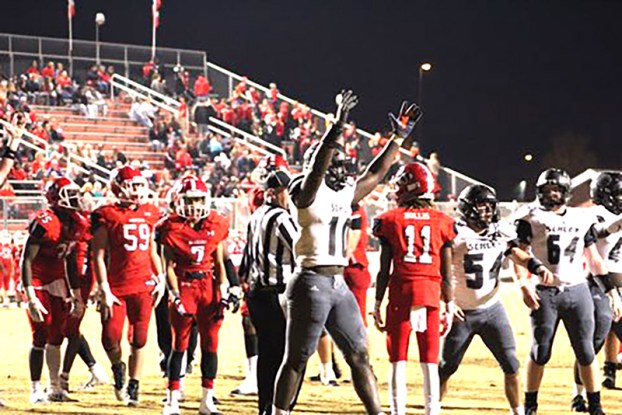 Schley County defensive end Zykevious Walker, who was also used as a running back, celebrates after scoring one of his two touchdowns in the Wildcats’ playoff loss to Marion County. Photo by Sheila DeVane

Wildcats on the wrong side of repeated history

A year ago at this time, the Wildcats fell to Marion County 34-27 in the state playoffs.

For 13 seniors, it was the last game they would play in a Schley County uniform. Some of them, most notably defensive end Zykevious Walker, will make their decisions shortly as to where they will play college football.

With the loss, the Wildcats end another successful season with a record of 7-5. 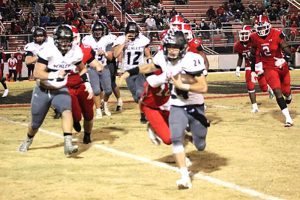 Schley County running back Landon Dailey (24) rushed for 73 yards on 14 carries and scored a touchdown in the Wildcats’ loss to Marion County.
Photo by Sheila DeVane

The Wildcats got off to a dream start in the first half by taking a 13-0 lead. With 5:24 left in the first quarter, senior running back Trent Bivins broke through the MCHS defensive line and scampered 60 yards for a touchdown. Aaron Pinckard’s extra point was good, giving the Wildcats a 7-0 lead.

SCHS then added to their lead with 6:03 left in the first half. The Wildcats moved the ball all the way down to the Eagles’ nine-yard line before Walker scored a rushing touchdown from nine yards out. The extra point by Pinckard was no good, but the Wildcats had a two-touchdown lead against their nemesis in the state playoffs. 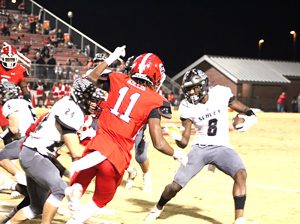 Schley County running back Zamon Ross tries to get past the MC defense. Ross rushed for 64 yards on 10 carries against Marion County.
Photo by Sheila DeVane

However, as one would expect, the Eagles (9-2) were not going to go quietly. With 2:42 to go before halftime, MCHS made a huge play on special teams. They blocked an SCHS punt and the ball was recovered by Roderick Dixon, who subsequently scored a touchdown on the play. The extra point was good and the Eagles were right back in the game, trailing 13-7.

MCHS got the ball back with time running out in the first half, but they were able to get a game-tying touchdown when Brandon Thomas caught an eight-yard touchdown pass from quarterback Trice McCannon. The extra point by Jabin Vicente was good and the Eagles had a 14-13 halftime lead.

Then with 3:30 to go in the third quarter, MCHS struck again when McCannon scored a rushing touchdown from three yards out. The extra point by Vicente was good, giving the Eagles a 21-13 lead. 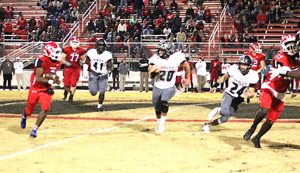 Schley County running back Trent Bivinbs rushed for 92 yards on nine carries and scored a touchdown in the loss to Marion County.
Photo by Sheila DeVane

However, the Wildcats battled back to tie the game with nine seconds left in the third quarter. Running back Landon Dailey was able to score a rushing touchdown from 11 yards out. Being that they had missed an extra point earlier, the Wildcats decided to go for two points. Quarterback Garrett Peavy through a short pass to Bivins to complete the two-point try, tying the game at 21-21 to start the fourth quarter.

However, the Eagles’ offense mounted another drive that resulted in points. With 9:38 to go, McCannon threw a 46-yard touchdown pass to Markevious Kelley. The extra point was no good, but MCHS was back on top 27-21.

However, the Wildcats fought back to tie the game with 3:07 left. They were able to move the ball down to the MCHS three-yard line before Walker scored his second rushing touchdown of the game. Unfortunately, Pinckard’s extra point was no good and the game remained tied 27-27.

In the waning minutes of the game, the Eagles were able to move the ball down to the SCHS two-yard line. Then with 45 seconds left, Thomas scored the winning touchdown from two yards out. McCannon was able to complete the two-point conversion, giving the Eagles a 35-27 victory over the Wildcats.

Bivins rushed for 92 yards on nine carries and scored a rushing touchdown.

In the passing game, Garrett Peavy completed four of seven passes for 22 yards and one interception.

Now that the season is over, many of the Wildcat seniors, along with other players, will transition to basketball, wrestling, baseball and track. For those Wildcat football underclassmen, they will start their work in the spring and all through next summer to get ready for another exciting and successful season of Schley County high school football.

AMERICUS, GA – It was an extremely emotional and memorable Monday night in the GSW Storm Dome as Georgia Southwestern... read more