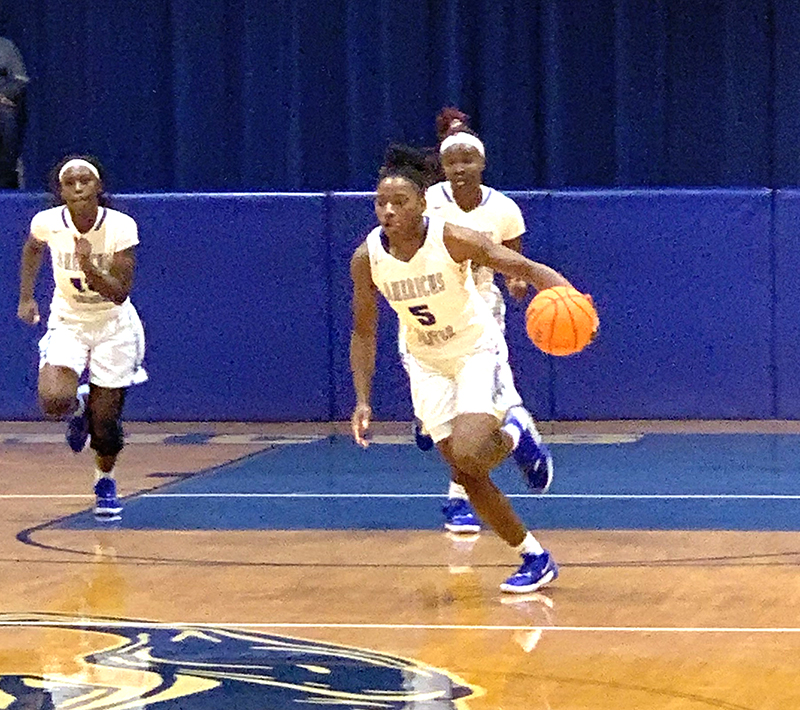 Americus-Sumter guard Jelissa Reese (5) scored 31 points to lead the Lady Panthers to a 65-41 victory over Lee County in the second meeting between the two teams. Photo by Ken Gustafson

On Saturday, November 23, the Lady Panthers defeated LCHS 56-33 in Leesburg.

While ASHS head coach Sherry Harris was pleased with the result, she was very concerned about the numerous turnovers her squad committed in the second half.

“Anytime you have more turnovers than you do field goals, it’s always a reason to worry,” Harris said. “We’ve just got to fine tune some things. We just played this same team a week ago. It’s a rivalry thing. There’s smack talk on social media. I’ve got to tell my girls to keep their heads, close out and put games away.”

With the win, the Lady Panthers remain undefeated at 5-0 and are 1-0 in Region 1-AAAA play.

In addition to Reese’s 31 points, Brianna Pope scored nine points and Trinity Jackson chipped in eight in the winning cause. 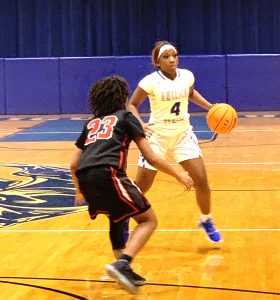 The Lady Panthers jumped out to a 9-4 lead in the first quarter and used their full-court pressure defense to create turnovers. The Lady Trojans (2-3) were able to break the ASHS press occasionally and scored some points, but ASHS was still able to maintain the lead. ASHS jumped out to a 15-9 lead on a fade-away jumper by Reese. The Lady Panthers closed out the first quarter on a 6-2 run to take a 21-11 lead.

However, LCHS cut their deficit to six at 23-17 as a result of two three-pointers by Monique Judge and Kennedy Snead. The Lady Panthers got a steal and a basket by Reese to push their lead back up to nine at 26-17 with just under four minutes left in the first half. Reese followed that up with another jumper to increase the lead to 11. With 2:45 to go in the half, a technical foul was called against ASHS and Judge made one of the technical foul shots. The Lady Trojans cut the ASHS lead to seven before ASHS guard Tiffani Goodman nailed a jumper from the top of the key. That began a run by the Lady Panthers, which would increase their lead to 37-24 at halftime.

Reese scored 15 of her game-high 31 points in the first half.

With about six minutes to go in the third quarter, the Lady Panthers jumped out to a 16-point lead on a three-pointer by Reese. However, near the end of the quarter, ASHS struggled with turnovers as LCHS tried to ratchet up their defensive pressure. As a result, the Lady Trojans were able to stay in the game and were aided by a three-pointer and a jumper from Judge. By the end of the third quarter, ASHS had a 50-35 lead, but were struggling with turnovers.

During the first three minutes of the fourth quarter, the Lady Panthers were going through a scoring drought. This was a great opportunity for LCHS to cut into the lead and make a move, but the Lady Trojans were struggling to make shots themselves and were unable to take advantage. ASHS finally broke their scoring drought with less then five minutes left when Reese hit a jumper to increase the lead to 52-38. That was the beginning of a 6-0 run by the Lady Panthers, which was capped off with a basket by Pope. Then with 3:16 to go in the game, Reese sank one of two free throws and then made a layup off of a steal to give ASHS a 59-38 lead. 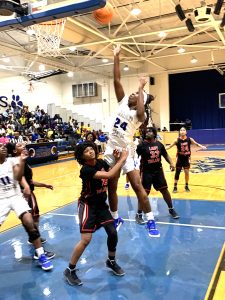 From that point on, the Lady Trojans were not able to make a serious threat to get back in the game. Near the end of the game, ASHS pressed full court and generated points of turnovers. As a result, they went on to win 65-41.

Judge led the Lady Trojans in scoring with 19 points. Nine of those points came from beyond the arc.

Up next for ASHS is a Region 1-AAAA home game against Columbus on Tuesday, December 3. Tip off is scheduled for 6 p.m.