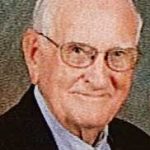 The family will receive friends on Thursday between the hours of 10:00 & 11:00 AM at Central Baptist Church, and at other times at the family residence, 1710 Armory Drive.

Born July 7, 1920 in Anderson, SC, he was a son of the late William Carl Austin and the late Maude Griffin Austin. Mr. Austin was President of Austin Urethane and a member of Central Baptist Church, where, at the time of his death, he was the oldest member. He had been an active member of M.B. Council Lodge No. 13, Free & Accepted Masons; a  member of Sumter Shrine Club, Al Sihah Shrine Temple in Macon, and the Royal Order of Jesters; and a member of Alexander H. Stephens Camp, Sons of Confederate Veterans.

He was a World War II veteran, having served in the United States Army Air Corps.

In addition to his parents, he was preceded in death by his wife, Christine Allmon Austin; and by four brothers and five sisters.

Flowers are welcomed, and for those wishing to do so, memorial contributions are suggested to Shriners’ Children’s Hospitals, c/o Sumter Shrine Club, 1209 Crawford St., Americus, GA 31709.

Hancock Funeral Home, 427 S. Lee St., is honored to be entrusted with these arrangements for Mr. William Harold Austin.