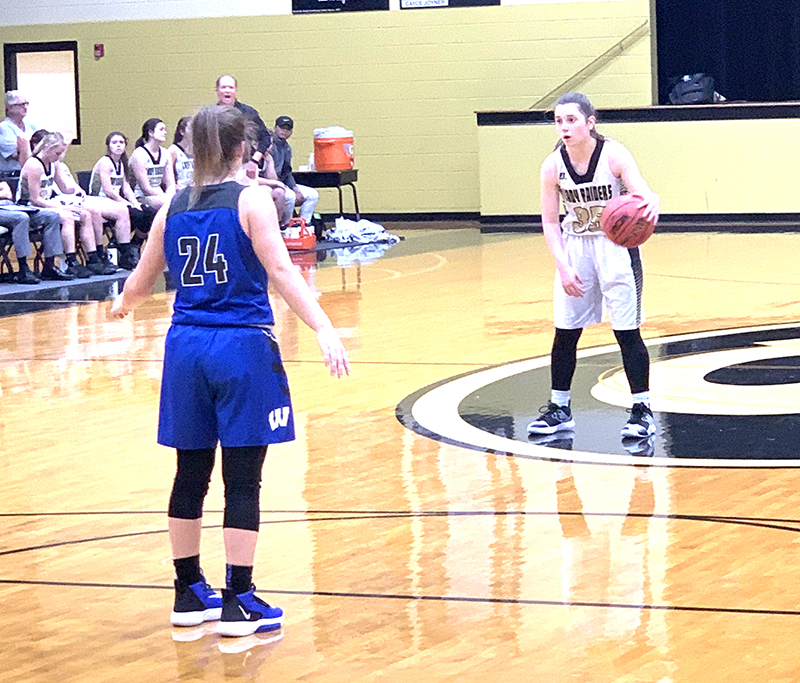 AMERICUS – The Southland Academy Lady Raider basketball team jumped out to a 14-0 lead in the first quarter and never looked back on their way to a 56-16 rout of Windsor Academy (WA) on Friday, December 6, at Southland Academy (SA).

With the win, SA remains undefeated at 4-0.

SA had two players score in double figures. Riley Mitchell led the Lady Raiders in scoring with 14 points and Haleigh Warren had 10. Morgan Weaver scored nine points and Maddie Crisp chipped in six in the winning cause. 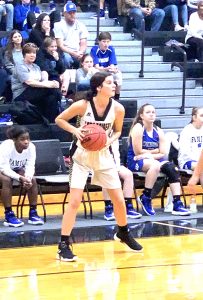 The Lady Raiders jumped out to a 14-0 lead in the first quarter, mostly on the strength of four three-pointers. Mitchell knocked down two three-pointers and Warren sank two from beyond the arc. WA struggled to get into their offense and struggled to make shots during the entire first half. By the 3:56 mark of the second quarter, SA led 22-6. With a little over three minutes remaining in the half, Mitchell hit a baseline jumper to increase SA’s lead to 24-6.

While the Lady Raiders didn’t implement a full-court press that much in the first half, their defense still made it difficult for the Lady Knights to score. By halftime, SA led 24-6.

To begin the second half, SA implemented a full-court press and forced the Lady Knights into committing turnovers. The Lady Raiders went on an 11-0 run to start the second half, capped off with a layup by Crisp. By the 4:07 mark of the third quarter, SA led 37-6. 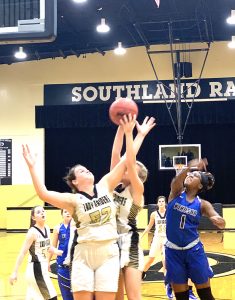 Southland Academy players Holly McCain (52) and Maddie Crisp (24) both go for a rebound against Windsor Academy.
Photo by Ken Gustafson

The Lady Knights struggled taking care of the basketball for the remainder of the game and could not keep up with the quicker, faster players on the Lady Raiders’ squad. SA was able to force several turnovers and get fast-break baskets. By the 3:40 mark of the fourth quarter, the Lady Raiders led 49-16.

With a big lead, SA head coach Ty Kinslow was able to give his inexperienced players some valuable playing time, but there was not much drop off. SA continued to score and finished the game strong. 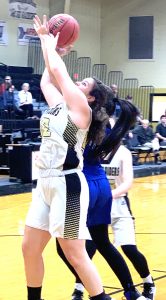 Up next for the Lady Raiders is a home game against Crisp Academy on Tuesday, December 10. Tip off is scheduled for 6:30 p.m.