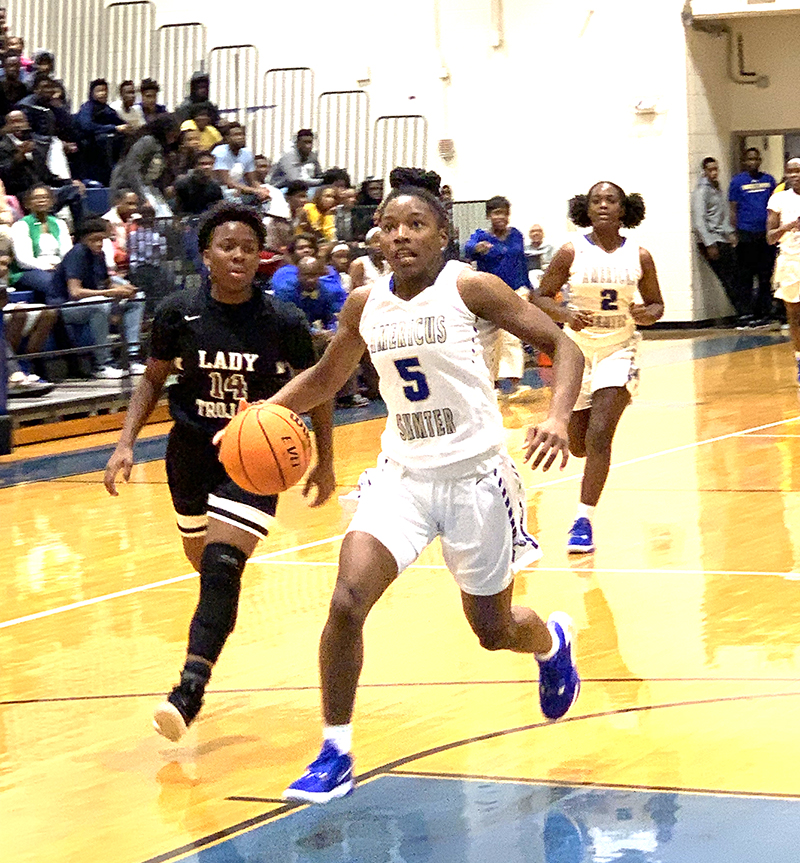 Americus-Sumter guard Jelissa Reese drives to the basket against Dougherty. Reese scored 13 points in the win over the Lady Trojans. Photo by Ken Gustafson

AMERICUS – As it was in Albany, so it was in Americus. The Americus-Sumter girls’ basketball team (7-0) did the same thing to the Dougherty Lady Trojans that they had done to them two weeks ago down in Albany. The Lady Panthers used an early 6-0 run to take control for the rest of the game on their way to an 82-35 rout of the Lady Trojans on Saturday, December 7, at Americus-Sumter high School (ASHS).

In the first meeting between the two schools at DCHS on Tuesday, November 26, ASHS won 72-31.

“We try to keep it up tempo and try to control the game defensively and it usually yields good turnovers,” ASHS head coach Sherry Harris said. “We’re so athletic and the girls play, like, super hard so that helps out too.
According to maxpreps.com, ASHS is currently ranked #1 in the state in the GHSA Class AAAA girls’ basketball rankings and is ranked #2 in the state of Georgia in all classifications.

In addition to dominating the Lady Trojans on both occasions, the Lady Panthers have used their skill, speed and athleticism to dominate all of their opponents on the schedule so far. Currently, they are beating their opponents by an average of 34 points a game. 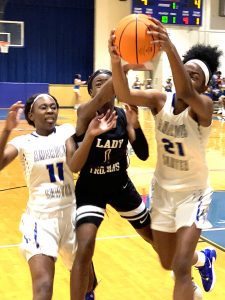 Americus-Sumter sophomore center Trinity Jackson (21) and senior guard DeAsia Ford (11) both try to save the ball from going out of bounds.
Photo by Ken Gustafson

Trinity Jones led all scorers with 26 points and Jelissa Reese scored 13. Two other Lady Panthers were in double figures. Both Trinity Jackson and Brianna Pope each scored 11 points. Both DeAsia Ford and Divine White rounded out the scoring with eight points each.

With the score tied at 4-4 early in the game, the Lady Panthers scored six unanswered points, including baskets from Jackson and Ford. From that point on, it was all Lady Panthers. As they did to DCHS in the first meeting between these two teams, the Lady Panthers used their defensive pressure to create turnovers and scored numerous transition baskets off of those turnovers. By the end of the first quarter of this second matchup, ASHS led 30-8.

The onslaught continued in the second quarter and it led to a 50-17-halftime lead for the Lady Panthers.
Jones scored 20 of her game-high 26 points in the first half. 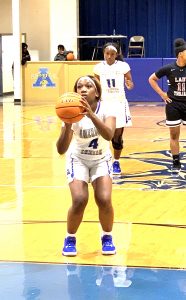 The Lady Panthers did not take their foot off the gas pedal in the second half. They continued to use their relentless and stifling defensive pressure to force turnovers and they continued to score off of those turnovers.
Denver Bryant led the Lady Trojans with 10 points.

Up next for ASHS is another Region 1-AAAA home game against Northside (Columbus) on Tuesday, December 10. Tip off is scheduled for 6 p.m.

Panthers improve to 6-0 with win over Dougherty