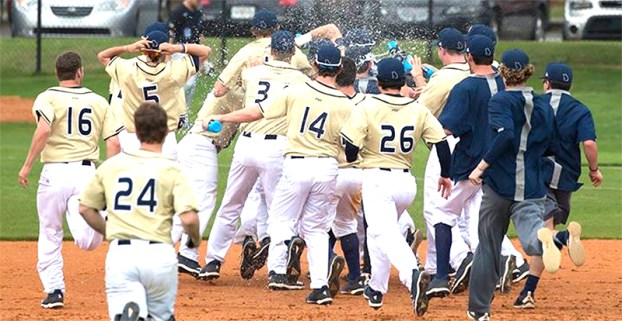 The Georgia Southwestern State University baseball team has announced its schedule for the upcoming 2020 season. Photo by Chris Lind

AMERICUS – Georgia Southwestern State University head baseball coach Josh McDonald and the 2020 Hurricane baseball team are gearing up for their 2020 season with a full slate of 50 games. The Hurricanes will play 28 home games this year at Hurricane Stadium, including the first four games to open their season.

The Hurricanes are set to return 22 players from last year’s squad, including reigning Peach Belt Conference (PBC) Pitcher of the Year and First-Team All-Conference player Tucker Smith. GSW went 14-16 in PBC play, winning five conference series and turning in the program’s best conference record since the start of the NCAA Division II era in 2006.

GSW opens their season Saturday and Sunday, Feb. 1-2 when they will host Barry University (Fla.) in a three-game series. The Hurricanes will then host Florida Tech on Wednesday, Feb. 5 before hitting the road for the first time.

The Hurricanes will visit West Alabama Saturday and Sunday, Feb. 8-9 and will then play a midweek game against Auburn-Montgomery on Tuesday, Feb. 11. GSW will then head to St. Augustine, Fla. where they will open up PBC play at Flagler College Friday and Saturday, Feb. 14-15. 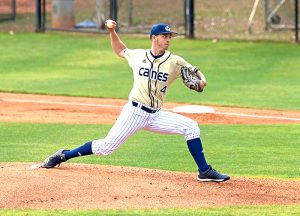 GSW senior right-handed pitcher Tucker Smith was the 2019 Peach Belt Conference Pitcher of the Year and was named First-Team All-Conference in 2019.
Photo by Chris Lind

GSW will then take the short trip down US Highway 19 to play Albany State on Wednesday, Feb. 19 before hosting the 2019 PBC Champions Young Harris College Saturday and Sunday, Feb. 22-23.

Valdosta State invites GSW out for a midweek game on Tuesday, Feb. 25. The Hurricanes will then close out their February slate of games when they host USC Aiken Friday and Saturday, February 28-29.

The Hurricanes invite Albany State over to finish their home-and-home series on Tuesday, March 3 before heading up to take on North Georgia Friday through Sunday, March 6-8.

In April, GSW opens up hosting Georgia College Friday and Saturday, April 3-4 before taking the short trip to play West Georgia in a midweek game on Tuesday, April 7.

Friday and Saturday, April 10-11, the Hurricanes will host Columbus State, followed by Valdosta State on Tuesday, April 14. GSW travels to play Lander University Friday through Sunday, April 17-19 before returning back to Americus to host their final home game of the season: a midweek matchup against Embry-Riddle (Fla.) on Wednesday, April 22.

The Hurricanes will close out their season on the road against Francis Marion Friday through Sunday, April 24-26.

In 2019, GSW went 23-30 overall and 14-16 in PBC play. The Hurricanes competed in the 2019 PBC Tournament, where they defeated North Georgia and Georgia College before falling to Young Harris to cap their 2019 campaign.

The 2020 Peach Belt Conference Tournament, hosted by Georgia College, will be held Friday through Sunday, May 8-10, in Milledgeville, GA.

From Staff Reports   ELLAVILLE – The Schley County High School football team had another successful season in 2019. The... read more