Wildcats score thrilling come from behind victory at Macon County 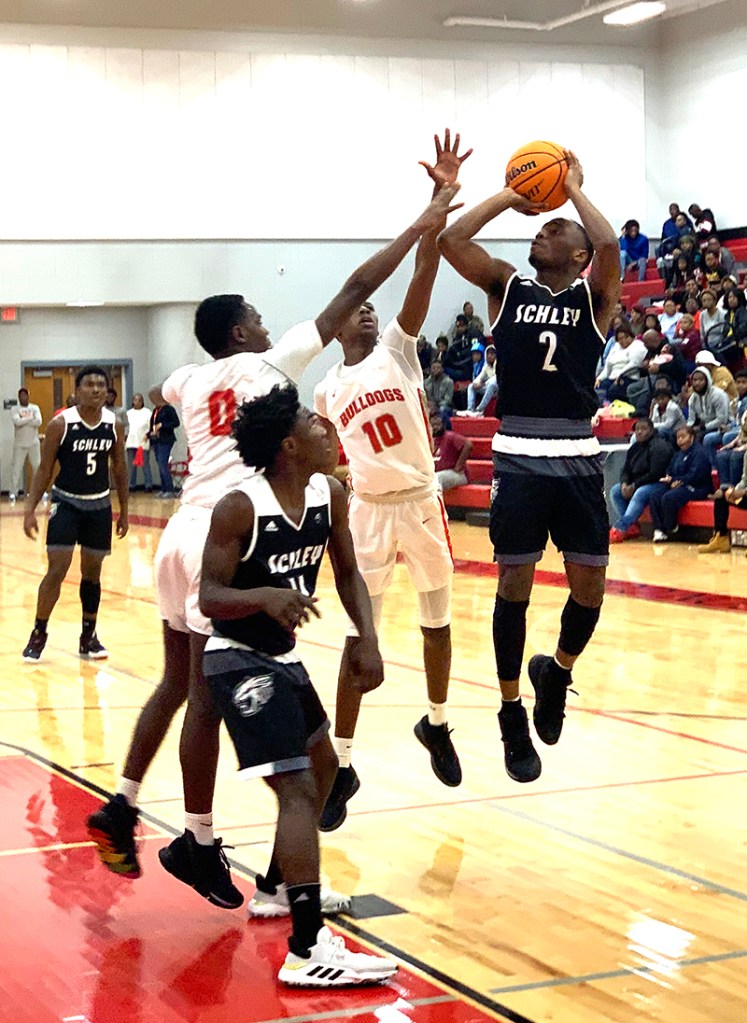 MONTEZUMA – It was the type of game that one would expect to be played in the state playoffs or for a state championship. Two evenly matched teams, Schley County (SC) and Macon County (MC), went toe to toe for 32 minutes in a thrilling contest between two Region 4-A rivals. However, late in the fourth quarter, the Wildcats used an 8-1 run to score a hard-fought 73-68 victory over the Bulldogs on Saturday, December 14, at Macon County High School.

With the win, the Wildcats improve to 3-2 on the season, while the Bulldogs drop to 6-2 .

Both teams shot the ball extremely well, particularly from behind the three-point line. Between the two teams, 17 three-pointers were drilled in this game.

However, the true difference in this game was free throw shooting.

“We made free throws down the stretch. We went seven for11 from the free-throw line and that helped,” SC head coach Ernest Scott said. “When you shoot 70 percent from the line, you’ve got a good chance of winning and then we got stops on the defensive end. I think our 1-3-1 sort of helped us out a little bit…changing up the defense. Playing a little bit of box and one on #1 (Shomari Gaines), their best player, I think kind of caught them off guard a little bit. The kids played well. We shot the ball a little bit better. We’ve just got to keep working.” 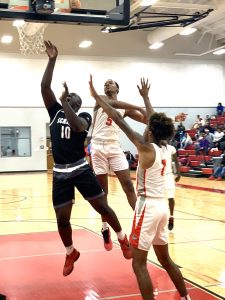 SC guard Deonte Cross led all scorers with 33 points and Zamon Ross had 11. Zykevious Walker scored nine points and Trypp Lumpkin chipped in eight in the winning cause. Gaines led the Bulldogs with 24 points and Troy Leary scored 15. All of Leary’s 15 points came on five three-pointers in the first half.

The Wildcats jumped out to an 11-1 lead to begin the game on the strength of three three-pointers. The Bulldogs went on a 7-0 run before Ross nailed a three pointer to give the Wildcats a 14-8 lead. However, MC went on a 7-3 run to close out the first quarter, with SC holding a slim 17-15 lead. 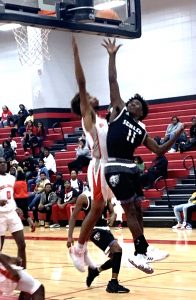 Schley County’s Cameron Solomon goes up for a layup against Macon County. Solomon scored two points against the Bulldogs.
Photo by Ken Gustafson

In the first quarter alone, the two teams combined for seven made three-pointers and five of them were made by the Wildcats.

Early in the second quarter, Cross responded with a short jump shot to give the Wildcats a 19-15 lead, but the Bulldogs responded by going on a 6-2 run to tie the game at 21-21.

With the score tied at 29-29, Cross received a pass as he was cutting to the basket and scored the layup. Having been fouled on the play, he made the free throw to give SC a 32-31 lead with a little over two minutes left before the half.

Both teams went toe to toe for the remainder of the half, but the Bulldogs led 39-36 at halftime. 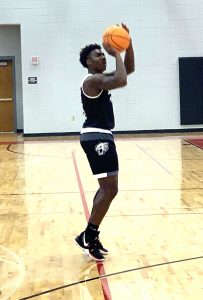 Schley County’s Zamon Ross is about to shoot a three-pointer. Ross scored 11 points in the win over Macon County. Nine of those points came on three-pointers.
Photo by Ken Gustafson

MC came out of the gate strong to begin the second half. The Bulldogs went on a 5-2 run, capped off with a three-pointer by Leary. However, with 3:34 to go in the third quarter, SC guard Dylan Taylor drove baseline and scored, cutting the Bulldogs’ lead to 44-40. This prompted MC head coach Willie Williams to call a timeout.

However, once play resumed, a technical foul was called against Cross. This resulted in four more points for the Bulldogs.

In spite of that setback, the Wildcats responded with five straight points to cut their deficit to 48-45. Then with 24.2 seconds to go in the third, Taylor grabbed on offensive rebound and scored to keep SC within three a 50-47. Then with one second, Walker tipped in a missed shot to keep the Wildcats’ deficit at 52-49 to start the fourth quarter.

The Wildcats fell behind 56-51 before Cross drove in and scored to cut the deficit back to three again. Cross was able to bring SC a point closer when he made one of two free throws.

With the Wildcats trailing 60-54, Lumpkin nailed a three-pointer to bring SC to within three. About a minute later, the Wildcats were finally able to cut their deficit below three points when Cross scored and completed the three-point play. Shortly thereafter, Lumpkin came up with a steal and passed the ball to Cross, who scored to give the Wildcats a 62-61 lead. Then with less three minutes left, Walker was able to score on a layup to increase the SC lead to 64-61.

After a basket by the Bulldogs, Scott called a timeout with 1:52 left in the game to set up his team’s offensive strategy.

Out of the timeout, Cross scored again on a layup to put the Wildcats up by three with a little over a minute left to play. Then with less than a minute, the Wildcats worked the ball around the perimeter before a pass was nearly stolen by the Bulldogs, but ended up in the hands of Cameron Solomon. Solomon promptly drove to the basket and scored. The Bulldogs responded with a basket of their own to cut the SC lead to 68-65. Shortly thereafter, however, the Wildcats would get a steal and a basket by Ross to put the Wildcats up 70-65 with close to 30 seconds to play.

MC responded with a three-pointer, but Cross was fouled on the Wildcats’ next possession and sank both free throws. Those free throws would prove to be crucial as the Bulldogs were not able to respond. With 7.3 seconds left, Walker knocked down one of two free throws to salt away the 73-68 victory.

Up next for the Wildcats is a home game against Region 4-A opponent Hawkinsville. Tip off is scheduled for 7:30 p.m.