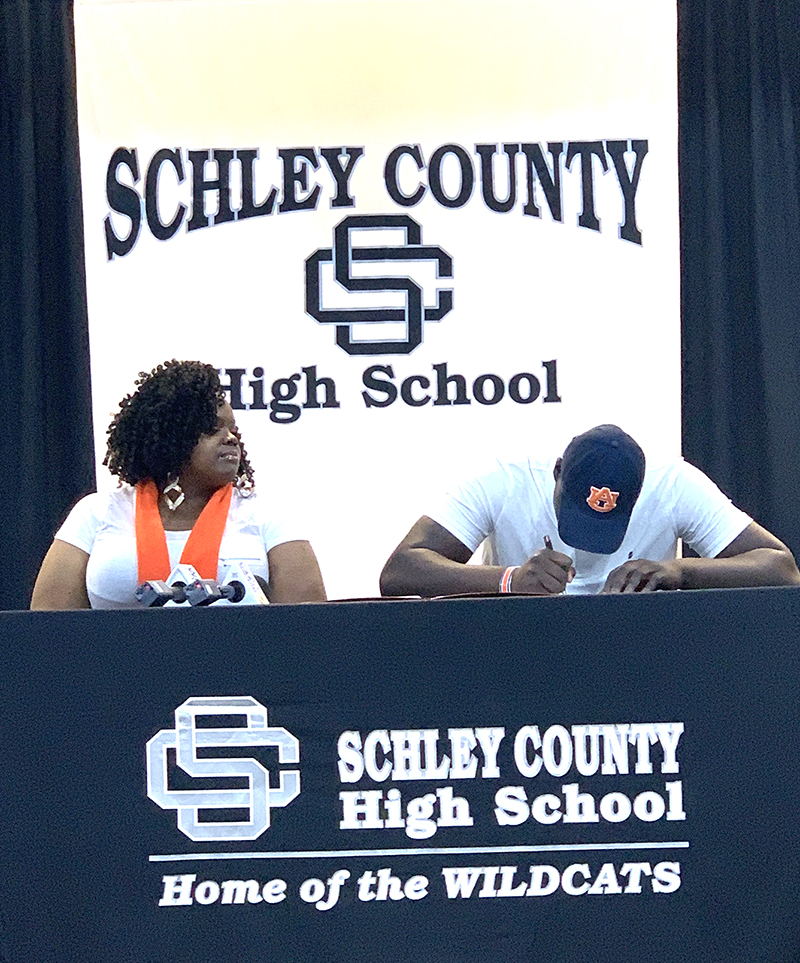 Walker signed his letter of intent in front of his teammates, classmates, coaches and family members in the Schley County High School gymnasium Wednesday morning at 10 a.m. Wednesday, December 18, was the early National Signing Day for many college football prospects.

According to www.rivals.com, Walker was rated as a four-star athlete and is one of the top defensive ends in the country. Walker was recruited by numerous big-time college football programs, including Georgia, Auburn, Tennessee, Florida and Alabama just to name a few. However, when it came time to make his decision, he chose to sign with Auburn because, in his words, it was the best fit for him and his family.

For any high school athlete who is signing a scholarship to play in college, the day he or she signs on the dotted line is one of the biggest days of his or her life, especially if they are signing with a major program. In Walker’s case, this was no exception.

“It’s a special moment for me and my family. I’ve been waiting for this moment for a very long time,” Walker said. “I prayed about it and God laid it on my heart that it was Auburn. I’m glad to be an Auburn boy now. It feels good. Many people thought I was going to Georgia. Auburn was on my heart, so I’m going to Auburn.”

Walker said that it was tough at times during the recruiting process, being that so many schools wanted him, but he relied on his faith in God to make the right decision. “It was hard at times, but you know, you just got to keep the Man above and pray about it and He’ll lead the way for you,” Walker said. 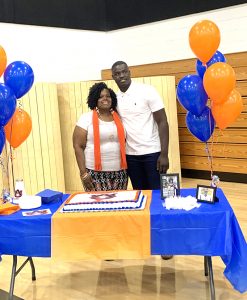 Zykevious Walker stands with his mother, Melanie Walker, next to an Auburn cake and balloon display.
Photo by Ken Gustafson

While Walker was a fantastic football player at Schley County, many of his teachers, coaches and friends that were at his signing ceremony emphasized over and over again the fact that he is just as much a fantastic human being. Walker has made a tremendous impact on numerous people in Schley County, including first-year SCHS principal Harley Calhoun. “We’re just so proud that he is signing today and signing with Auburn University,” Calhoun told the assembled crowd. Calhoun went on to say that in the short time he has known Walker, he could already tell that he is just as great a person as he is an athlete.

Schley County School Superintendent Brian Hall stated that Auburn University is the big winner in this event. Hall said that wherever he traveled throughout the state of Georgia, everyone was asking where Zykevious Walker was going to play college football. “My response was always, ‘I don’t know’. Z is going to make the right decision. He’s proven that for a long time now,” Hall said. “I said, ‘Wherever he ends up going, whatever choice he makes, he’s going to make an impact and it’s not going to be just on the football field or the basketball court.” Hall went on to thank Walker for how he has represented his family, the school and the community during his time at Schley County. He also commended Walker for how he has handled all of the scrutiny for the past three years. “That’s a very hard thing to do because there has been a lot of eyes on you for three years consistently,” Hall told Walker. “You’re the same kid I use to see over their in the parking lot. It didn’t matter if you were talking to classmates, little kids, anybody that came up to you. You’ve always had the time to be personal and to be humble,” Hall continued.

Zykevious Walker with his mother, Melanie Wallker, to the left, surrounded by his football teammates and coaches.
Photo by Ken Gustafson

SCHS Athletic Director Gabe Theiss also emphasized that Walker is not only a great athlete, but a great person as well. Theiss continued by praising Walker for the humility that he has shown to others throughout his career at Schley County, especially to children. Theiss, who has an 11-year old son, mentioned that Walker would always take time to spend with his son, who looks up to him. “Auburn is the big winner here.” Theiss said. He emphasized to the crowd that Auburn University is getting a winner in Walker not just as a great football player, but as a great person as well.

SCHS head football coach Darren Alford talked about the impact that Walker’s family has made on him in helping him to become the person that he is today. “His mama’s been so good to him. She’s worked so hard. His family has been so great to him,” Alford said. “I’m just excited for them and what they’re going to get to experience in the future. I’m really excited for the family. I’m excited for Schley County for the things that we’re going to get to see. We get to turn on a TV Saturday afternoon and we get to look at it. I get to tell everybody, ‘Yeah, I coached that guy right there’. Hopefully one day, I can turn on the TV Sunday afternoon and look at it and say, ‘Yeah, I coached that guy right there.’ I’m a part of his life. I had a lot to do with it.” Alford went on to emphasize that Auburn University is not just getting a great football player, but a great young man as well. 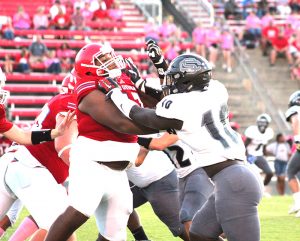 Zykevious Walker (10) in action against Hawkinsville during the 2019 season.
Photo by Sheila DeVane

Walker had a tremendous senior season for the Wildcats and helped lead SCHS to a 7-5 overall record and a berth in the quarterfinals of the GHSA Class A-Public State Playoffs. During his senior year, Walker led the team in total tackles with 70. He had 28 solo tackles, 24 assisted tackles and 22 tackles for loss, along with eight sacks. He also caused two fumbles.

While his greatest asset was on the defensive side of the ball, Walker excelled on the offensive side as well. As a tight end, he caught 10 passes for 132 yards and one touchdown reception. Walker was also used as a running back for the Wildcats. He rushed for 170 yards on 37 carries and scored five rushing touchdowns.

Walker, who will be majoring in Business Management, plans to play in the NFL once his college career is over, but once his days of playing football are over with, he would like to start his own business.

Walker will get his first taste of college football when the Tigers open the 2020 regular season at home against Alcorn State on Saturday, September 5.