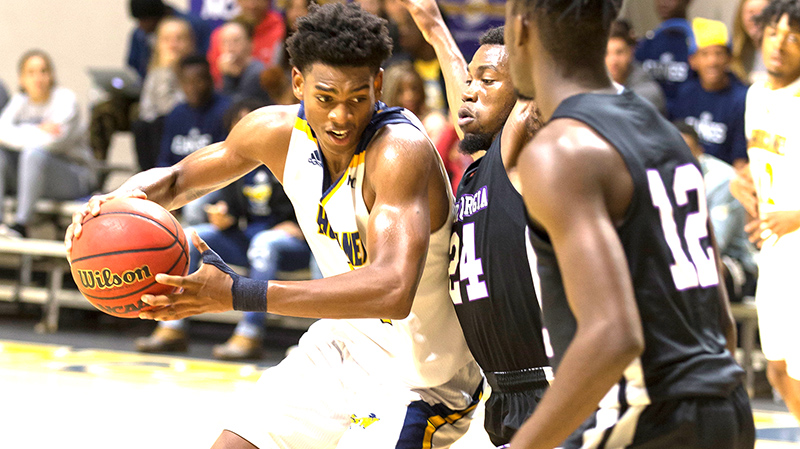 AMERICUS – With 2:29 to go in regulation, the Georgia Southwestern State University men’s basketball team (GSW) had a 54-47 lead, but the Nighthawks of North Georgia (UNG) outscored the Hurricanes 9-2 the rest of the way to send the game into overtime tied at 56-56. The tying basket came from UNG reserve Zezmon Steeple. The Hurricanes tried to regroup in the overtime period and salvage the win, but the Nighthawks began the extra session by outscoring GSW 8-2 in the first minute and a half. As a result, the Hurricanes were not able to regain the lead or make a comeback and fell to UNG 72-65 on Wednesday evening, January 8, at the Storm Dome.

With the loss, the Hurricanes drop to 6-4 overall on the season and 1-3 in the Peach Belt Conference (PBC).

For most of the first half, it was a back-and-forth affair between both teams, but with three minutes left, the Hurricanes scored eight unanswered points to take a 29-24 lead at halftime.

Up until the 15:53 mark of the second half, both teams were trading baskets and GSW had a 34-28 lead. However, over the next four minutes, the Nighthawks went on a 10-4 run, which was capped off by a three-pointer from Steeple. UNG eventually overtook the Hurricanes at the 7:33 mark on a layup by Carrod Watson.

However, GSW responded almost two minutes later as junior guard Josh Press knocked down a three-pointer to give the Hurricanes a 48-47 lead. This was the beginning of a 9-0 run by GSW. At the 2:29 mark of the second half, Dean completed the run with a layup to give GSW a 54-47 advantage.

In the overtime period, the Nighthawks simply made more plays than did the Hurricanes and ended up winning 72-65. With the win, UNG improves to 6-7 overall and 1-4 in the PBC. They were led in scoring by Tshimanga with 17 points. Watson was also in double figures with 10 points.

The Hurricanes will try to rebound from this setback when they travel to St. Augustine, FL to take on the Saints of Flagler College on Saturday, January 11, at 3:30 p.m.