The Schley County Baseball Team celebrates with a dog pile after winning the 2017 State Championship. Photo by Tim Morse

ELLAVILLE, GA – The Schley County Baseball Team was recently voted the “Team of the Decade” by the Georgia Preview Magazine at this past weekend’s Georgia Dugout Club’s winter meetings. Since the Georgia High School Association (GHSA) separated into a public and private divisions in 2013, only four programs: Charlton County, Schley County, Gordon Lee, and Treutlen have won state baseball championships.

While Charlton, Schley, and Gordon Lee have won two titles each, Schley County won 79.4 percent of its games during the decade (2019-2020) and garnered the Best Public Small School program of the Decade. The Wildcats combined to win 243 games and lost just 63. Schley County won state titles in 2015 and 2017 and finished as the state runner up in 2019. From 2013 to 2019, the Wildcats won six region titles over the seven-year span.

“We’ve been blessed to have some great players at Schley over the years and I’ve been very fortunate to have some phenomenal coaches to work with since we got here in 2004,” Schley County head baseball coach Chuck Cheek said.  “All of the guys who were there in the mid to late 2000’s helped build the program and establish and expectation of winning that has carried over each year”.

“Winning that first championship in 2015 was special after we had come close so many times. Doing it again in 2017 was more than we ever dreamed of,” Cheek said. “I’m humbled and proud to be he head coach at Schley and to get to work with some great coaches and young men every day. God has certainly blessed us more than we deserve.” 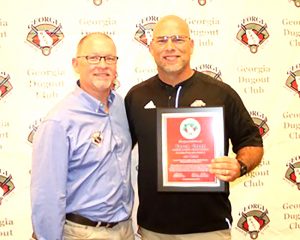 Cheek was voted the State Baseball Coach of the Year two times in 2015 and 2017. William Rooks (2015) and Jody Sellars (2017) were also honored as the Assistant Coach of the Year. Schley County players have also received top honors from the state as Brett Usry (2015) and Will Barry (2017) were named State Player of the Year for their respective seasons. Over the decade, the Wildcats have had 15 players receive scholarships to continue playing baseball at the collegiate level.

Over the weekend, Cheek was also honored with a plaque commemorating his 400th win, which occurred last season in Game 3 of the Final Four series against Irwin County. Cheek has a career record of 401 wins against 127 losses. He has won 10 region championships in his 21-year career to go along with the two state titles.