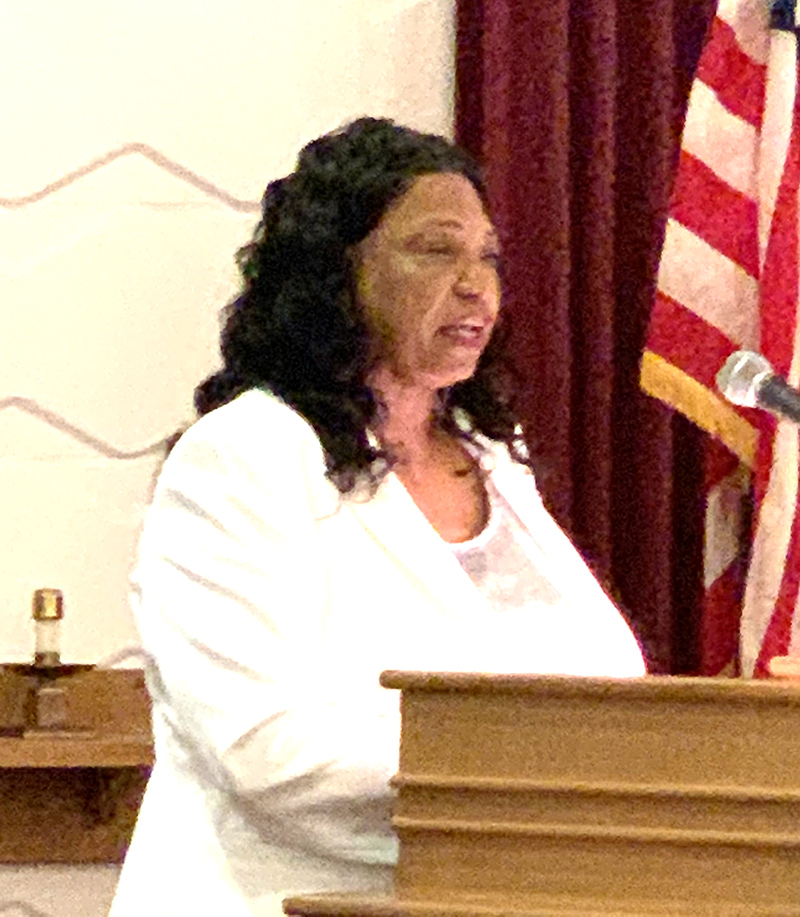 Dr. Shirley Green-Reese, one of the “Leesburg Stockade Girls” shares the horrific ordeal that she and 14 other girls went through during their incarceration in a jail in Leesburg, GA during the summer of 1963 for challenging the local segregation laws of that time. Photo by Ken Gustafson

ALBANY – Former Harvard professor George Santayana is believed to have said that those who cannot remember the past are condemned to repeat it. For this reason, the stories of those human beings who endured cruel treatment during the turbulent era of the Civil Rights Movement must be told time and time again for posterity so that future generations will not allow such atrocities to be perpetrated ever again.

One such story of injustice was told on Thursday, January 16, at the base chapel at the Marine Corps Logistics Base Albany.

Americus native Shirley Green-Reese, Ph.D, shared first-hand testimony of her experience as one of the “Leesburg Stockade Girls” to a group of approximately 200 people as part of a Martin Luther King, Jr. observance and celebration service.

In the summer of 1963, at the age of 13, Green-Reese, along with 14 other girls ranging from ages 12 to 15, were held captive in the stockade facility in Leesburg, Georgia. That facility still stands today and is located across the street from the Lee County High School Ninth Grade Campus.

“On July 15, 1963, I, along with 14 young black girls ranging again in ages 12 to 15, and approximately 200 or more demonstrators, were arrested and jailed for challenging segregation laws in Americus and Sumter County,” Green-Reese said.

As a result of challenging the law by attempting to purchase tickets at the white-only ticket box, the children were arrested without being formally charged and their parents had no knowledge of where they were being held.

“We did not commit any crimes. We did not break any laws or violate any rules for the horrific punishment we received.” Green-Reese said. 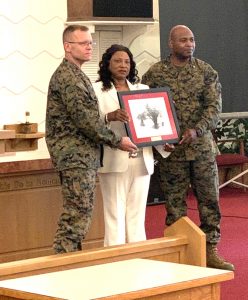 Dr. Shirley Green-Reese (middle) is presented with a commemorative plaque with a picture of the Dubber’s Oak Tree. This tree is a Southern Live Oak tree that is located on the Marine Logistics Base Albany. At the base of the tree is a plaque describing Col. A.E. Dubber’s significant role in the construction of the military installation. To the left of Dr. Green-Reese is Major General Joseph F. Shrader. To the right of Dr. Green-Reese is Col. Alphonso Trimble.
Photo by Ken Gustafson

She, along with other children, was taken by truck to an unknown location in Dawson, GA where they were held overnight without food or water in a crowded jail with other demonstrators. Early the next morning, Green-Reese, along with 14 other girls, was transported to the stockade in Leesburg, GA, where they all endured inhumane conditions that included dirty floors, inadequate food and no access to running water, working toilets or showers.

“As young black girls ranging in ages 12 to 15, we endured many psychological, mental, physical and health-related problems during our deplorable detainment in the Leesburg Stockade,” Green-Reese said.

She went on to say that they were held in these conditions for approximately 60 days and that the authorities as to their whereabouts did not notify their parents until two weeks after their arrest.

The girls were held at the Leesburg Stockade from July 16, 1963 until the middle of September 1963. This structure still stands today and is located across the street from the Lee County High School Ninth Grade Campus.

During their incarceration, the girls had no visitors from anyone until a month into their confinement when Danny Lyon, a 21-year old photographer with the Student Non-violent Coordinating Committee (SNCC) found out about the girls’ whereabouts. Lyon was able to sneak on to the stockade grounds and took pictures of the girls held inside the jail. According to Green-Reese, the photographs were sent to several African American newspapers across the country. Lyon also submitted photographs to former New Jersey Democratic U.S. Senator and Civil Rights supporter Harrison Williams Jr., who entered the information into the National Congressional Record in Washington, D.C.

Green-Reese said that soon after that, an order was sent from Washington in mid-September 1963 demanding that the Leesburg city officials release the girls from the stockade. Their ordeal got the nation’s attention concerning the issue of civil rights. “Dr. King and thousands of demonstrators and the Leesburg Stockade Girls have made a tremendous difference in what is happening today in society,” Green-Reese said.