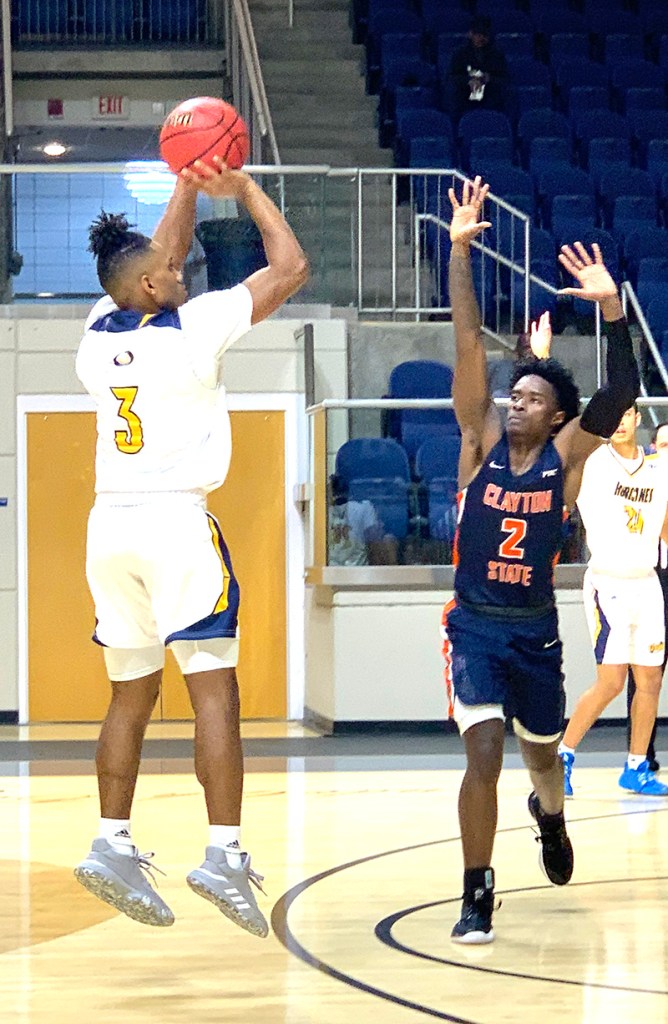 AMERICUS – It was an extremely fast-paced and high-scoring affair between the Georgia Southwestern State University men’s basketball team and Clayton State University (CST). However, while the game was tied a few times during the early stages, the Hurricanes never trailed. They were able to build a double-digit lead in the closing minutes of the first half and maintained their lead throughout the rest of the game en route to a 98-81 Peach Belt Conference (PBC) victory over the Lakers on Wednesday, January 15, at the Storm Dome.

“I’m very happy. I’m happy with how we played,” GSW head coach Aaron Coombs said. “We got thumped the last time we came out. We had a good two days and our guys did a good job…made it a good two days. This is a win we needed. I’m glad to see us be able to respond and protect our home floor. This puts us right back in the mix in the league.” Coombs went on to say that he has been preaching toughness to his team, particularly mental toughness. In their last outing on Saturday, January 11, the Hurricanes were drubbed by the Saints of Flagler College 109-77.

The Hurricanes had six players score in double figures. Soloman Thomas and Jalen Cameron each scored 18 points to lead GSW and both Abdul Dial and Jamari Dean poured in 17. Dean posted a double-double with 17 points and 13 rebounds. Kahlon Whitley was also in double figures with 14 points. Josh Press also contributed to the GSW scoring column with eight points. 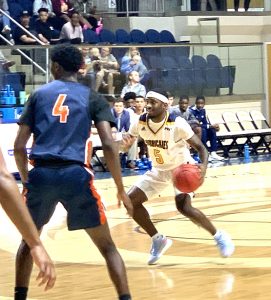 The Lakers were led in scoring by Kyle Kincey with 19 points. Tionne Williams Jr. poured in 17 points. Byron Abrams had 14 and both Bryan Hart and Ricardo Saams Jr. were also in double figures for CST with 13 and 11 points respectively.

During the first four and a half minutes of the game, both teams were playing at an extremely fast pace, with GSW owning an 11-9 lead. Both teams continued to trade baskets up until the 9:50 mark of the first half, when Press scored to give the Hurricanes a 23-19 lead. 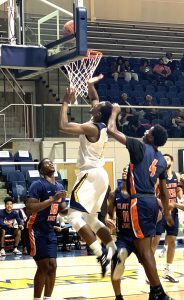 GSW senior guard Abdul Dial goes up for an offensive rebound and a basket. Dial scored 17 points in the Hurricanes’ win over Clayton State.
Photo by Ken Gustafson

However, over the next four minutes, GSW outscored the Lakers 10-7 to take a 33-26 lead. By the 2:15 mark, the Hurricanes had a 39-33 lead before Dean was fouled and made one of two free throws. From that point until halftime, GSW went on an 11-4 run to close out the half. The last basket came off a steal and dunk at the buzzer by Dean to give the Hurricanes a 50-37 halftime lead. 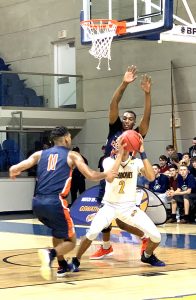 Both teams came out scoring to begin the second half, but CST guard Byron Abrams cut the Hurricanes’ lead to 10 at 56-46 three minutes into the half. Over the next two minutes, both teams scored almost at will as the fast-pace tempo of the game continued. With 14:55 to go, GSW called a timeout leading 60-52.

Out of the timeout, Dial drove baseline and found Dean for a layup to increase the GSW lead to 62-52. This was the beginning of a 6-0 run by the Hurricanes, which was capped off by another basket from Dean. Thomas would later hit a short jumper to give the Hurricanes a 70-55 lead just before timeout was called with 11:46 to go in the game.

Over the next two minutes, both teams continued to trade baskets, but the Lakers were able to cut GSW’s lead down to 74-66 on a fast-break dunk and made foul shot by Ricardo Saams Jr. with a little over nine minutes left. That would be as close as the Lakers would get for the rest of the game. With less than eight minutes to play, Cameron was able to score on the inside to push the Hurricanes’ lead back up to nine at 76-67.

During the first 12 minutes of the second half, the Hurricanes did a good job of getting offensive rebounds, which contributed greatly to them being able to score and hold on to their lead.

After two made free throws by CSU’s Gabriel Joseph-Bryan, Press knocked down another three-pointer to give GSW a 79-69 lead. Over the next three minutes, both teams continued to trade baskets, but GSW still maintained an 85-77 advantage when timeout was called with 4:40 to go.

Out of the timeout, Thomas scored a basket when goal tending was called against the Lakers. Then with 2:40 to go, Thomas scored again and was fouled. He was able to complete the three-point play to give GSW a 90-77 lead. With 1:32 to go, a technical foul was called against CSU and Thomas made one of the technical foul shots. Being that there was also a personal foul against the Lakers, Cameron went to the foul line and made both free throws. By this time, the game was well in hand and the Hurricanes went on to win 98-81.

Up next for GSW is a road trip to Milledgeville, GA on Saturday, January 18, to take on Georgia College. They will follow that up with a home game against Francis Marion University on the Martin Luther King Jr. Holiday at 3:30 p.m.