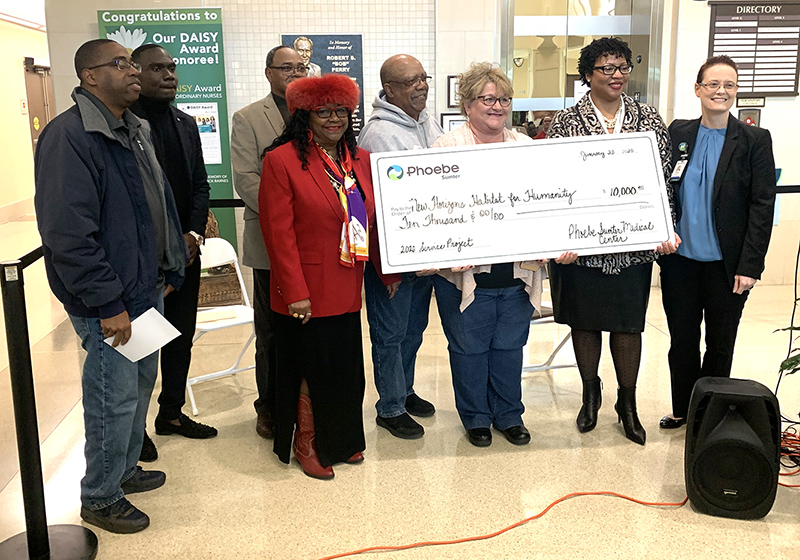 AMERICUS – A small crowd gathered in the main lobby of Phoebe Sumter Medical Center to celebrate the life and legacy of Dr. Martin Luther King Jr. It was a ceremony to honor Dr. King’s legacy of service and to here about the upcoming service project to be done between Phoebe Sumter and New Horizons Habitat for Humanity.

Lori Gadson, Executive Director for New Horizons Habitat For Humanity, the local chapter of the international organization known as Habitat for Humanity (HFH), was the keynote speaker at the event. Mrs. Gadson began her remarks by mentioning that she is a Christian and said that it would be impossible for her to talk about Dr. Martin Luther King Jr. and the other leaders, as well as herself, without acknowledging God.

Gadson went on to talk about the founding of HFH by Millard Fuller and Clarence Jordan, who, according to habitat.org, is considered to be the spiritual father of Habitat for Humanity. She talked about servant leadership and the characteristics of a leader. “Brave and passionate comes to mind when I think about the great Dr. Martin Luther King Jr.,” Gadson said. “All of you know what great work he has done for us…for all of the world really. The mere fact we are gathered here today in his name, some 52 years post his death, speaks volumes.” Gadson went on to say that while she has brotherly love for everyone in the room that she was speaking to, she could not say that she has the courage and bravery to lead the way that Dr. King did.

“He was truly chosen by God. His passion ultimately led to his premature demise, but there is one thing that we know for certain: that his legacy does continue,” Gadson said.

She went on to describe the leadership qualities of Clarence Jordan, the founder of Koinonia Farm, an interracial Christian farming community founded near Americus in 1942. Being that racial segregation was so prominent during that time, Jordan’s idea of a community made up of different races living together was extremely radical. “Visionary, transactional and transformational: Those words come to mind when I think of Clarence Jordan,” Gadson said. “He was definitely ahead of his time. He was also chosen by God. He was instrumental in the beginnings…in the development of Habitat for Humanity.”

Gadson went on to share with the group a quote written by former President Jimmy Carter, which to her has a direct correlation to Millard Fuller, the founder of HFH.

“The measure of a society is found in how we treat our weakest and most helpless citizens.”

Gadson said that to her, Carter’s statement was extremely powerful. “We are our brother’s keeper. We will keep them and support them whether it’s involuntarily or voluntarily,” Gadson said. “At some way and in some form, we’re all responsible.”

Gadson went on to tell the story of Millard Fuller, who founded HFH and how he gave up his opulent, luxurious lifestyle as a successful attorney because he realized it was pulling him away from the moral character that had been instilled in him as a young child. “He had a void and he was very troubled because of the major disparity that took place between his quality of life and the lives of other men, women and children in his very safe community,” Gadson said. She went on to say that because of the void Fuller felt in his life, he and his wife Linda sold all of their belongings and moved to Koinonia Farm and stayed their for five years. “He partnered with Clarence Jordan and others to begin to build affordable housing. In 1976, Fuller was the founding president of Habitat for Humanity,” Gadson said.

Today, HFH is a global non-profit organization that, in Gadson’s words, strives to provide a hand up and not a hand out.

Once again, New Horizons HFH will be partnering with Phoebe Sumter Medical Center (PSMS) in May of this year do a home renovation. PSMS CEO Brandi Lunneborg told the group assembled that it’s a service opportunity to help give the hospital’s employees the opportunity to give back to the community and to help improve housing for a family in need. “We enjoyed that so much and had a great time and we would like to do it again,” Lunneborg said.

Lunneborg told the Americus Times-Recorder that the project would be done during “Hospital Week”, which will be May 10-16 of this year.

At the end of the proceeding, Gadson was presented a $10,000.00 check from PSMS to go to continuing the mission of New Horizons Habitat for Humanity.