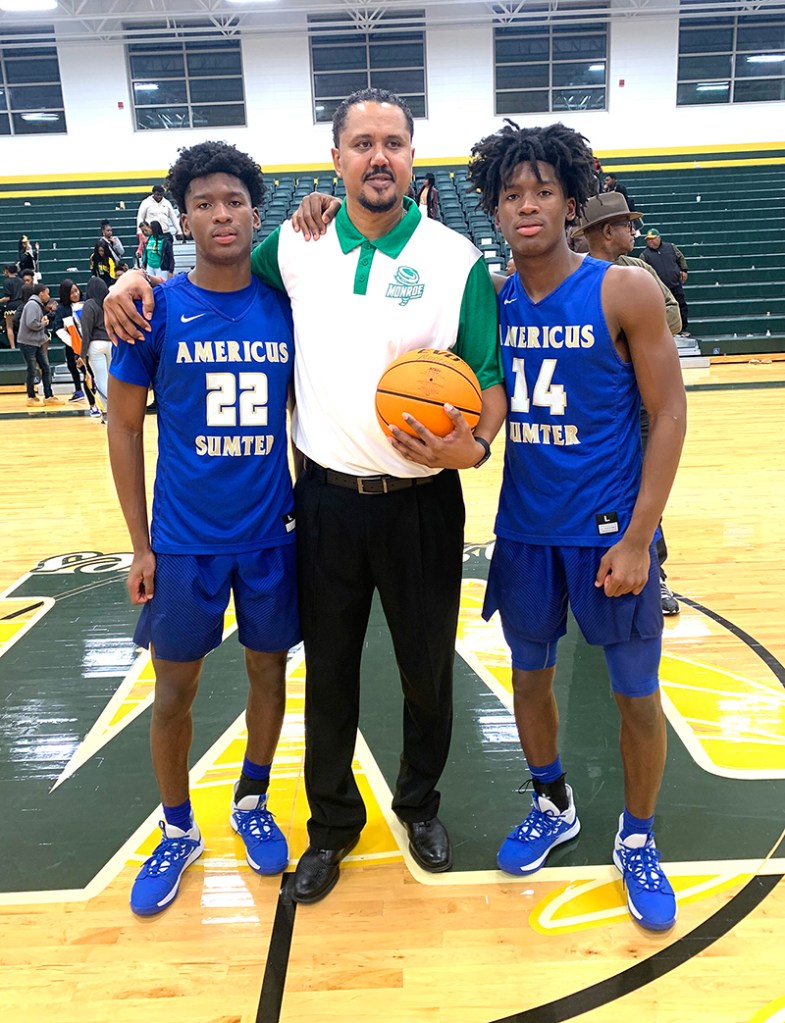 ALBANY – By the end of the Panthers’ 55-51 victory over Monroe in Monday’s MLK Classic at Monroe Comprehensive High School (MCHS) in Albany, it was evident that the work done over the years by current MCHS head coach and former Americus-Sumter (ASHS) head coach Michael Hoffpauir has continued to pay dividends for the Panthers. It was an extremely hard-fought battle between ASHS head coach Johnny Genwright’s club and that of his mentor’s, but the Panthers were able to come out on top and improve their undefeated record on the season to 19-0.

It has been a little over 10 months since Hoffpauir guided the Panthers to last year’s GHSA Class AAAA state championship game in which they fell to Carver (Columbus) 58-55.

For Hoffpauir, it was a rather odd feeling going up against the club he had built over the last few years and the relationships he had made with the players on the ASHS team he once coached. “It’s truly surreal. I knew those guys (ASHS) were tough. They’ve been forged in fire from a lot of things we’ve done over the years,” Hoffpauir said. “I’m just so proud of Coach Genwright and the staff for continuing that legacy that we started. It was tough playing against them. It was a very good challenge for us (MCHS). We stepped up, but we came up short. We stepped up and I think it was a good preparation for us going into the playoffs.”

Americus-Sumter guard Trae Brown goes up for a basket. Brown scored 14 points to lead the Panthers to victory.
Photo by Ken Gustafson

While he was pleased with his club’s hard-earned victory, Genwright knows that his team can and must play better, particularly on the offensive end. “I knew it would be an intense game. Our guys and their guys came out and played hard,” Genwright said. “We missed a lot of layups. We left a lot of points out there and missed some defensive assignments, but as we know, it was going to be a tough game. We just had to come and play and just wanted to get the win.”

Both teams fought each other back and forth in an up and down, fast-paced tempo throughout game. Both teams made plays on offense and defense. It simply came down to free throw shooting, turnovers and which team would make more plays when it counted. In the free throw shooting category, the Panthers edged out the Golden Tornadoes by making 16 of 20 foul shots (80 percent). MHS made 12 of 17 free throws (75 percent). While they weren’t able to build a big lead from points off turnovers, the Panthers were able to force MHS into committing just enough turnovers to make a difference. 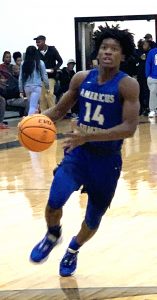 Once again, Trae Brown was the leading scorer for the Panthers with 14 points. Darion Mitchell poured in nine points, while Melton McCoy and Kanova Willoughby each scored eight points in the winning cause.

As for the Golden Tornadoes (15-6, 4-0), they were led in scoring by Marius Ellis with 16 points. Two other players were in double figures for MCHS. Kareem Nixon had 12 points and Domonik Henderson poured in 11. 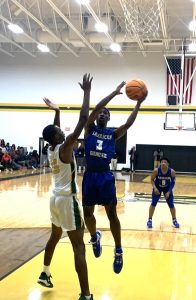 ASHS guard A’Jarrien Banks (3) goes up to try to score. Banks scored two points in the win over Monroe.
Photo by Ken Gustafson

Midway through the second quarter, MCHS had a 15-12 lead, but the Panthers were able to create several turnovers and scored six unanswered points to take an 18-15 lead. Mitchell was able to give ASHS a 20-16 lead with an offensive rebound and put back. However, the Golden Tornadoes responded with five unanswered points, including a basket and free throw by Henderson. The Panthers would have the last laugh of the half, however, as Brown knocked down a three-pointer with 11 seconds left to give ASHS a 23-21 halftime lead.

During the first half, both teams made several plays on defense. The Panthers were able to force turnovers with their swarming defensive pressure, but the Golden Tornadoes were able to draw charges against the Panthers. MCHS also came up with a few blocked shots.

During the first three minutes of the third quarter, both teams traded baskets, but the Golden Tornadoes took a 26-25 lead on a basket and free throw by Ellis.

Kanova Willoughby responded with a basket and converted the three-point play to give the lead back to ASHS. 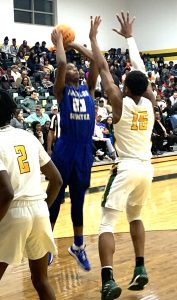 Americus-Sumter power forward Darion Mitchell (23) goes up to shoot against Monroe. Mitchell scored nine points in the win over the Golden Tornadoes.
Photo by Ken Gustafson

Over the next couple of minutes, both teams continued to trade baskets, but with a little over two minutes left, the Panthers decided to slow down their half-court offense and work for the good shot. They were able to find that good shot as Jordan Wiley found a hole in the MCHS defense, drove to the basket and scored to give ASHS a 32-30 lead. As the seconds ticked down in the third quarter, the Panthers had a 36-32 lead. However, Ellis was fouled by McCoy with 0.2 seconds left while trying to shoot a three-pointer. Ellis made all three foul shots to bring the Golden Tornadoes to within one at 36-35 to start the fourth quarter.

With a little over six minutes left to play in the game, MCHS took a 39-38 lead on a slam-dunk by Ellis. However, ASHS responded with three straight points to take a two-point lead. Both teams traded baskets over the next couple of minutes, but with 3:25 to go, the game was tied at 44-44. It was going to be a game that would go down to the wire. The team that would make the most plays and the fewest mistakes would come out on top.

With 3:11 to go, Mitchell was fouled while shooting and made both foul shots to give the Panthers a 46-44 lead before timeout was called.

Out of the timeout, the Panthers had the ball. Wallace Bradley drove towards the basket, but missed the shot. However, Mitchell was there for the rebound and got fouled. Mitchell hit one of two free throws to give ASHS a three-point lead.

The Panthers then went to their full-court press and forced a turnover. Brown was able to score on a layup to give ASHS a 49-44 lead. Feeling the intense pressure of the Panthers’ full-court press, the Golden Tornadoes turned the ball over again, giving the Panthers an opportunity to run more time off the clock and score.

With 1:25 to go, MCHS had the ball and Henderson was fouled, but he could only make one of the two foul shots.

As the Panthers worked the ball around the perimeter to try to run clock, the Golden Tornadoes tried to foul, but were unable to. ASHS was able to move the ball extremely quickly to avoid being fouled. The basket that basically sealed it for ASHS came on a pass to Quevoluia Willoughby, who scored on a layup. MCHS was unable to make a comeback and the Panthers survived a scare by the score of 55-51.

The Panthers will return to Region 1-AAAA competition when they travel down to Cairo on Tuesday, January 21, to take on the Syrupmakers. ASHS is currently at the top of the Region 1-AAAA standings at 10-0. Tip off is scheduled for 7:30 p.m.