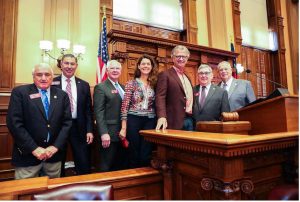 Speaker David Ralston recognized Representative Greene and invited Erik and Karin Vonk to join him behind his podium on the House floor during the House session.

“Richland Rum is made here in Georgia, by Georgians, putting Georgians to work, and sells in the top tier of its class around the world,” Speaker Ralston remarked.

“Erik and Karin Vonk are hard-working people bringing about the revitalization of the cities of Richland, Ga. and Brunswick, Ga.,” Representative Greene added.

In response, Richland Rum founder Erik Vonk thanked the Speaker and Representative Greene, stating: “The gratitude is really all ours. Georgia is the best State for business in the Union. The proactive government support that exists here does not exist anywhere else.”

“Without your leadership, Mr. Speaker, and the efforts of Representative Greene and Regulated Industries Committee Chairman Alan Powell (R- Hartwell), we would not be able to produce Richland Rum right here in Georgia and create distribution for our products in 15 states and export to 11 countries,” Vonk continued.

“Richland Rum, which is Georgia’s Spirit®, has only two ingredients: home grown Georgia sugar cane and water from the Georgia aquifer; at the same time, it is The Spirit of Georgia® that lives in the Richland Distilling Company, drives its people and is embodied by our home State. It is the Spirit of Georgia® that allows us to create, sell and export the best Rum known to mankind,” he concluded.

About the Richland Distilling Company, LLC

Established in 1999, the Richland Distilling Company has been a pioneer in crafting Rum from field to glass in America. Richland Rum has been recognized as “Best American Rum” by Robb Report in 2017 and Forbes Magazine in 2018 and has won multiple gold awards in tasting competitions around the world. Richland Distilling Company is comprised of Richland Estate, the company farm where sugar cane is cultivated, and Rum Distilleries in Richland and Brunswick, Ga.