Panthers pull away in second half to defeat Columbus 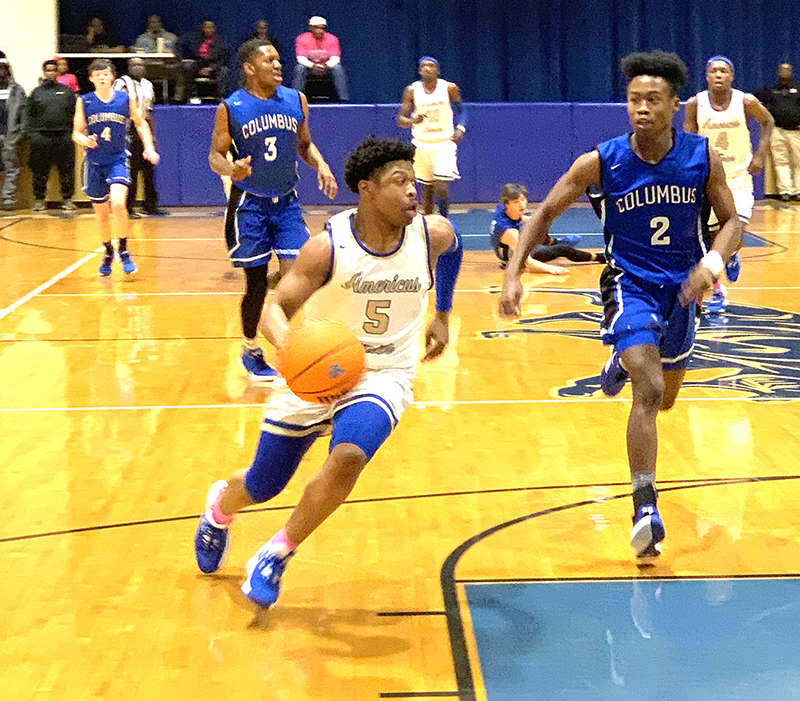 Americus-Sumter guard Le’Shanna Ross (5) drives to the basket. Ross scored two points in the win over the Blue Devils. Photo by Ken Gustafson

AMERICUS – For the first 16 minutes of the game between Americus-Sumter (ASHS) and Columbus (CHS), it looked as if the Blue Devils might just have a chance to pull off a major upset and hand the Panthers their first loss of the season. However, ASHS regrouped at halftime and took over the game in the second half, dominating their way to an 80-51 victory over CHS on Saturday, January 25, at Americus-Sumter High School.

With the win, the Panthers remain undefeated at 22-0 overall and are still in first place in the Region 1-AAAA standings at 13-0. They currently have a three-game lead over both Carver and Westover, who are tied for second place at 10-3.

For ASHS Head Coach Johnny Genwright, the main halftime adjustment that his team needed to make was turning it up a notch on defense and not giving up second- chance shots. “I told them that we had to turn it up on defense. We had to get our defense going,” Genwright said. “We were giving up too many shots…too many second chance shots. Our energy level was not there so I told them that we needed to pick it up. In the second half, we picked it up on defense, got a couple of steals and made layups.” 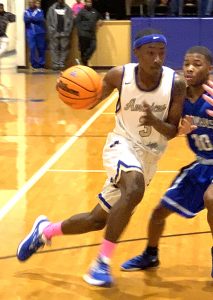 Americus-Sumter guard Jaheem Banks (3) tries to get past his defender. Banks scored two points in the win over Columbus.
Photo by Ken Gustafson

Three players finished in double figures for ASHS. Quevoluia Willoughby led the Panthers in scoring with 20 points, including four three-pointers. Trae Brown scored 17 points, with 12 of those points coming on four three-pointers. Kanova Willoughby was also in double figures with 16 points. Both Darion Mitchell and Jordan Wiley each chipped in six points for ASHS in the winning cause.

Both teams went toe to toe during the first half. During the early part of the first quarter, the score was tied at 4-4 before CHS guard Gray Voltz knocked down a three-pointer to give the Blue Devils a 7-4 lead. A few minutes later, with the scored tied 7-7, Charles Stone hit a three-pointer and was fouled. Stone made the free throw to complete the four-point play and the Blue Devils had an 11-7 lead. CHS continued to make enough shots and plays to stay in the game and had a 20-15 lead by the start of the second quarter. 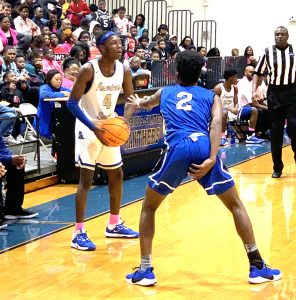 Throughout the first half, CHS was able to stay in the game partly due to their outside shooting and partly due to the fact that the Panthers struggled at times in their half-court offense. ASHS also committed a few turnovers, which negated scoring opportunities.

However, the Panthers got a three-pointer by Kanova Willoughby early in the second quarter, which allowed them to set up their full-court press. They used that press to generate points off turnovers and reeled off seven straight points to take a 25-20 lead, prompting a timeout by CHS.

Both teams traded baskets for the rest of the second quarter, but the Blue Devils were still in the game as ASHS led 35-31 at the half.

While CHS was able to make enough shots in the first half to stay in the game, the second half was a different story. The Panthers turned up their defensive pressure in the second half, forced turnovers and made it difficult for the Blue Devils to score.

As a result, the Panthers took over the game by outscoring CHS 23-9 in the third quarter.

Over the first four minutes of the fourth quarter, the Panthers continued to use their speed and quickness to score several fast-break baskets. With 4:46 left to play, ASHS had a comfortable 71-44 lead and went on to win 80-51. 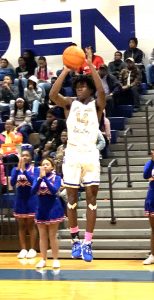 Americus-Sumter guard Kanova Willoughby goes up to shoot a three-pointer. Willoughby scored 16 points in the win over Columbus.
Photo by Ken Gustafson

With the loss, the Blue Devils drop to 10-13 overall and 5-9 in the Region 1-AAAA standings. Gray Voltz led CHS in scoring with 22 points.

ASHS will try to stay undefeated when they travel up to Columbus on Tuesday, January 28, for another Region 1-AAAA contest against the Shaw Raiders (9-13, 5-8). In the last meeting between these two teams in Americus on Tuesday, January 14, the Panthers won 79-42. Tip off for Tuesday’s game at Shaw is scheduled for 7:30 p.m.