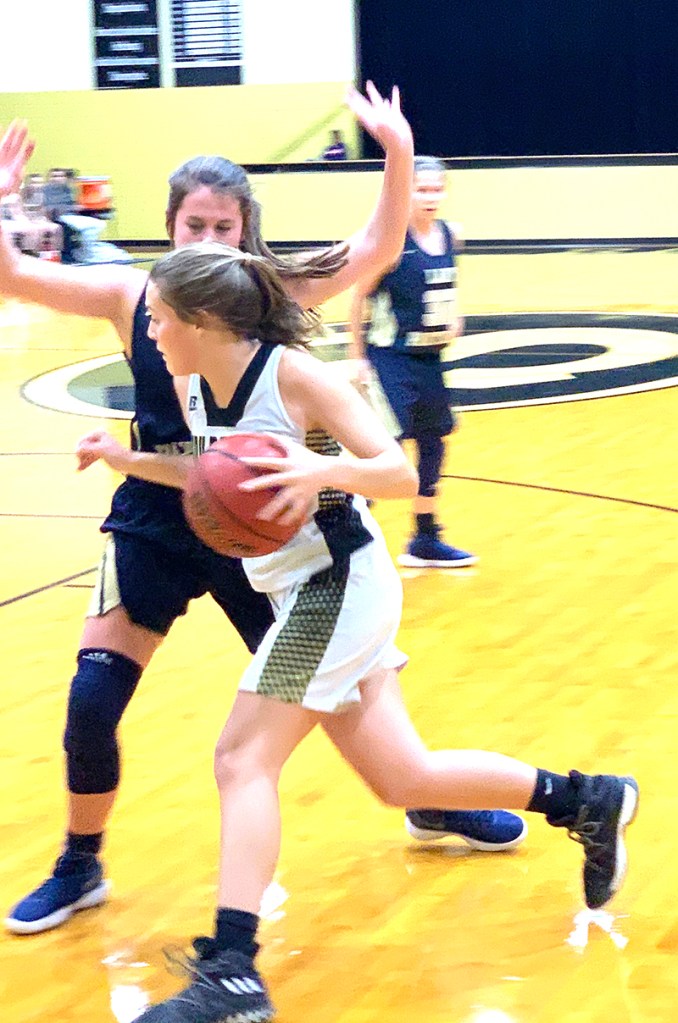 AMERICUS – The game between the Southland Lady Raiders (SA) and the Tiftarea Academy Lady Panthers (TA) was a game in which both teams had to grind it out to get the victory. Both teams played extremely hard and physical. However, the team that would win was the team that executed their offensive game plan down the stretch and made free throws down the stretch. The Lady Raiders were that team. Maddie Crisp and Holly McCain combined to make nine free throws in the fourth quarter to help salt away a 46-32 victory for the Lady Raiders on Tuesday, January 28, at the Melvin Kinslow Gymnasium.

“It’s going to be a grind-it-out game with Tiftarea every time because they play extremely hard. They get after you,” SA Head Coach Ty Kinslow said. “They bump you around. We bump each other around, but the thing is, down the stretch, we started executing and getting the ball to our players in a position where they can score and then down the stretch, we really knocked down free throws and that’s what you’ve got to do to win games.” 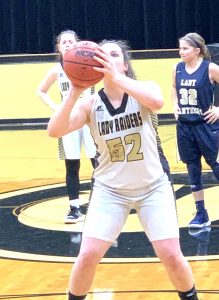 Southland Academy junior forward Holly McCain scored 20 points to lead the Lady Raiders to victory over Tiftarea Academy. McCain made eight of nine free throws in this game and five of those came in the fourth quarter.
Photo by Ken Gustafson

McCain led the Lady Raiders with 20 points and made eight of nine foul shots. Five of those free throws came in the fourth quarter. Crisp was also in double figures with 13 points. She made seven of nine free-throw attempts, with five of those coming in the fourth quarter. Riley Mitchell nearly made the double-figure scoring column as she scored nine points and Reese Roland chipped in four to round out SA’s scoring.

With the win, the Lady Raiders improve to 15-4 overall and they move into a tie for second place with TA in the Georgia Independent Schools Association (GISA) Class 3-AAA at 4-2. More importantly, the Lady Raiders have clinched their spot in the GISA Class AAA State Playoffs. 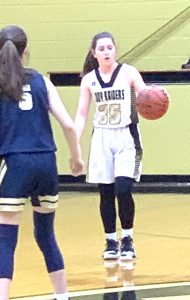 The score was tied at 8-8 after the first four minutes of the first quarter. However, the Lady Raiders went on a 5-0 run, which was capped off by a jumper from Roland. Both teams went scoreless for almost half of the second quarter until TA guard Eli Bryan knocked down a three-pointer, cutting SA’s lead to 13-11.

Around the 3:00 mark of the second quarter, the Lady Raiders had the ball and were working it patiently around the perimeter, trying to work for the good shot. McCain was able to grab an offensive rebound and score to give SA a 15-11 lead.

Neither team was able to score a lot of points during the first half due to strong defensive play by both teams. By halftime, it was a low-scoring affair with SA owning a 16-13 lead.

In the third quarter, the Lady Raiders jumped out to a 20-13 lead on a basket by Mitchell, but the Lady Panthers responded. They scored six unanswered points to cut SA’s lead to 20-19. Then with less than two minutes to go and the scored tied at 22-22, Roland was able to knock down a jump shot to give the Lady Raiders the lead. McCain would later score, get fouled and converted a three-point play to give SA a 27-23 lead with under a minute left in the third. Both teams traded baskets during the waning seconds, but the Lady Raiders owned a 29-26 lead by the start of the final quarter. 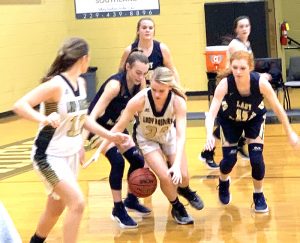 Over the first three minutes of the fourth quarter, neither team could score a lot of points, but with the Lady Raiders leading 31-27, McCain was able to score on the inside to give SA a six-point lead with 5:13 left. Over the next couple of minutes, the Lady Panthers struggled to score against SA’s defense. As a result, the Lady Raiders were able to maintain a seven-point lead with a little over two minutes left. While TA struggled to score on offense, the Lady Raiders were able to run their motion offense to run time off the clock and work for a high-percentage shot.

As time kept winding down, the Lady Panthers continued to struggle offensively, but SA was able to add to their lead by making free throws down the stretch. McCain was able to knock down two free throws around the 1:00 mark to give SA a 42-32 lead. The Lady Raiders would get two more points from free throws and a final basket on a layup by Crisp to seal the 46-32 victory.

As for the Lady Panthers, they were led in scoring by Ali Strength with 10 points and Bryan chipped in nine points, including two three-pointers. With the loss, TA drops to 8-11 overall and 1-6 in the Region 3-AAA standings.

Up next for the Lady Raiders is a trip down to Albany to face the region’s first-place team: the Lady Knights of Deerfield-Windsor (19-3, 7-0). In the last meeting between these two rivals in Americus, DWS came away with a 45-30 victory on Thursday, January 16. Tip off from Albany is scheduled for Friday, January 31, at 6:30 p.m.

SA will then finish the regular season at home against Brookwood on Tuesday, February 4, at 6:15 p.m.