Rebounding a major factor in Hurricanes’ loss to UNC Pembroke 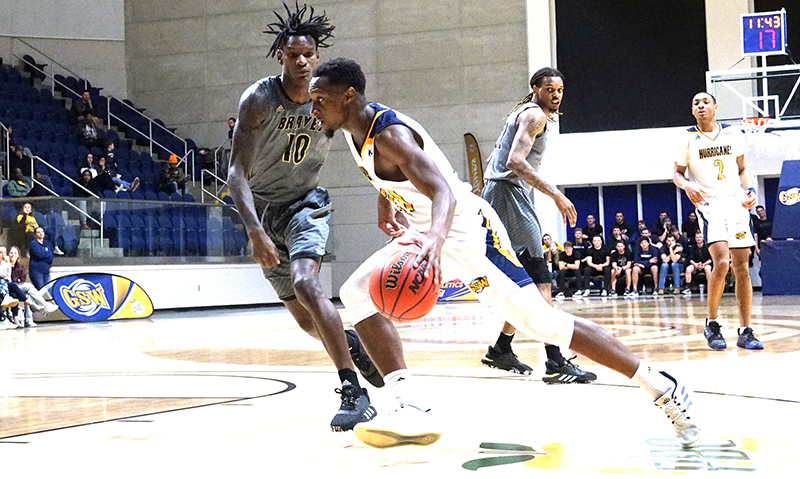 AMERICUS – The University of North Carolina at Pembroke (UNCP) pulled down 19 more rebounds than the Georgia Southwestern State University men’s basketball team on Saturday afternoon to control the pace of the game and hand the Hurricanes an 88-72 loss in the Storm Dome.

GSW suffered only its second loss at home this season (7-2) to fall to 8-8 overall and 3-7 in the Peach Belt Conference. UNCP won its fourth straight game to improve to 14-4 overall and 8-2 in the PBC.

GSW scored on its first three trips down the floor to briefly hold a 7-3 lead, its largest lead of the afternoon. The Braves responded with 13 unanswered points as GSW suffered through a five-minute scoring drought. UNCP expanded the margin to 19 points on two occasions in the first half before taking a 48-34 lead into the break. GSW found itself trailing by 14 points, despite shooting 54.2 percent over the opening 20 minutes.

UNCP opened the lead to 20 points less than four minutes into the second half and the Hurricanes couldn’t get any closer than 10 the rest of the way.

Both teams connected on at least 50 percent of their shots overall and UNCP added a 45.8 percent effort from long range. The Braves outrebounded GSW 41-22 and dished out nine more assists (17-8).

Jamari Dean and Abdul Dial led the Hurricanes in scoring with 21 points apiece. Dean connected on 8 of 12 field goal attempts and Dial sank 9 of 18 shots from the floor. Dean matched Devon Higgs for the team lead with six rebounds and also led the squad with three assists. Soloman Thomas was efficient. He made 6 of 8 shots, including three three-pointers, to score 15 points.

UNCP’s Tyrell Kirk made all five of his attempts from beyond the arc, and 9 of 13 shots overall to lead the Braves with 27 points. UNCP forward Akia Pruitt became the all-time PBC rebounding leader with his double-double on Saturday. Pruitt scored 12 points and snagged 10 rebounds. Shaun Kirk came off the bench to score 13 points for UNCP in the winning cause.

The Hurricanes host Columbus State (11-7, 6-4 PBC) on Wednesday, January 29, at 7:30 p.m. for Greek Night. It will also be State Farm Rally Towel Giveaway for the first 1,000 fans thanks to local agents Ginger Starlin, Marty McDonald and William Bailey.