In spite of second-half run, Hurricanes lose at home to Cougars 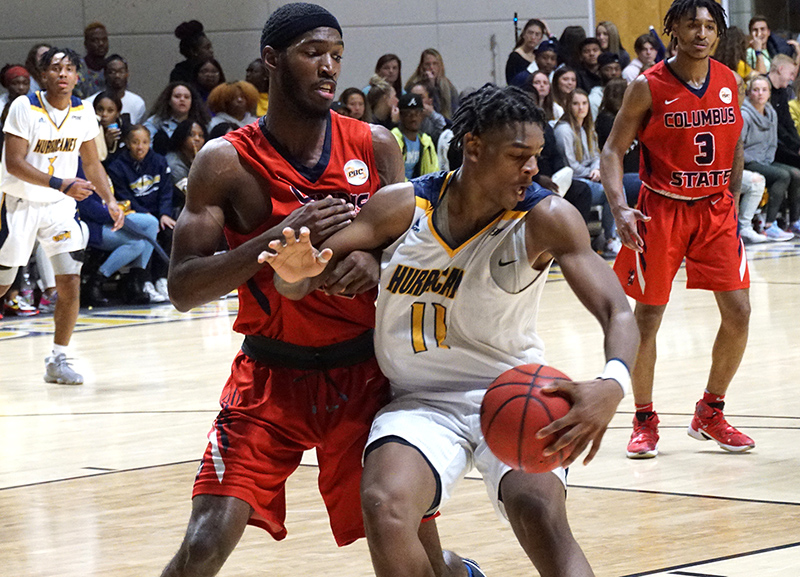 AMERICUS – In spite of a late second-half run by the Hurricanes to try and salvage a victory, Columbus State University (CSU) never trailed and took advantage of 31 bench points to defeat the Georgia Southwestern State University men’s basketball team 89-82 on Wednesday, January 29, in the Storm Dome.

GSW suffered back-to-back losses at home for the first time this season to fall to 8-9 overall and 3-8 in the Peach Belt Conference (PBC). On the other hand, the Cougars have now won four of their last five games. They are now 12-7 overall and 7-4 in the PBC.

CSU opened up a 21-13 lead midway through the first half, while the Hurricanes suffered through a three-minute scoring drought plagued by three turnovers and three missed shots. The Cougars stretched the margin to 40-24 at the 3:59 mark of the first half and led 44-32 at halftime.

The Hurricanes pulled to within eight points at the 12:22 mark, but couldn’t manage to get inside that number until the final minute of the half when an Abdul Dial layup made the score 84-78. The Hurricanes forced a CSU turnover on the next possession to get the ball back with 1:17 to go, but they were unable to score. The Cougars went on to seal the 89-82 victory at the foul line.

Both teams connected on at least 50 percent of their shots overall and GSW edged out CSU from long range (35.7 percent) compared to 35 percent. The Cougars held a slight 36-34 edge on the glass and dished out six more assists (16-10).

Jamari Dean fell a rebound shy of a double-double, as he led the Hurricanes with 23 points and nine rebounds. Dean made 10 of 14 shots and added three blocks on the defensive end of the floor. Dial scored 18 points behind seven of 12 shooting. Soloman Thomas chipped in 13 points and Jalen Cameron scored 12 for GSW in the losing cause.

Anthony Moore led all scorers with 24 points and added a game-high 11 rebounds for the Cougars.

The Hurricanes will try to end their three-game losing streak when they travel to Florence, SC on Saturday, February 1, to take on the Patriots of Francis Marion University. Tip off is scheduled for 3:30 p.m.