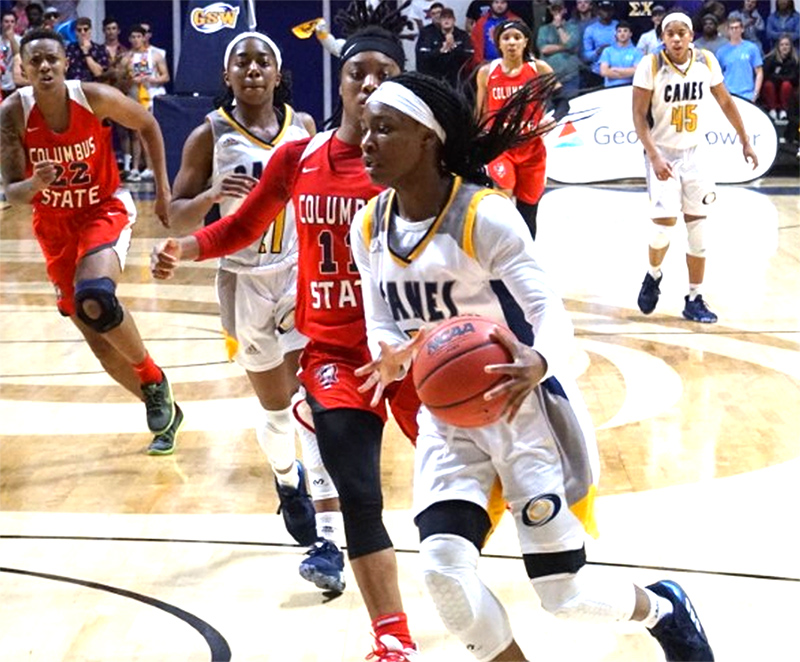 AMERICUS – After ending their two-game losing streak with a 60-55 win over UNC Pembroke, the Georgia Southwestern State University women’s basketball team (GSW) was hoping to continue their winning ways when they faced the Lady Cougars of Columbus State (CSU) in another Peach Belt Conference (PBC) matchup on Wednesday, January 29, at the Storm Dome. Unfortunately for the Lady Hurricanes, even though they made a 17-5 run in the third quarter to get back in the game, they were not able to overcome the deficit and fell to the Lady Cougars 76-68.

Two GSW players finished with a double-double. Lexi Chatman led the Lady Hurricanes with 21 points and 11 rebounds and Mariyah Trimble scored 15 points and grabbed 12 rebounds. GSW scored 28 points in the third quarter in hopes of making a comeback, but it was still not enough.

One minute into the opening quarter, Madison Johnson put GSW on the board with a layup, but that would be the last time that the Lady Hurricanes would enjoy a lead. CSU tied the game and took the lead on back-to-back possessions, as they went on a 15-0 run before Trimble was able to get GSW on the board. At this point, the Lady Hurricanes trailed 15-4 with 4:12 left in the first. After trading possessions during the remainder of the quarter, the Lady Cougars enjoyed a 24-11 lead going into the second.

With 8:35 left in the half, Chatman drained a three-pointer to cut the lead down to single digits, as CSU was still leading, 24-16. Unfortunately, that didn’t last long. The Cougars went on a 15-4 scoring run to go up 47-22 with 1:24 remaining in the half. Trimble added a layup and Jamesha Samuel drained a three-pointer, making the score 49-27 CSU.

Instead of shutting down, GSW opened the third quarter with a 7-0 run, which was sparked by a three-pointer from Yasmin Perez. However, CSU answered back with a short run of their own.

At that point, Samuel entered the game and knocked down three straight three-pointers, leading the Lady Hurricanes on 17-5 scoring run. As a result, GSW was able to cut their deficit down to 62-55 going into the fourth quarter.

Samuel also scored in double figures for the Lady Hurricanes, with 12 of those points coming on four three-pointers. K’Shouri Hodge also had a strong game for GSW. Hodge had a dominating performance inside the paint with five blocks and two steals.

CSU was led in scoring by Leeaysia Williamson, who went 10-for-10 from the free throw line and finished with 22 points. Chrisalyn Boston finished with a team-high 16 rebounds.

Up next for the Lady Hurricanes is a trip to Florence, SC on Saturday, February 1, to take on the Lady Patriots of Francis Marion University. Tip off is scheduled for 1:30 p.m.