GSW Baseball Team gets swept by Barry to start the season 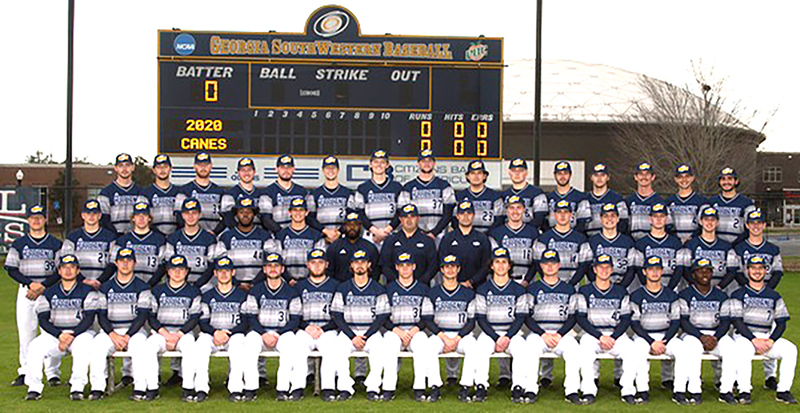 The 2020 Georgia Southwestern State University Baseball Team started the 2020 season off to a rough start by getting swept at home by Barry University. Photo by Chris Lind

The Georgia Southwestern State University Baseball Team (GSW) was hoping to get off to a good start when they began the 2020 season on Saturday, February 1, by hosting a doubleheader against Barry University (BU) out of Miami, FL. Unfortunately for the Hurricanes, BU swept GSW in three games. They swept the doubleheader on Saturday 8-5 and 6-2, and then took Game 3 on Sunday, February 2, by the score of 7-3.

In the opening game of the season on Saturday, GSW starting pitcher Tucker Smith took the loss. Smith pitched five innings and gave up seven runs on 11 hits. Six of those runs were earned. He also struck out two, walked none and gave up two home runs.

Frank Gonzalez got the win for BU in Game 1. Gonzalez pitched six innings and gave up no runs on two hits. He had d dominate performance on the mound, as he struck out six Hurricane batters.

In Game 2, BU jumped out to a 3-1 lead over the first three innings and went on to win 6-2. GSW starter Nick McCollum took the loss for the Hurricanes. McCollum pitched 3.1 innings and gave up five runs on seven hits. All of those runs were earned. He struck out three BU batters and walked two.

GSW infielder Gunner George had the most success at the plate in this game. George went 1 for 2 with a base hit, an RBI and drew three walks. Centerfielder Salik Williams went 1 for 3 at the plate with a run scored.

For BU, starting pitcher Myles Gaymon got the win. Gaymon pitched five innings and gave up one run on three hits. He walked three batters and struck out five.

In Game 3, things started out very well for the Hurricanes. They scored three runs in the bottom of the first inning to take a 3-0 lead. However, GSW wasn’t able to score any more runs for the rest of the game. The Hurricanes held BU scoreless until the top of the fourth inning, when the Bucs exploded for six runs, including an RBI double and a three-run home run. BU added one more run in the top of the seventh inning to win Game 3 by the score of 7-3.

Jacob Harrell and Devin Shea both went 2 for 4 for the Hurricanes in Game 3 and designated hitter Lucas Trebian went 1 for 2.

Wednesday’s home game against Florida Tech has been cancelled.

The Hurricanes will hit the road this weekend for a three-game series in Livingston, AL against the University of West Alabama. There will be a doubleheader on Saturday, February 8, with the Game 1 beginning at 2 p.m. EST. The final game of the series will be on Sunday, February 9, at 2 p.m.