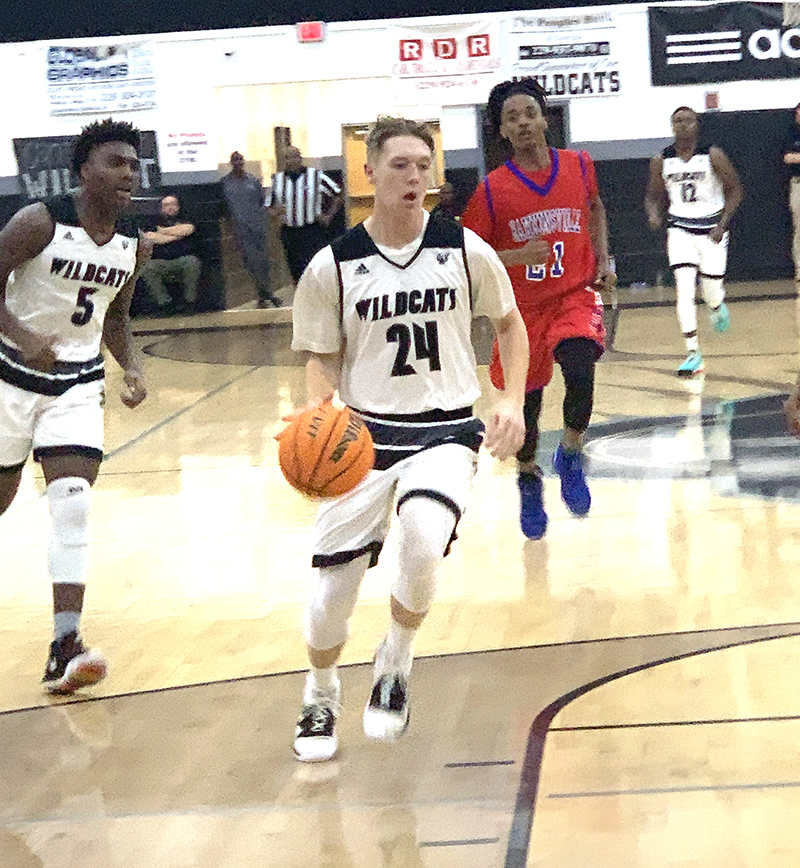 ELLAVILLE – Having lost starting point guard Deonte Cross to a contusion in his left leg, which he suffered in the Wildcats’ 45-39 loss to Marion County this past Saturday, the Schley County varsity boys’ basketball team (SCHS) had to fight a desperate Hawkinsville squad (HHS) with out him and his leadership. The Red Devils (0-25) came into Monday’s first-round game against the Wildcats in the Region 4-A Tournament determined to salvage at least one win on the season. Had it not been for two made free throws by Cameron Solomon with 5.4 seconds left, HHS might have done just that, but Alex Lumpkin’s desperation attempt at the buzzer was off the mark, and SCHS (13-8) escaped with a 41-39 victory.

“We tried to rest him (Cross) at least to try to get to Tuesday’s ball game,” SCHS head coach Ernest Scott said. “We made a lot of mistakes and you can’t make mistakes this time of the year. You’ve played too many games. It almost cost us the game. What can you say? Hawkinsville played hard. They got after it towards the end nearly pulled it off.” Scott went on to say that Cross will play in Tuesday night’s second-round game against Macon County. 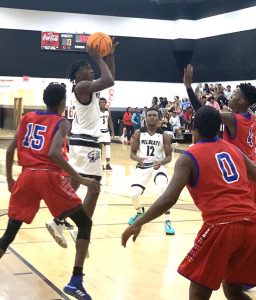 Schley County senior point guard Cameron Solomon goes up to hit a short jumper. Solomon sank two free throws near the end of the game to give the Wildcats a 41-39 victory over Hawkinsville. Solomon scored 10 points to lead the Wildcats in scoring.
Photo by Ken Gustafson

For much of the game, both teams flew up and down the court as if it were a track meet. As a result, both teams were out of control at times and both teams committed numerous turnovers. Both teams were able to force turnovers due to intense defensive pressure. However, though the Red Devils forced the Wildcats into committing numerous turnovers, they were not able to capitalize on those turnovers and, on many occasions, turned the ball right back over to the Wildcats.

This would end up proving to be their undoing, as they let numerous scoring opportunities slip away.

Solomon led the Wildcats in scoring with 10 points and made three of four foul shots. Two of those made foul shots near the end of the game ended up being the difference for SCHS. Dylan Taylor almost cracked the double-figure scoring column, as he scored nine points. Zamon Ross and Brandon Williams each scored six points for the Wildcats in the winning cause.

During the first minute of the game, both teams struggled to score the game’s first points, but the Wildcats were able to jump out to a 10-0 lead, thanks to baskets from Taylor, Solomon and Trypp Lumpkin. SCHS was able to use its defensive pressure to force the Red Devils into committing turnovers. As a result of that pressure, HHS struggled on the offensive end and didn’t get on the scoreboard until the 1:47 mark of the first quarter.

The early part of the second quarter was much like the first, as both teams struggled to score. However, the Wildcats continued their strong defensive play.

It was a half in which both teams struggled to score and numerous turnovers were committed, but thanks mostly to three-pointers from Taylor, Solomon and Lumpkin, SCHS enjoyed an eight-point edge. 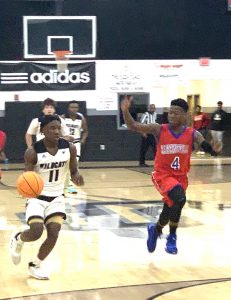 Cameron Solomon drives to the basket against the Red Devils.
Photo by Ken Gustafson

The Wildcats jumped out to a 30-16 lead to begin the second half, as they drove to the basket for points instead of settling for long outside shots. As the third quarter continued, SCHS continued to try to score by driving to the basket and getting layups in transition. However, even though they were able to draw fouls on the dribble drive, SCHS struggled at the foul line at times. Nevertheless, the Wildcats still had a 35-24 lead by the start of the fourth quarter.

The Red Devils stepped up their defensive pressure early in the fourth quarter and forced the Wildcats into committing turnovers. However, HHS was unable to capitalize on the offensive end committed numerous turnovers themselves.

However, with less than six minutes left in the game, the Wildcats were going through a scoring drought of their own and HHS was able to go on a 5-0 run to cut the SCHS lead to 35-29.

The Red Devils continued to intensify their defensive pressure and got another basket from Trayshawn Rawls off a turnover to cut the Wildcats lead to four. The Red Devils had numerous other chances to score, as their defensive pressure continued to cause SCHS problems. However, HHS could not capitalize, as they turned the ball right back over to SCHS on several occasions.

The Wildcats were able to score four unanswered points to take a 39-31 lead with less than two minutes to play. However, they couldn’t shake HHS. The Red Devils scored four unanswered points, capped off with two made free throws by Nemo West. With 1:10 to go, timeout was called with SCHS owning a slim 39-35 lead.

The Red Devils continued to use their swarming pressure defense to create turnovers and with 36.5 seconds left, they were able to score to cut the SCHS lead to 39-37. HHS forced another turnover and with 10 seconds left, Casson Clark scored a layup to tie the game at 39-39. However, with 5.4 seconds left in the game, Solomon was fouled while going to the basket and made two clutch free throws to give the Wildcats a 41-39 advantage.

There were still 5.4 seconds left on the clock for the Red Devils to salvage their season. Alex Lumpkin pushed the ball up the court and got off a desperation shot just a few fee past half court. Fortunately for the Wildcats, Lumpkin’s shot hit nothing but the backboard and SCHS escaped with a 41-39 victory.

“Thanks to those two free throws at the end, we were able to squeeze out of there with a victory,” Scott said.

Clark and Rawls each scored nine points to lead the Red Devils in scoring.

The Wildcats will continue their drive to a Region 4-A Tournament title when they play Macon County on Tuesday, February 4.