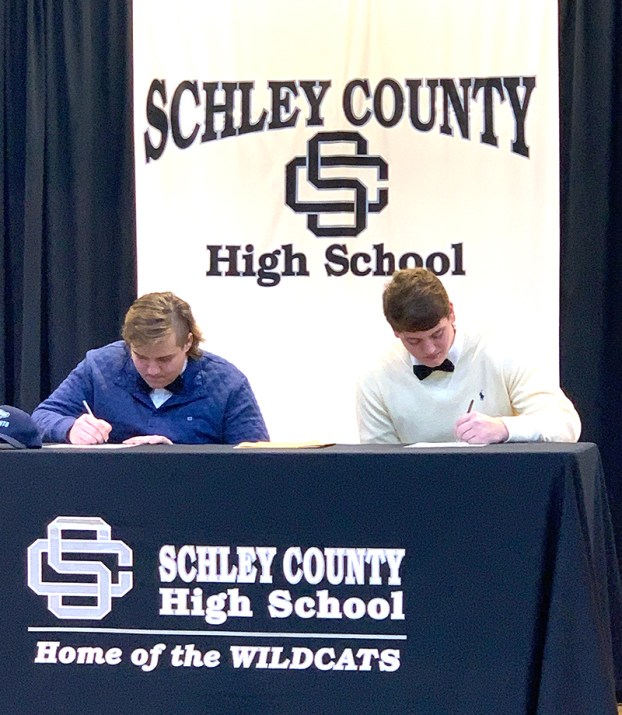 ELLAVILLE – Schley County offensive linemen Dakota Anthony and Peyton Howell both signed National Letters of Intent to continue their education and play college football. The signings took place on Wednesday, February 5, in front of their families, friends, teammates and coaches in the gymnasium at Schley County High School (SCHS).

Schley County Schools Superintendent Brian Hall remarked that both Anthony and Howell have worked extremely hard in the classroom and on the football field. “I’m very proud of their accomplishments and that we are able to recognize them today and see what the future is going to look like because they are going to carry a piece of Schley County with them,” Hall said. “I’m glad that when they go somewhere, we can say ‘That’s part of us’ because that’s very important.”

SCHS head football coach Darren Alford remarked that when he came to Ellaville to be the head coach four years ago, both Anthony and Powell were two of the original players that he coached and that they became part of the winningest senior class in Schley County history. Alford also remarked that both Anthony and Howell were two of the most committed players when it came to working out in the weight room.

Anthony, who played tackle on the offensive line, is going to Georgia Military College in Milledgeville. He has caught the interest of schools such as Kennesaw State, Georgia Southern and Georgia Tech. Anthony plans to major in Business and would like to open his own business after he graduates. As far as his most favorite memory while at Schley County, Anthony simply stated that his favorite memory from Schley County is making friends and forming special bonds with teammates.

Peyton Howell played center and nose guard on the offensive line for the Wildcats. Howell signed his letter of intent to continue his education and play football at Georgia Knights Prep Academy in Snellville. Powell stated that after he graduates from college, he would like to go into the teaching profession.

As far as his favorite memory of playing football at Schley County, Powell recounts the game against Dooly County this past season in which his teammate, Rodney hicks, was injured. The Wildcats went on to win that game 27-8.

Both Anthony and Howell were very instrumental in helping the Wildcats finish the 2019 season with an overall record of 7-5 and helping the team earn a berth into the second round of the GHSA Class A-Public State Playoffs.

AMERICUS – On Wednesday morning, February 5, Southland Academy running back Clay Owens made his decision as to where he... read more